Thirty-three DNA slides. A roll of duct tape. Textbooks outside a shed. Clothes mashed up in a bag found nearby with dirt, floor mat fibers, urine and “little glass beads,” the kind used to paint reflective safety markings on roadways. Then there’s the rope, which had some of her hair attached.

Newly released Grand Jury transcripts show that investigators have gathered mounds of physical evidence linking missing Morgan Hill teen Sierra LaMar and Antolin Garcia Torres—her suspected kidnapper and killer—even though nothing suggests the two knew each other before her disappearance in 2012.

At the end of Friday, Santa Clara County Superior Court unsealed transcripts from a secret Grand Jury hearing that took place throughout January and February and ultimately led to the indictment of Garcia Torres, 23, on charges of kidnapping and murdering Sierra, who was 15 when she disappeared March 16, 2012. Her body has never been found. Santa Clara County District Attorney Jeff Rosen decided in May to seek the death penalty for Garcia Torres, a first in the DA’s three and a half years in office.

The 19-member grand jury indicted Garcia Torres on Feb. 11, after hearing testimony from 50 witnesses and considering more than 40 evidence exhibits. The 1,900-page transcript, which was initially released only to media outlets that paid a fee of more than $1,000, provides new details about the DNA and other evidence that the sheriff and investigators have previously alluded to in statements about the case. The transcript also sheds more light on how investigators think Garcia Torres subdued Sierra and intended to erase physical evidence linking the two.

A length of rope containing at least one hair that belonged to Sierra is the “most significant find” in the trunk of Garcia Torres’ red 1998 Volkswagen Jetta, Santa Clara County Deputy District Attorney David Boyd told the Grand Jury. That discovery is one of many pieces of evidence that places the victim and suspect together inside Garcia Torres’ vehicle.

“I’m not going to talk to you about every single bit of DNA testing, fiber testing, fingerprint testing,” Boyd said. “We would be here until summer.”

Sierra LaMar went missing on her way to school in Morgan Hill.

Sierra vanished while walking to her school bus stop near the intersection of Palm and Dougherty avenues, according to investigators. She took a photo of herself at her mother’s house at about 7 am—just before leaving home that day. Investigators think this was the last photo ever taken of Sierra, and her friends and mother testified before the grand jury that she looked happy, her head tilted to one side and tongue sticking out.

Her remains have not been recovered, but investigators believe Sierra is dead based on the absence of any evidence that she wanted to leave her parents and friends, as well as her lack of independent financial means.

The back of her pants and the Sharks sweatshirt, found in her Juicy bag, were covered with dirt in a pattern that suggests someone dragged her by her feet with her back on the ground, Boyd told the grand jury.

“Her body has never been found except for minute portions of it in the form of hairs and skin cells with DNA in the defendant’s car,” he said.

Sierra’s mother and friends testified they had never heard of or seen Garcia Torres before his arrest May 22, 2012, and the missing teen had never mentioned him or anyone matching his description or vehicle. When sheriff’s deputies interviewed Garcia Torres in early April 2012—shortly after the investigation pointed in his direction—the suspect said he had never seen or heard of the teen before she disappeared.

Clint Van Zandt, a retired FBI investigator and behavior profiler, said the apparent lack of a relationship between the victim and suspect, combined with the DNA evidence, bolsters the DA’s case against Garcia Torres.

“That puts him in a position where he (has to explain) why he had contact and, in this case, potentially sexual contact with the victim,” Van Zandt told San Jose Inside. “That DNA evidence is the gold standard.”

The piece of rope with Sierra’s hair on it, and Garcia Torres’ semen found throughout the car, suggest that she was “tied up in the trunk of his car and he had some inappropriate sexual contact” with the teen, Van Zandt said. 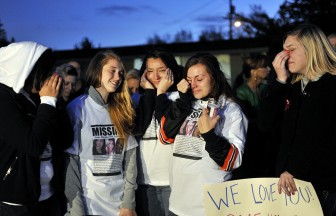 Another key to the case is whether or not investigators can place Garcia Torres geographically close to Sierra when she disappeared, he added. The grand jury transcript notes that surveillance video footage from Garcia Torres’ home on Monterey Road on March 16, 2012, shows that he left the home about 7am. His home was approximately eight miles from Sierra’s school bus stop.

Boyd noted during the hearing that Garcia Torres unwittingly gave up his possible “sexual motive” in interviews with investigators before his arrest. When deputies vaguely mentioned the possibility of DNA evidence and asked him about the subject, Garcia Torres said he ejaculated into a tissue, and threw this item out his car window while he was driving. He added he might have driven by the area where Sierra’s belongings—including her pants—were found, and the clothing might have had contact with the tissue.

Sierra’s family and volunteers who continue to search for the teen, who was a sophomore at Sobrato High School when she disappeared, said Monday they hope the new information will lead to renewed interest in the community to find more evidence for investigators and Sierra’s parents.

“We continue to urge people to volunteer to help continue to find clues,” said Sierra’s cousin, Keith LaMar. He said the family did not know about the rope, Sierra’s hair or most of the other evidence from the grand jury transcript.

“On the one hand, it’s like not knowing is the worst part,” he added. “Now that we have some clue as to what happened, it makes us feel better, and it answers some questions we had.”

Before Garcia Torres pleaded not guilty to the charges Feb. 22, his attorneys filed a successful motion to keep the grand jury transcript secret. However, the San Jose Mercury News earlier this month argued for the court to unseal the document to the public. That led to an unusual decision to unseal the documents at 5pm Friday, July 11, but only for media outlets willing to pay a court reporter fee of $1,036.80. Three local television stations and the Merc paid the fee rather than wait until the courthouse opened Monday morning to review the transcript in 30-minute increments.

After receiving complaints about a public document being made available only after receiving a four-figure payment, the court said it will review how it releases such information in the future.

“In the interest of fairness for all media outlets it would be preferable to make the releasing of documents available when they’re also in the public file,” court spokesman Joe Macaluso said.

The grand jury transcript also includes testimony related to three attempted carjacking attempts in Morgan Hill in 2009, which police linked to Garcia Torres after his arrest on the charges related to Sierra. Evidence in that case includes a fingerprint from Garcia Torres found on a battery inside a stun gun he used to attempt to subdue one of the female victims. The suspect dropped the stun gun at the scene, inside the woman’s vehicle, before he fled.

Roger Nelson, a volunteer at the Sierra Search Center at 17960 Monterey Road, said the regular searchers are determined to channel their anger into more focused, positive efforts.

“We have a pretty amazing group of people that turned that emotion of being upset into a motivation to bring Sierra home and to keep searching,” he said.

Correction: A previous version of this article incorrectly described the source of DNA found on Sierra LaMar's clothing. San Jose Inside regrets the error.