#SierraLaMar - judge just formally pronounced sentence. LIFE WITHOUT PAROLE He took a deep breath, looked down, then steeled his face and stared straight ahead 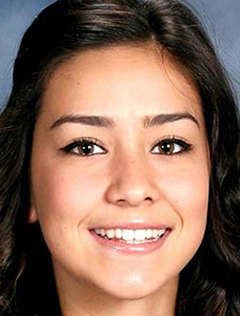 “You have robbed Sierra of what God had planned for her, and the lives she could have changed,” Marlene LaMar told her daughter’s killer, who listened inexpressively without eye contact, according to ABC7 Bay Area correspondent Chris Nguyen.

Prosecutors had sought the death penalty for Garcia-Torres, who was also convicted of attempting to kidnap three women from Safeway parking lots a few years before Sierra’s 2012 disappearance. But a jury decided on life without parole for the murder of the missing teen, whose body was never found.

Garcia-Torres, who was also ordered to register as a sex offender, reportedly plans to appeal his sentence. For real-time coverage of the sentencing, check out the #SierraLaMar hashtag on Twitter.

#NOW: "You have robbed Sierra of what God had planned for her, and the lives she could've changed" - Marlene LaMar to Antolin Garcia-Torres during her victim impact statement #SierraLaMar #SantaClaraCounty — Chris Nguyen ABC7 (@ChrisNguyenTV) December 12, 2017

Defense attorney Lopez says Antolin Garcia-Torres wanted to “address the court informally” but prosecution wanted it on the record, so Garcia-Torres’s will not testify. His attorney says he plans to exercise his right to appeal. #SierraLaMar