At least two courtrooms full of spectators—including the family of Sierra LaMar and dozens of volunteers who have been searching for the missing girl the last five years—let out an audible gasp of relief Tuesday when they heard the verdict. A jury of six men and six women found Antolin Garcia Torres guilty of the Morgan Hill teen’s murder.

The capital murder trial, which started in January, resulted in four guilty verdicts against Garcia Torres, 26. In addition to finding him guilty of murdering Sierra, who was 15 when she disappeared in March 2012, the jury also convicted Garcia Torres on three counts of attempted kidnapping during the commission of a carjacking in relation to three incidents in the parking lots of two Safeway stores in Morgan Hill in 2009.

All four counts are felonies, but the jury’s work is far from done. Jurors will also decide Garcia Torres’ fate in the trial’s penalty phase. The Santa Clara County District Attorney’s Office is seeking the death penalty, and the jury will determine if Garcia Torres will be put to death or spend life in prison without the possibility of parole, prosecutor David Boyd said outside of the courtroom at the Hall of Justice in San Jose.

“We’re grateful for the jurors—we think they made the right decision,” said Marlene LaMar, Sierra’s mother. “It gives us peace as a family, knowing it’s not going to happen to another child.”

“We don’t have Sierra, that’s the bitter part,” he said. “But justice is served today, for us (and) for Sierra. That gives us some form of relief, but it will never take away our grief. That will be with us forever.”

The parents were flanked by a large group of family members, including daughter Danielle LaMar, and dedicated search volunteers.

Sierra moved to Morgan Hill from Fremont with most of her family about six months before she disappeared. Her father still lives in Fremont, and Sierra continued to spend time with him after she moved.

Authorities believe Garcia Torres kidnapped Sierra while she was walking to her school bus stop at Palm and Dougherty avenues in north Morgan Hill the morning of March 16, 2012. He killed her hours after abducting her and disposed of her remains in a discreet location that still has not been located, Boyd said numerous times throughout the trial.

Without a body or murder weapon, the DA’s case against Garcia Torres relied heavily on trace DNA evidence found in the defendant’s Volkswagen Jetta, and on Sierra’s belongings that were found off a road near her neighborhood in the days following her disappearance.

Those belongings include her phone, found by itself in a field less than a mile from her home, and her bag containing personal items and the clothes she was wearing when she left home that day, according to authorities. Garcia Torres discarded these items shortly after he kidnapped Sierra, Boyd said.

Garcia Torres’ defense team tried to convince the jury that Sierra ran away from home. They also attempted to sow doubt on the DA’s case by arguing the DNA evidence was not conclusive and was mishandled by detectives and county crime lab experts who processed it.

Without Sierra’s body or a murder weapon, Boyd used his closing rebuttal last week to urge the jury to “reject the unreasonable, accept the reasonable” explanations for Sierra’s disappearance, fingerprints, DNA traces and other evidence that connects Antolin Garcia Torres to the crimes.

“Sometimes, to support a weak argument, (people) use gimmickry to distract you from the facts,” he said, likely referring to statements made the previous day by defense attorney Al Lopez in the Hall of Justice courtroom. Lopez displayed a “bucket of shame” to the jury during his closing argument to illustrate the reasons Garcia Torres is not guilty.

Hundreds of volunteers over the last five years have scoured South County looking for a sign of Sierra’s whereabouts. Steve LaMar said these volunteers, who have come from across the Bay Area, are a “special group of people” who have become “lifelong friends.”

More than 100 family members, volunteers, searchers, members of the media and court spectators attended the reading of the verdict Tuesday. The court had to open an additional courtroom with a closed circuit television broadcast of the verdict to accommodate the crowd.

Garcia Torres’ defense attorneys declined to comment on the verdict as they left the courthouse.

The trial ended last Thursday after 13 weeks of testimony. The jury deliberated for about a day and a half before notifying the judge on Monday that they had reached a unanimous verdict.

Despite experiencing some relief from the verdict, a core group of searchers do not plan to stop looking for Sierra.

They want to continue searching “to bring Sierra home to her family,” Nelson said. “The LaMars deserve justice.” 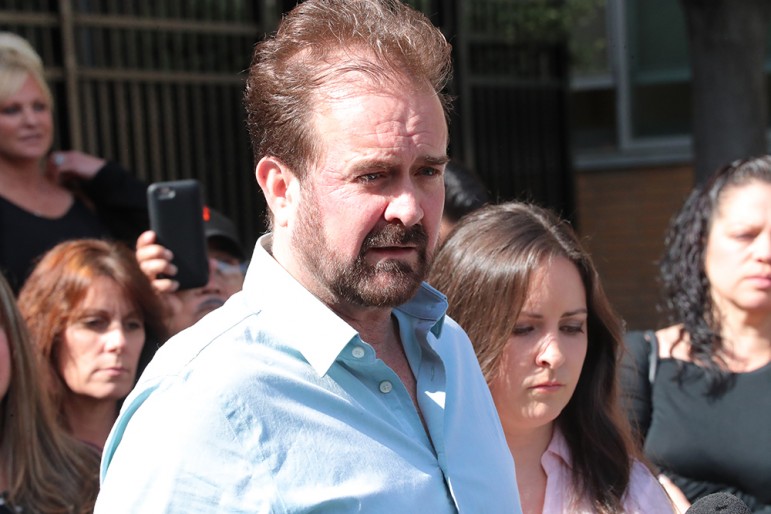 Proud racist Richard Spencer went viral after being punched in the face during a January interview. (Photo by Robert Eliason)