UPDATE: Santa Clara City Manager Julio Fuentes was up for a closed-session performance evaluation Tuesday, the day of the mayor's abrupt resignation.

“It has been the greatest honor of my life to have served as Santa Clara’s mayor,” said 53-year-old Matthews, who has nearly three years left in his term. “Now it’s time for me to focus on my family and look forward to the next chapter of my life.”

His health, he said, had nothing to do with the decision. No mention was made of the civil grand jury investigation into the city’s Stadium Authority, which oversees operations at the game-day venue, Levi’s Stadium. Nor of the fact that just days after the Super Bowl, Santa Clara stands to lose its two top officials.

Matthews' resignation, effective Tuesday, came on the same day City Manager Julio Fuentes was up for a closed-session performance evaluation. Fuentes, who took the $290,000-a-year job only three years ago, reportedly cited a hostile work environment. 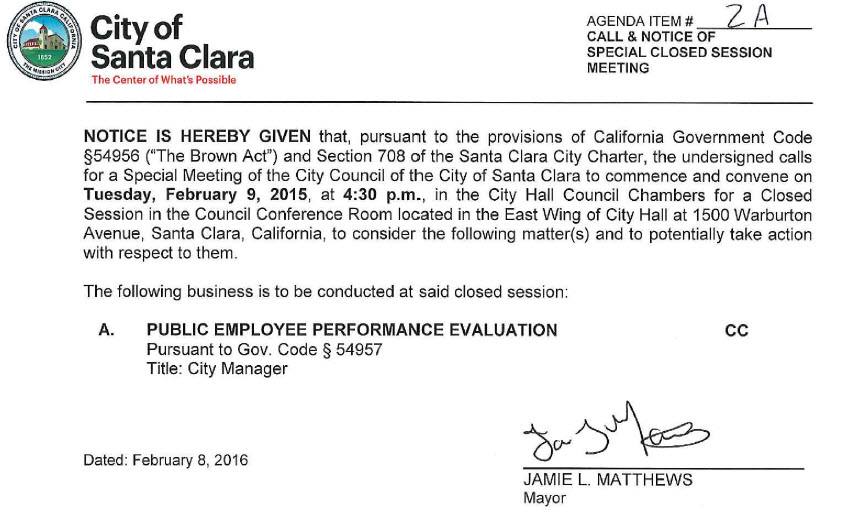 Matthews also failed to address the timing of his announcement, which took even his close colleagues off guard. There’s some suspicion that something happened on game day that led to his surprise announcement.

A New York Times profile published just before Sunday’s game noted that Matthews—who said he knows nothing about football—might be the only mayor in the nation to host the Super Bowl with no interest in attending the event. He must have changed his mind.

In a post-game wrap-up that ran in Monday’s print edition of the Mercury News, columnist Mark Purdy wrote that the mayor “watched the entire afternoon and evening unfold from the SAP Suite Tower” Sunday. 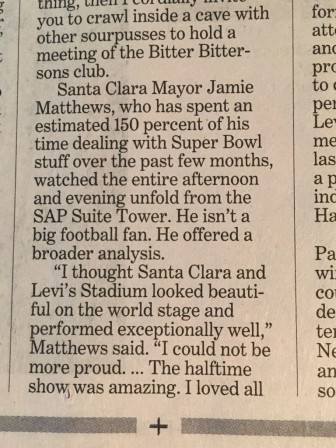 Hours later, the story was updated online to indicate that Matthews visited the stadium before the game to show face and thank staff, but then “headed home at kickoff time to watch on television.”

Maybe it’s nothing. Or maybe the mayor thought twice about being on the record as a Super Bowl attendee with a luxury suite pass valued at anywhere from $10,000 to $20,000. Accepting a gift of such extraordinary value would flout state and local election laws, which limit perks to $460 in a calendar year.

Attempts to reach Matthews through city spokeswoman Jennifer Yamaguma were unsuccessful as of press time.

Vice Mayor Teresa O’Neill will serve as interim mayor until the council appoints a successor or sets up a special election to let voters decide. Matthews said he felt proud of his city of 120,000 for hosting the nation’s biggest sporting event, but that it’s time for him to slow down.

Matthews retired last year after a 30-year career in San Jose’s code enforcement division. In Santa Clara, his hometown, he spent four years on the Planning Commission. Over the past 26 years, he was elected three times to the City Council and twice as mayor.

In Santa Clara, serving on the council is a part-time job, and the mayor has said that he has no intention using his post as a stepping-stone to higher office.

Below is the full press release from the city of Santa Clara:

The day after the Bay Area successfully hosted the 50th Super Bowl, Santa Clara Mayor Jamie Lee Matthews stunned reporters in attendance at a post-Super Bowl press conference by announcing he would be retiring as the Mayor effective this evening. "It has been the greatest honor of my life to have served as Santa Clara's Mayor. Now it's time for me to focus on my family and look forward to the next chapter of my life."

Matthews recently retired from the City of San Jose after a 30 year career and has served Santa Clara for 20 years; serving four years as a Planning Commissioner and, over 26 years, was elected three times to the City Council and twice as Mayor.

City Manager, Julio Fuentes shared his congratulations to the Mayor and stated, “Jamie has been a second-to-none Mayor, one of the best Mayors I have ever worked with during my career. I wish him and his family the very best during his well-deserved retirement.”

Vice Mayor Teresa O’Neill will preside over the Council effective Tuesday, February 9, 2016. The Council has 30 days to appoint an interim Mayor or the office of Mayor will be included on the ballot during the November 2016 election.