Seven people died from domestic violence last year in Santa Clara County, according to a new report from the District Attorney’s Office. Five of them were victims and two were perpetrators. All took place in San Jose.

The number represents a decrease from the year prior, when 13 people died in domestic violence-related incidents. It also falls below the 22-year average of about a dozen a year for this county, according to Wednesday’s report.

For the third time in as many years, one incident involved a murder-suicide of a long-married couple. But unlike the cases in 2014 and 2015, last year’s case involved a female perpetrator and male victim.

The incident took place Nov. 3, when authorities say a woman killed her spouse by bashing him repeatedly on the head with a dumbbell. His death went undiscovered for two weeks—a day after the woman was found dead in her car, likely from poisoning herself. The husband’s body was dismembered and frozen in the trunk of her car.

In 2016, five perpetrators killed five victims. Of those five killers, three survived and face murder charges. One, the woman with the dumbbell, committed suicide. Another committed suicide-by-cop. 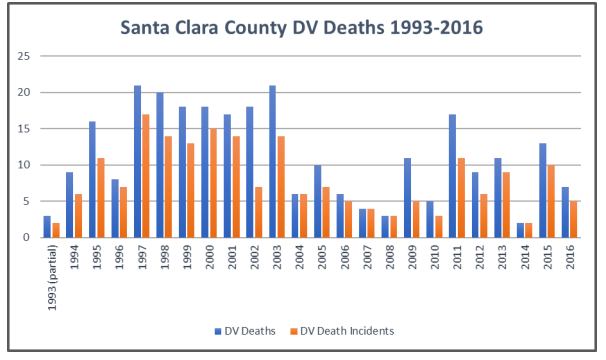 The so-called blue suicide took place March 7 of last year. That evening, the suspect showed up to his estranged wife’s house and confronted her male friend. The wife tried to intervene, reminding her husband that he was subject to a stay-away order from a pending domestic violence case.

But the husband pulled out a knife and attacked the woman’s friend, inflicting wounds that killed the man two weeks later. The husband also assailed his wife, inflicting non-lethal injuries. The suspect, who was armed with a second knife, was shot and killed by police some hours later.

The first domestic violence death of 2016 involved a same-gender couple. On March 3 last year, a 9-1-1 dispatcher got a call from a man reporting that his friend was dead. The man told police that he’d gotten into a fight with the victim and hit him too hard. The victim had significant bruising all over his body, and an autopsy concluded that he died of blunt force trauma.

Cops were called to the couple’s home repeatedly over several years. But because the couple wasn’t open about their relationship, police failed to recognize signs of domestic violence and never referred them to a shelter or intervention.

While the report commends law enforcement for becoming more effective at identifying domestic violence, it says more work needs to be done to recognize signs in same-sex and gender non-conforming relationships.

On Christmas Eve, another perpetrator called 9-1-1 to report his partner’s death. Shortly before 7pm, a man dialed dispatchers to tell them that he had just stabbed and killed his wife. According to the report, the wife was found lying on the kitchen floor with several stab wounds to her chest.

Police say the kitchen was otherwise undisturbed and that it looked as though the woman had been baking. The husband was the subject of a “peaceful contact” criminal protective order because of an open domestic violence case.

One of the cases in 2016 involved a gun. The afternoon of April 30 last year, a man called 9-1-1 to report that he had shot his wife in the face. Police found that the suspect bought the firearm a couple weeks before the incident. He reportedly believed that his wife was cheating on him.

As in past years, the death review stresses the importance of finding ways to prevent domestic violence fatalities. That involves keeping an eye out for important indicators, according to report.

The 2016 cases validated the prevalence of known risk factors, per the review. Those include joblessness or under-employment, prior violence, victim’s fear of the perpetrator, jealous or controlling behavior, weapon use, previous death threats, few friends outside the relationship, stalking and past strangulation.

The review underscores the importance of taking action when one recognizes signs of abuse. In three of the five relationships in which someone was killed, family and friends knew about past violence or controlling behavior by the perpetrator.

“We all have a responsibility to speak up when we see the signs of domestic violence,” Assistant District Attorney Cindy Hendrickson said. “It is a destructive crime that strikes within all our communities regardless of age, money, ethnicity, gender. It’s vital that we identify it before the coroner gets called. Delay can be deadly.”

Last year, local agencies referred 5,101 domestic violence cases to the DA—an uptick of 815 from the year prior. Of those, 55 percent resulted in criminal charges—a decrease from 63 percent the year prior.

In 2017, the county is on pace to surpass the number of deaths last year. Local law enforcement has reported four domestic violence deaths in the past three weeks alone.