With Santa Clara County set to expand quarantine support for low-income people who test positive for Covid-19, advocates are calling for a dramatic overhaul of the service—and far more transparency about how it’s administered.

On Tuesday, the Board of Supervisors will vote on whether to extend the subsidies to more cities. The referral introduced by Supervisor Susan Ellenberg and co-signed by board President Cindy Chavez also asks that the county disclose some key data points—such as turnaround time from application to payment—that have been conspicuously absent in the five months since launching the program.

“While the current Santa Clara County Covid-19 response team provides critical isolation supports, anecdotal information across the Bay Area and in highly impacted Latinx communities indicate there are fears about job loss and lost wages as a deterrent to testing,” Ellenberg’s memo states. “With widespread economic pain in the community, expecting individuals to forego income and stay home from work if they test positive may be unrealistic without immediate connections to supports and timely receipt of aid.”

Despite repeated assurances that it would provide information about turnaround times, funding availability and the number of applicants who applied for isolation support compared to the number who actually received it, the county has yet to release any.

Deputy County Executive Ky Le, who blew past promised deadlines to share those metrics twice last month, told San Jose Inside they would be available this past Saturday. After the weekend came and went, he said the data is still “under review.”

When someone tests positive for Covid-19, the orders are consistent across the board: stay home, isolate for two straight weeks. Of course, the ability for people to comply varies wildly depending on their job, wages and where they live.

Folks who work from home can hunker down and order groceries online. For low-income workers, the call to quarantine can cost them their job or enough lost wages to make basic necessities out of reach. That’s why the county began offering financial help for Covid-positive people who otherwise can’t afford to take time off.

Since launching the service in July, however, the county has struggled to extend those desperately sought subsidies to the people who need it. Payments that should come in a matter of days to be effective are reportedly taking months to be doled out.

Brett Bymaster, head of Healing Grove Health Center, a nonprofit clinic that serves San Jose’s Washington neighborhood, said that disconnect is what is causing the virus to spread at such a rapid pace among the South Bay’s Latino and minority populations.

“Say you test positive,” Bymaster said in a recent phone call with San Jose Inside. “We tell you to stay home and we’ll deliver food, we’ll connect you with a nurse and we give them the county hotline—right now, that’s as much as we can do.”

The county’s supposed to take the baton by extending financial aid.

“From what we’re seeing,” Bymaster said, “that’s just not happening.”

A survey by Healing Grove found that only 18 percent of 118 low-income people who tested positive for Covid-19 from August through October actually got financial help from the county. Brett Bymaster, who co-founded Healing Grove in January with his wife, Dr. Angela Bymaster, said the problem lies in the way the county screens for applicants.

Requiring beneficiaries to provide email, lease agreements, landlord ownership verifications, detailed pay information, identification and birth certificates for everyone in the family excludes many of the neediest people. In the absence of timely help, an untold number of South Bay residents—disproportionately people of color—must choose between losing their paycheck in quarantine or going to work while infected.

“The threat of poverty and homelessness is enough for people to make decisions—logical decisions—that spread the disease,” Bymaster explained. “The question we’re asking is: how can we break that cycle?” 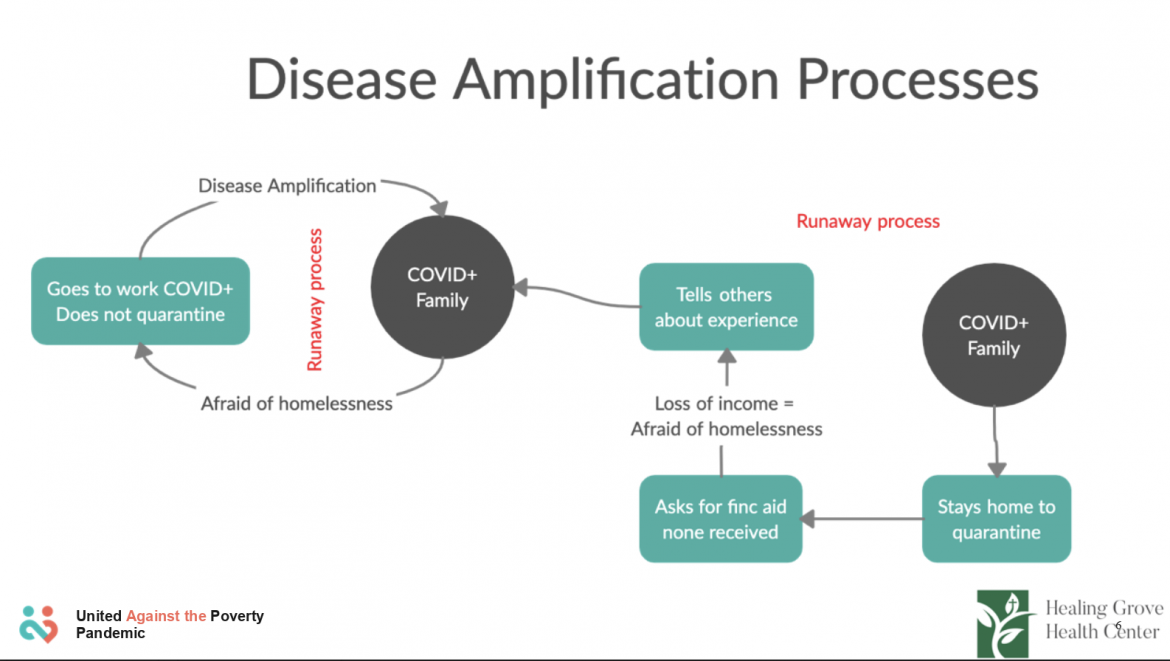 The referral going before the county board Tuesday directs county staff members to strike up new partnerships with nonprofits and community clinics that are already testing and caring for high-risk populations. Potential collaborators include clinics such as Healing Grove, Roots, Gardner, Asian Americans for Community Involvement and Ravenswood.

“These partnerships could manage isolation support needs for any of their identified patients and their household members, or could receive additional referrals from the county team should the volume of referrals exceed the capacity of the county isolation and quarantine program team,” the Ellenberg memo suggests.

For the Bymasters, the push to bolster isolation supports is part of a broader initiative they’re spearheading called United Against the Poverty Pandemic. A study published this fall as part of that effort underscored how the novel coronavirus has deepened Silicon Valley’s existing inequities and proposed solutions for addressing the crisis.

“Economic inequality exploded within the first weeks of the shelter-in-place ruling,” reads the report, which was published in October. “Professionals who could telecommute to work maintained steady income, but low wage workers in hospitality, construction, and food service were ordered to stay home without pay. Tens of thousands of families worked security for concerts and football games or cleaned entertainment venues; those industries have closed and have not come back, leaving families in abject poverty with little hope for employment or income.”

The report notes that even before the pandemic, tens of thousands of minimum-wage-earning families in Silicon Valley lived paycheck-to-paycheck, making an average of about $27,500 while paying $18,600 in rent.

When Healing Grove surveyed those same families after the Covid-induced shutdown this past spring, they reported making just $220 a month on average. When polled again in September, that monthly salary rose to just $950.

Now, with vast portions of the economy encumbered by public health orders and a statewide eviction moratorium set to expire next month that will require people to pay at least a quarter of past-due rent, the report estimates that 14,600 households in Santa Clara County—53,600 individuals—could become homeless without intervention.

If each of the 160,000 households that the U.S. Census Bureau reports making more than $200,000 a year donated $730, they could erase the entire $117 million in back rent owed by the poorest households in the South Bay, the Poverty Pandemic study determined. In addition to donating to erase rent debt, the report calls on people to hire people who have lost jobs and income during the pandemic.

ICuro CEO Bippin Thomas, another member of the initiative, also spoke about his commitment to giving jobs to displaced workers as his company comes up with ways to address the sanitization products and services needed for reopening.

Meanwhile, Bymaster and his coalition ask public agencies to improve collaborations with nonprofit service providers. Extending county funding to Healing Grove and clinics like it is one way to do that, he said, since those groups are already plugged into the communities hardest-hit by Covid-19.

Esparza, whose district encompasses the neighborhood that Healing Grove serves, said more needs to be done to ensure that resources reach people who need it. “Inequities that were already stretching our communities to the breaking point before the pandemic,” she said, “are now, literally, an existential threat for thousands of families in San Jose.”

The Board of Supervisors meets at 9:30am Tuesday. Click here to read the referral about expanding isolation support and here to view the full agenda.