Healing Grove spent a month gearing up for the Covid-19 vaccine.

The nonprofit health center, which serves mostly impoverished and undocumented Latino clients in San Jose’s Washington-Alma neighborhoods, invested in infrastructure upgrades, including a new generator. It installed temperature monitors to avoid any vials going to waste and strategized how to transport Moderna doses in a refrigerated truck. A couple new staffers joined the team to oversee distribution.

After reports about chills, fevers and nausea after inoculation, the clinic planned to administer them only after half-hour counseling sessions about how to brace for it. Staff might suggest that spouses take turns getting vaccinated in case one experiences an adverse reaction and needs help with childcare.

On Jan. 22, the California Department of Public Health (CDPH) affirmed in an email that Healing Grove checked all the boxes to deliver the vaccine: “Your application as a Covid-19 provider has been approved!” It concluded: “Your participation as a vaccinating provider is critical to ensuring Covid-19 vaccination services are accessible to the initial populations of focus shortly after the first Covid-19 vaccine doses arrive.”

Weeks passed without guidance from either the state or Santa Clara County. Now, with the state putting Blue Shield in charge of immunization, Healing Grove’s husband-and-wife founders, Dr. Angie Bymaster and Executive Director Brett Bymaster, say they’re unsure how to proceed—or whether they’ll be able to obtain vaccines at all.

“My biggest disappointment,” Brett Bymaster tells San Jose Inside in a phone call Monday, “is that after a year of social unrest and so much talk about equity, we’re in this situation. We can’t control who gets Covid, but we can control who gets the vaccine. And the people who need it the most aren’t getting it.”

On the Front Lines

Delays, confusion and shortages have plagued California’s coronavirus immunization effort overall, but especially for community health clinics. These small, nonprofit health centers serve the poorest 20 percent of the state’s population, mostly in underserved Latino and Black communities where low-wage jobs and crowded homes make them disproportionately susceptible to the coronavirus.

Yet in the South Bay and beyond, immunization has so far failed to meet the needs of those communities, leaving the most vulnerable residents last in line to get the coveted vaccine. Latinos comprise a quarter of Santa Clara County’s population and more than half of its Covid-19 infections. As of Tuesday, that population had received just 10 percent of the 234,457 vaccines administered locally. A similar trend holds true the state over.

When California initially began recruiting vaccine providers last fall, the invitations went to hospitals and counties, whose size and resources enabled them to quickly inoculate people en masse. Over the ensuing months, as data revealed disparities in distribution, an association of local clinics urged Gov. Gavin Newsom to extend doses to community health centers on the front lines of the pandemic.

The California Primary Care Association (CPCA), which represents 1,400 community health centers, sent a stern letter to the governor last month about prioritizing small clinics. “We are asking the governor to ensure that vaccine distribution recognizes the higher burden of the disease in disproportionately impacted communities—including Black, Asian and Pacific Islander, Indigenous and Latinx persons—and places those groups at the center of Covid-19 response and recovery,” CPCA President Carmela Castellano-Garcia wrote in an announcement about the demands. 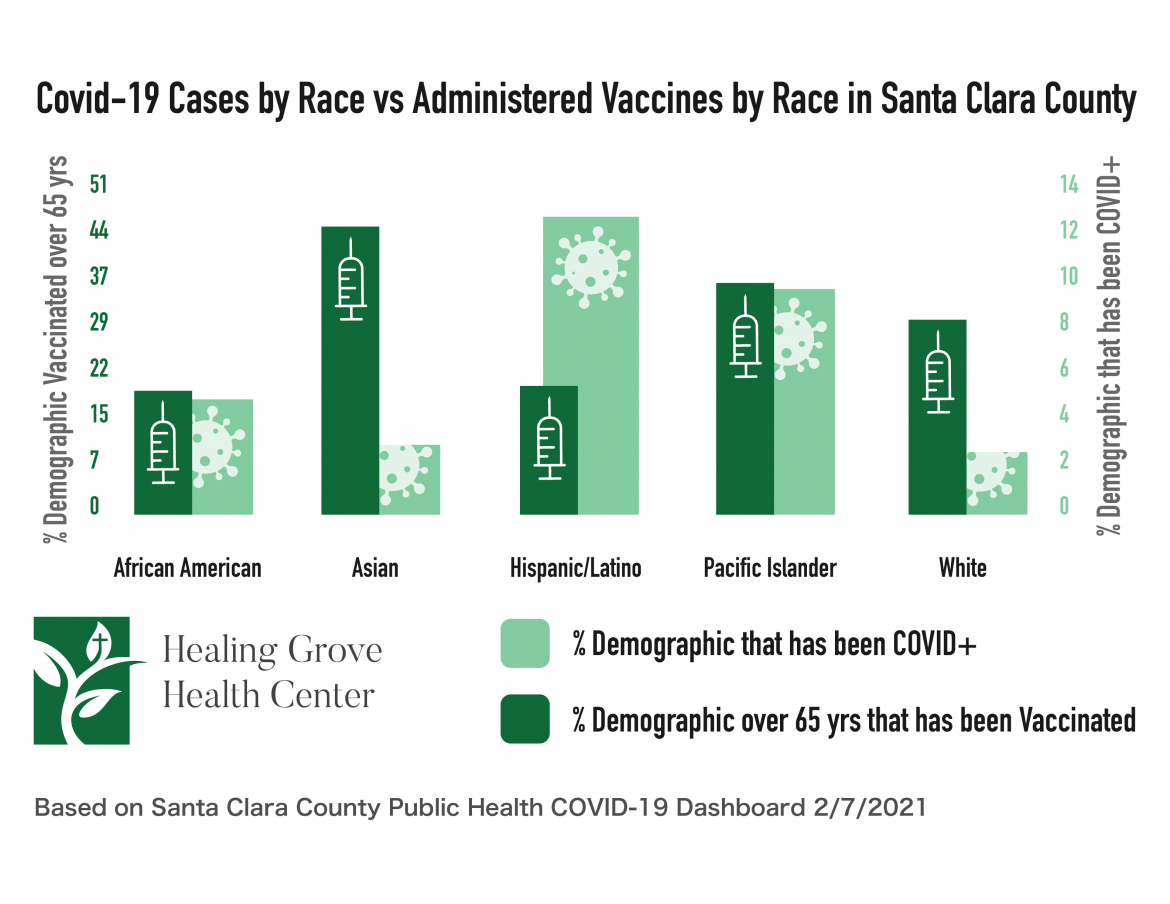 As February closed in and California continued to expand inoculation efforts, Healing Grove implored the Santa Clara County health officials for some direction.

Dr. Bymaster wrote Jan. 28 about how the clinic has provided coronavirus testing and support services to thousands of “extremely low-income, mostly Spanish-speaking, mostly uninsured, mostly undocumented people”—the hardest-hit demographic by an order of magnitude. She pleaded for clarity about how to proceed with vaccinations.

Patricia Salmon, one of the county’s vaccine distribution managers, replied a few hours later to say she had no information to give.

For weeks preceding Blue Shield’s takeover of vaccine distribution, the county had been making decisions about how to divvy up hundreds of thousands of doses.

But Gov. Newsom’s abrupt decision to put Blue Shield in charge of the distribution network made the county’s role uncertain. “If Blue Shield will be allocating directly to health systems, we at the county may not be informed of, or even involved in, any decision-making,” Salmon wrote.

According to County Executive Jeff Smith, Healing Grove was excluded because it’s not a federally qualified health center (FQHC), which is a U.S. Health and Human Services designation that reimburses the cost of treating Medi-Cal patients.

“We made it pretty clear that for our distribution it’s going to our federally qualified partners,” Smith said. “Lots of doctors would like to have distribution, but we’re only doing this with our partners.”

That was news to the Bymasters, who noted the county gave non-FQHC organizations, including Planned Parenthood and Roots, access to the vaccine.

“We believe they should go to all clinics that serve niche populations and that have developed relationships with folks,” she said.

Blue Shield and CDPH have affirmed the critical role of clinics in achieving equity, Patterson said, but have yet to explain the logistics of how to incorporate them into its new network and data system, called MyTurn. If Blue Shield “flips the switch” too soon, she said, it could leave small clinics out of the loop entirely.

Not that the status quo has been all that inclusive.

Time and travel constraints faced by needy families working multiple jobs prevent an untold number of people from trekking to the South Bay’s biggest vaccination site at Levi’s Stadium. Communication barriers mean word about pop-up sites may not reach the intended audience. Even if fast-expiring doses become available on short notice—like when the county saw 4,500 vaccination no-shows last week—they’re more likely to go to people privileged enough to be in the know.

“This is a public health crisis and the providers in places where there’s the most need, that’s who you want to be vaccinating,” Patterson said. “With this Blue Shield model, we’re continuing to push them on this.”