When Coyote Creek flooded thousands of people out of house and home earlier this year, local officials were slammed for failing to prepare for or warn people about the disaster. After initial finger pointing between the city of San Jose and the Santa Clara Valley Water District over whom to blame for the estimated $100 million in damage, the two agencies spent the ensuing months working together to bolster defenses against future floods.

The district expects to complete the Rock Springs projects by the end of December.

Earlier in the summer, the agency also repaired a levee at the South Bay Mobile Home Park by Old Oakland Road—another neighborhood hit the hardest by the February flood.

Though the barriers won’t eliminate flood risk in the low-lying area, officials say they will prevent the kind of devastation that left hundreds of people homeless after the record flood on this year’s President’s Day weekend.

As the district ramped up work on immediate flood protections, it also renewed a lobbying effort for long-term capital projects. During a trip to Washington D.C. in the spring, the district’s board of directors got the U.S. Army Corps of Engineers to consider studying the feasibility of a federally backed flood protection project. Corps officials followed up with a trip to Rock Springs in August, going on a tour of the neighborhood where 2 feet of floodwater had submerged a playground six months prior.

According to the district, the two agencies are finishing off an agreement to commence with the feasibility study.

Jeffrey Hare, an attorney whose Naglee Park neighborhood was inundated by the February flood, said he’s especially heartened by the district’s flood prevention measures for the Anderson Reservoir.

On Oct. 10, the water agency’s governing board agreed to operate the reservoir at 40 percent capacity to prevent flooding downstream. Coyote Creek floods when the reservoir spills over the dam, but installing pumps to prevent spillover would cost up to $5 million a year, according to the district. It’s far cheaper to simply keep the water levels low.

“That was a very positive measure,” Hare told San Jose Inside. “I have a better feeling about next winter now.” 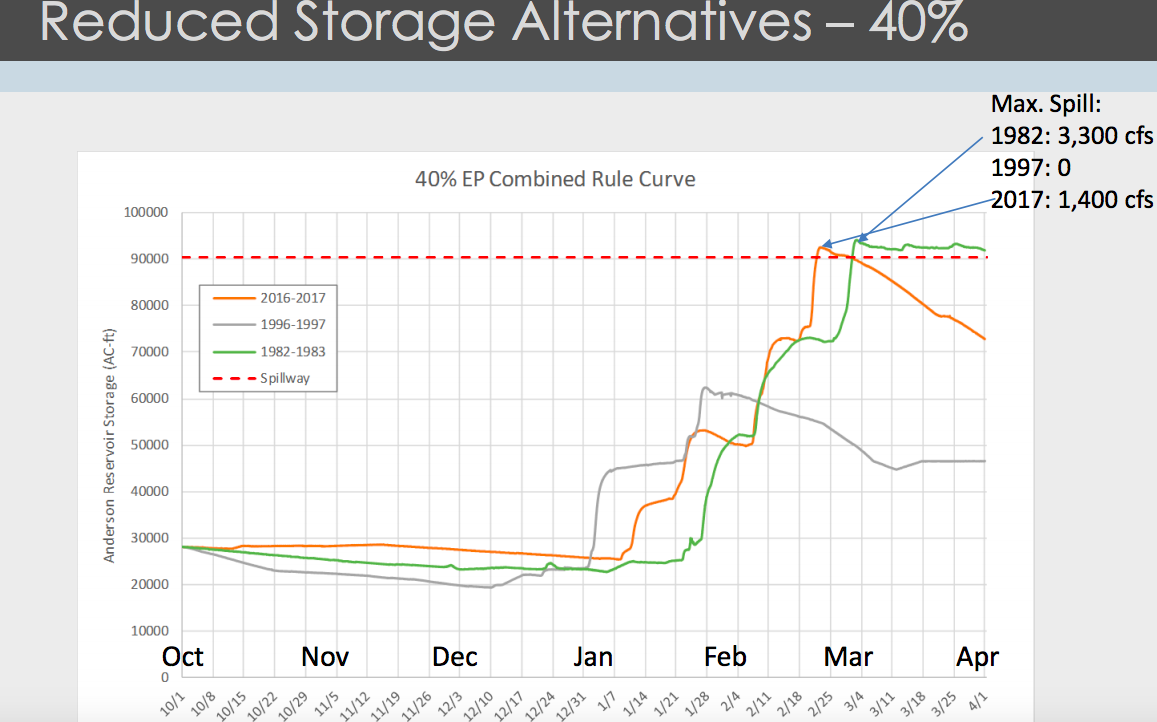 Meanwhile, the district has been working with San Jose on a number of other flood prevention measures. The city recently gave the district the green light to clear trees and vegetation from flood-prone parts of Coyote Creek between Old Oakland and Tully roads.

Further, to prevent the kind of miscommunication that resulted in delayed evacuation orders this past winter, the city and district drummed up a joint emergency plan to respond to future flooding.

When the waters hit this past February, the city failed to issue emergency alerts in time for people in Rock Springs to evacuate. Many residents found out about the flood when rescue crews showed up on a boat at their door. City officials said they didn’t alert the public in time because the water district gave them flawed data about the levels at which the river would spill its banks.

Mayor Sam Liccardo earmarked additional funding in the 2017-18 budget for the city’s Office of Emergency Management, which has undergone dramatic leadership changes in the past year. After bringing the division from the purview of the Fire Department to the City Manager’s Office, city leaders appointed Ray Riordan as its new director. Riordan, who is traveling this week, was not immediately available for comment.

David Sykes, who oversaw the city’s emergency operations during the last flood, has since been promoted to city manager, while Rosario Neaves replaced David Vossbrink as named communications director.

Hate said there’s a glaring omission in the city’s emergency preparedness overhaul, however. Despite plenty of public interest, City Hall has yet to revive its volunteer Community Emergency Response Training (CERT), a program that equips civilians with the skills to deal with a wide range of disasters.

“I’d like to see more civic involvement,” Hare said. “The city has tried to get the CERT thing going, and that has not happened. They have these giant loudspeakers that can blast out warnings in three languages, but they haven’t figured out how to engage the community in a way that I think is going to be necessary when disaster strikes.”