They call it the War Room. A cramped burgundy-walled nook tucked to one side of the All-American Cannabis Club. Stacks of signed petitions clutter the tabletops, waiting to be tallied. On one wall hangs a map of San Jose with tacks stuck on sites of some of the busiest medical marijuana clubs. Their membership lists are a goldmine for phone bankers. Virtually all day, every day for the past few weeks, volunteers have filed into the narrow alcove to rally opposition against a city ordinance going into effect July 18.

They say it threatens to close more than 70 collectives in an instant.

“The city wants to shut us down,” says Susan L., 55, a patient advocate who declined to share her last name, she explains, because of the bias against cannabis. “We can’t let them do that.” 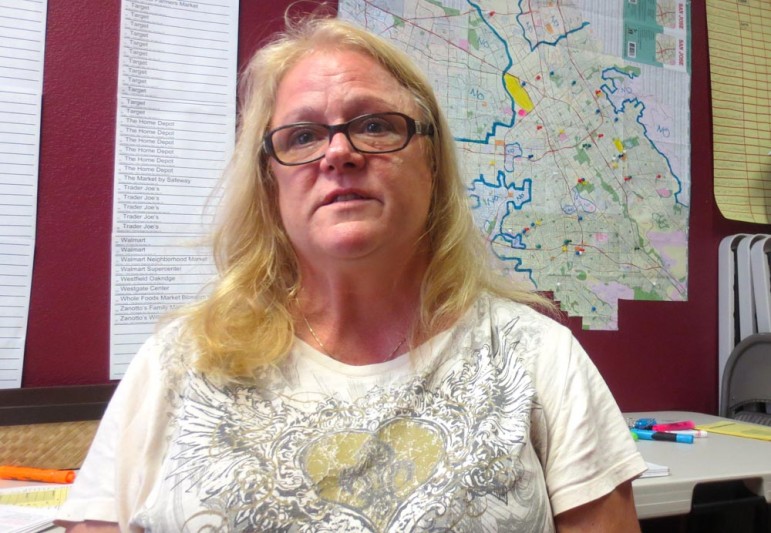 Susan L. (last name withheld) lost a brother to lung cancer five years ago. He relied on cannabis to ease the pain of chemotherapy. Now she's a patient advocate and has been volunteering her time counting signatures at All-American Cannabis Club in north San Jose.

The Campbell resident has been logging 12-hour days in the north San Jose collective, numbering autographs and recruiting volunteers to collect more for a pair of petitions to overturn some of those regulations. The effort led by the Silicon Valley Cannabis Coalition needs 100,000 signatures by next week—a longshot.

“We believe in regulations,” says Susan, whose brother relied on cannabis to ease the pain of chemotherapy before he died of cancer five years ago. “We need strong, fair, defensible and compassionate regulations. San Jose seems to have forgotten the ‘fair and compassionate’ part.”

While opponents like Susan call the rules—passed in a 7-3 vote by the City Council last month—an effective ban, the city says it has allowed plenty of leeway for law-abiding clubs.

“We want to allow for medical marijuana, but we don’t want kids to have access and we want safe neighborhoods,” Mayor Chuck Reed tells San Jose Inside. “We’ll have enforcement now, so the ones who want to stay in business will find a way [and do] whatever’s necessary. It should be easier to comply than not to comply. We want to reward people who follow the law.”

And fight those who oppose it.

Reed says he will raise money and wage a war of his own if challengers muster up enough signatures for a referendum. It’s a novel approach—placing an already-codified ordinance on the November ballot to cement it with a vote from the public. The step would protect the rules from changes by future city councils, Reed says. And, more importantly, prove that voters agree with his brand of regulation.

“I have no doubt that the people of San Jose will support what the council has done,” Reed says. “We have a strong and effective system in place.” 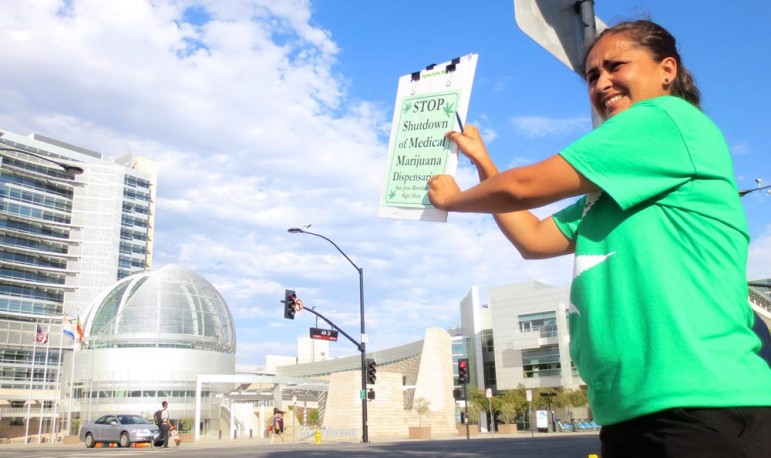 Anita Inocencio, whose mom relied on edibles to ease the pain during chemotherapy for lung cancer, stands across from City Hall trying to drum up signatures for a referendum.

That system limits collectives to certain industrial zones, or about 1 percent of the city. It demands all pot be grown in Santa Clara Valley or contiguous counties and requires all edibles and concentrated cannabis products to be made on site. It sets distance requirements of 1,000 feet from schools, 150 feet from homes and 50 feet from each other. All clubs will need 24-hour security, despite business hours being limited from 9am to 9pm.

“Honestly, it’s a de facto ban,” says Sean Donahoe, of the California Cannabis Industry Association, citing an oft-repeated refrain from the industry. “Whether the club is a good or bad actor, the requirements are unworkable.”

The battle highlights the broader quandary facing the state, which legalized cannabis for medical use but has yet to come up with adequate legislation to govern the industry. In the absence of state law, local agencies have taken the lead—some to the hilt, like every other city in Silicon Valley that enacted a full-on ban, emboldened by a 2013 state Supreme Court decision that reinforces municipal zoning rules. Now the county is on track to pass a ban and a state bill making its way through the Assembly would reinforce local law.

Few people seem to know how the San Jose ordinance will play out—not even the city officials in charge of enforcement. No permit fees have been set, though they’re expected any day now, and there’s no clear direction about how or when to involve police if a club remains non-compliant.

The ordinance says that all unpermitted clubs must cease operations by July 18. All-American Cannabis Club owner Dave Hodges takes that to mean that no collectives will have their permit approved that day, meaning every club in the city will have to halt business or risk staying open illegally while their application pends.

When the council came up with regulations in 2012, a referendum canceled the entire ordinance. “A mistake,” Hodges says in hindsight. The current referendum seeks to renege only select parts deemed unworkable by industry groups. If it’s upheld, Hodges says, the new municipal code spells the end for his career in the industry.

“Personally, I’m going to be shutting down if we’re unable to be successful with this referendum,” he says. “Other clubs may try to fight through the legal system, but I’ve been through that and it cost me over two years of stress and $100,000. And that was in a situation that was a lot less clear than we’re seeing right now. Now, it’s pretty clear that the city can shut us down.”

Starting July 18, the city will accept applications from collectives to come up to code. They will be considered on a case-by-case basis. If a club submits an application with an address outside of acceptable zoning, it gets denied. But collectives will have the option of relocating within a 90-day window to come into compliance.

Angelique Gaeta, an assistant city manager, is working on a FAQ page to post online, with links to applications through both the city manager’s office, which governs how a club is run, and the planning department, which governs where a club may set up shop. The city promises a grace period before it sics the cops on anyone. But it’s not expected to be as complacent as it has been with code enforcement to date, and city officials have taken umbrage to the “de facto ban” claim.

“Considering they’re all operating illegally now (by federal law) and we allow them to exist, I’d say that’s not accurate,” Reed says. “We’re talking about hundreds of potential locations.”

James Anthony, a cannabis lobbyist, calls that estimate disingenuous. “That’s clearly not enough for a city as big as San Jose,” he says. “The demand is there. Closing all those collectives will only push it back to the black market.”

Monday evening, a couple miles away from the War Room, William Refuerzo III, 63, mans a table kitty-corner from City Hall. He’s been at the intersection since sunrise wearing a green pot-leaf shirt and a camo hat, camped out in his dinged-up wheelchair, collecting signatures and telling passers-by how cannabis gave him better range of motion after a motorcycle wipe-out on Mt. Hamilton crippled his legs.

“I can still barely walk, but at least I can stand,” Refuerzo says, hoisting himself up to prove it. “Doctors said I wasn’t even supposed to do that.”

A cannabis club patient for the past dozen years, he takes issue with the new rules for many of the same reasons as his fellow signature-gatherers—the limits on location and across-the-board changes to cultivation and production. But he also calls the ordinance an invasion of privacy because it asks dispensaries to hand over patients’ names to the city.

“Listen, a lot of us have a personal reason to be out here, asking for support,” Refuerzo says. “That’s one of mine. But I’m here for all those other reasons people bring to the table. I ask people, ‘Where will you get your medicine if your club shuts down?’ They tell me, ‘It’s back to the streets, brother.’"