San Jose Police Chief Anthony Mata on Tuesday released a video of an altercation that led to an officer shooting a man police said had a gun at a downtown restaurant early Sunday.

Police on Monday evening had also released still images of the scuffle from the video and a still image from an officer's body-worn camera that shows the man who was shot holding a gun, recorded moments before the shooting.

The video that Mata released at a news conference on Tuesday was captured from surveillance cameras inside La Victoria Taqueria on East San Carlos Street shortly after 3am and shows two groups of men involved in a fight.

One of the men had a gun that exchanged possession between combatants at least twice during the melee. Mata said the fight then moved outside the restaurant.

Police were already nearby, he said, having responded to an unrelated shooting at 2:44am just one block away at South Fourth and East San Carlos streets that left one man dead with a suspect still at large.

Mata said officers saw the group flee the restaurant and saw one man with a handgun pointed at other people. He said officers repeatedly asked the man to drop the gun before one officer fired shots that hit the man, who was taken to a local hospital with non-lethal injuries. 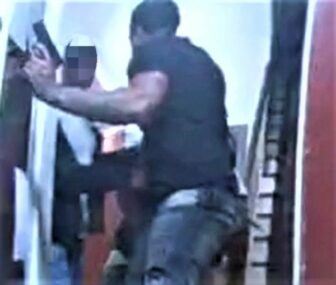 The shooting victim was not the man who brought the gun into the restaurant, Mata said. The gun owner was arrested on suspicion of being a felon in possession of a firearm.

The gun is a ghost gun, so-called because it is hand-made and has no serial numbers, making it difficult to trace to potential crimes.

Mata said there is video footage from cameras worn by officers at the scene that shows the actual shooting but did not release it Tuesday.

Mata said the video from body-worn cameras will be released at a later date.

Police did not release the names of anyone arrested nor the name of the man shot.

Mata said the name of the officer involved in the shooting will be released some time later. He said the officer has been with the department for four years and has been placed on administrative leave, which is standard procedure in such incidents.

A joint investigation of the incident is underway involving the police department and the Santa Clara County District Attorney's Office, Mata said. 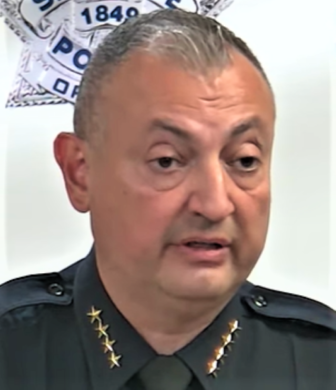