When the San Jose Earthquakes left for Orlando on June 24 to start training for the restart of the Major League Soccer season, it wasn’t a foregone conclusion they would ever take the field for a meaningful match due to the unpredictable nature of the coronavirus pandemic.

And while that’s still the case—a flurry of positive tests would either delay or likely force a team to go home altogether—the Quakes are closer to live game competition than at any point since COVID-19 suspended the season in mid-March. The Quakes play the Seattle Sounders FC in a Group B stage game in the MLS is Back Tournament at 6pm Friday.

“I think as a team we’re in pretty good shape,” Quakes forward Danny Hoesen said. “Everyone did their job, everyone took care of themselves.”

San Jose played just two games before the season was suspended on March 12. The 6-foot-1, 182-pound Hoesen started both of those contests at left wing, but has made it known he prefers playing the striker position.

“I’ve never made it a secret I believe I’m a nine [soccer position number for striker],” Hoesen said. “I want to play there, but Matias [Almeyda] is the coach and he believes I can play multiple positions. I still prefer the No. 9 spot, but if Matias chooses someone else, I have to adjust my game and do the best I can.”

Making adjustments has always been a key factor in a team’s success, and nowhere is that more apparent in the coronavirus era.

From the moment MLS announced the restart to the season, teams have had to adjust on the fly. The San Jose players worked out on their own and were not able to train together as a team until the day after they arrived at the ESPN Wide World of Sports Complex.

Hoesen, a 29-year-old from Netherlands who was San Jose’s Most Valuable Player in 2018 after scoring a team-high 12 goals, expressed pride in the team for how it has handled an unprecedented situation.

“No one is complaining, everyone stays positive,” he said. “The way people are handling it has been fantastic. We are closer than ever.”

The Quakes have their own floor in the hotel they’re staying at, and outside of a trip to the gym, testing center or meal room, they don’t congregate with other teams.

“It’s absolutely forbidden to hang out with other teams or be on their floor or whatever,” Hoesen said. “Everyone has friends on other teams, but we’re all very careful with the six feet of distance. You say ‘Hi, how’s it going,’ and then you just continue [on]. I’m proud of the way the team is handling it and following the rules. … Matias said it was important to play well in this tournament, but it was more important to stay healthy and to not put yourself at risk or put your teammates at risk.” 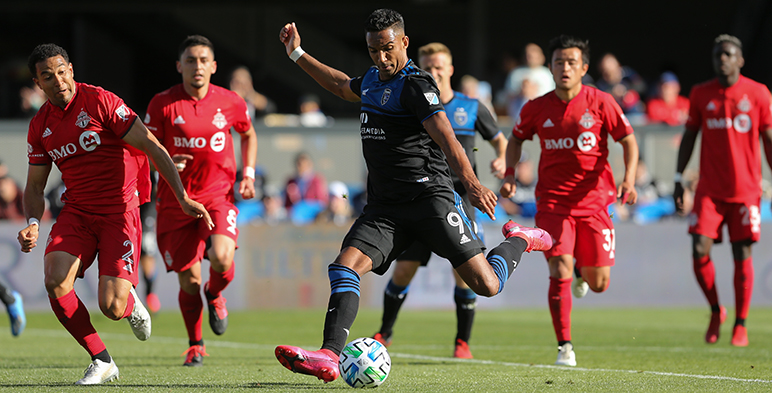 Danny Hoesen of the San Jose Earthquakes during a Feb. 29  game against Toronto FC. (Courtesy of ISI Photos)