As part of a sweeping transformation in California’s energy market, Silicon Valley cities are forming locally controlled agencies that offer ratepayers a higher mix of renewable energy at a slightly lower cost. 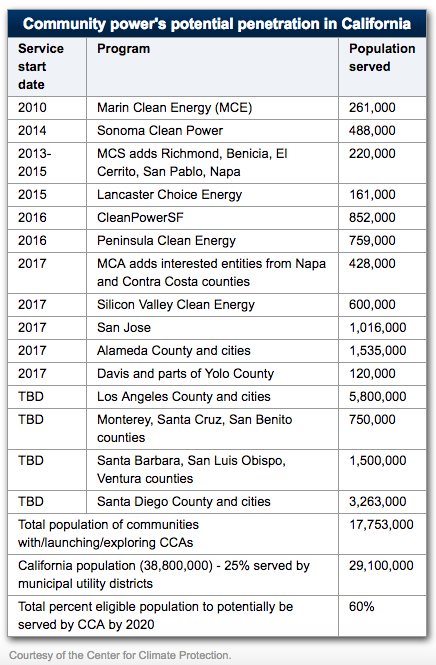 According to the proposal being considered, San Jose would offer two pricing tiers, a default rate anywhere from 35 percent to half renewables or up to 100 percent for a premium.

Several other Bay Area cities have already adopted a similar program, setting a trend for the rest of the state. Residents from 12 local communities have signed on to Silicon Valley Clean Energy, the nonprofit tasked with running the energy agency.

As of this month, there are five operational community choice programs in California with another seven poised to launch this year. Within five years, says Kerrie Romanow, the city’s director of Environmental Services, about half the state’s power load could be served by these new local agencies.

A little more than a year ago, San Jose’s council directed city staff to put out a call for bids to develop, finance, launch and run a community choice program, tentatively titled San Jose Clean Energy.

Instead of signing on with other jurisdictions, the city will consider forming its own community choice entity, with plans to get off the ground in spring of 2018. PG&E would continue to deliver energy, but the city would decide which power plants to buy from.

PG&E customers would automatically get enrolled in the new energy program unless they opt out, Romanow says. The city would not only choose which sources and ratios of renewables to buy, but it would also set slightly lower rates. PG&E would keep charging the same rates for delivery.

Mary Collins, head of the local chapter of the League of Women Voters, urged the city to include more specifics in its community choice plan about how it would add more green power to the grid. In a letter to the council, the league asked city officials to specify how it would offer discounted rates to lower-income households. The letter also stressed the importance of telling people about the program ahead of time so they aren’t caught off guard when they’re automatically enrolled.

The council expects to vote on whether to pursue the community choice aggregation model in late April.