A San Jose City Council candidate has denounced a political action committee’s attacks on her opponent as “horrible” and “seriously off track” with her own commitment to run a positive campaign.

“Over the course of a week or so, four attack ad mailers were received in the mailboxes of District 9 voters,” Foley said from a podium outside City Hall flanked by business-friendly council allies Dev Davis, Chappie Jones and Mayor Sam Liccardo. “Frankly, I hope that’s the end of it. Two were bad enough—but four? That is ridiculous and extremely disappointing.”

Though Foley said she’s honored to be endorsed by the SVO PAC, she stressed that she had nothing to do with the ads and that state election laws prohibit candidates from coordinating with independent committees.

“I have not had, nor could I legally have had, any involvement with anyone at the SVO regarding these mailers,” she said. “It would have been a violation of campaign law.”

The mailers authorized by the SVO’s independent expenditure committee use half-truths to accuse Gallagher of misspending taxpayer money, breaking tax law and carpetbagging. The most alarming one features a touched-up photo that makes it look like Gallagher’s flipping off the camera. In the original image pulled from his Instagram account, he’s pointing to an “I voted” sticker on his chest. In the photoshopped version, the sticker’s gone and the image is cropped to make his forefinger look like a middle finger. 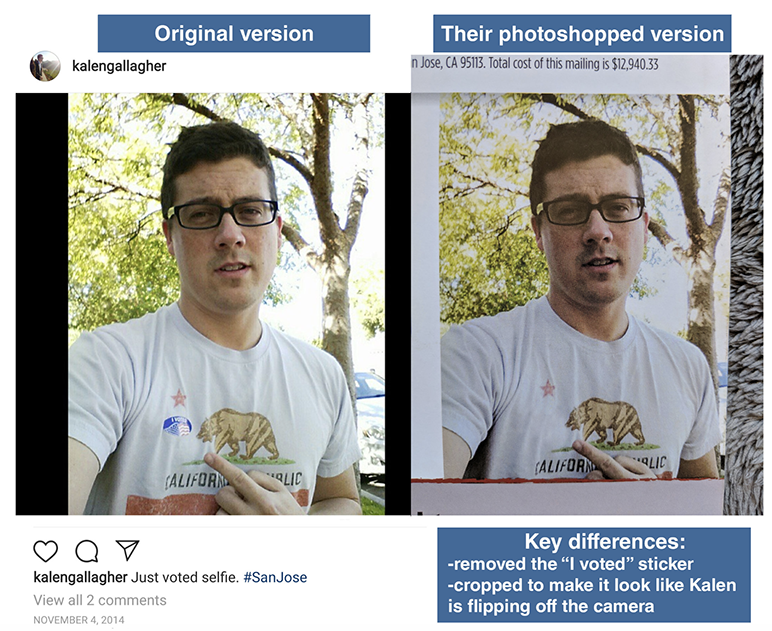 Gallagher posted a point-by-point takedown of the hit pieces on his campaign website, which you can read here. The Campbell Union High School District trustee who advanced to the runoff without institutional support from labor groups or the business community took the opportunity to tout his independence and condemn the tactics of special interest groups like the SVO.

“In the primary election, these special interest groups spent over $225,0000 for our opponent,” he wrote. “They are planning on spending another $400,000 in the general election. They are truly frightened that we are going to win despite refusing to sign their loyalty application or accepting their money. Because of this, they are hoping that they can make up things about me and our campaign and that voters won’t see through it.”

How dishonest are the $50,000 worth of attack ads sent against us so far? This photo is a good example.

Have questions about the other attacks? Get the facts at https://t.co/N4zSb3nXtA

Don't let them trick you! pic.twitter.com/C1OkzndpMg

San Jose attorney Chris Schumb, who was quoted on one of the SVO PAC mailers as calling Gallagher “incompetent” and “corrupt,” said he was appalled that his words were taken completely out of context.

“I wasn’t even talking about Kalen,” said Schumb, who asked the SVO committee for a retraction. “He’s a nice guy. He’s one of the last guys I would ever say something about like that. I happen to be a Pam supporter, but I’m very upset that my name was used to say such nasty things about a guy who’s a highly effective board member and a highly ethical person.”

At Monday’s presser, Foley said she understands Gallagher’s frustration, which is why she felt compelled to issue a public statement condemning the ads. During the primary, San Jose’s police union targeted Foley with misleading claims that she believes cost her hundreds of votes.

“I didn’t like being the victim of two such attacks in the primary and I don’t like them being used against my opponent,” she said. “They are appalling and a strategy that I do not support. I wish they would stop.”

Mayor Liccardo, who’s backing Foley in the D9 race and has enjoyed support from the SVO in every one of his campaigns, commended her for taking a stand.

“We recognize that maybe the modus operandi for national politics and maybe in other cities, but it has no place here in San Jose,” he said. “I’m grateful that Pam Foley has the integrity to stand up and say, ‘Not in my campaign.’ Obviously, voters need to know that she has nothing to do with these kinds of attack ads.”

SVO officials, who declined to answer questions about who authorized the mailers, dismissed the criticism and defended the ads.

“Kalen Gallagher's past history in office is fair game and an indication of what he will do in the future,” SVO Director of Government and Community Relations Eddie Truong said in an emailed statement. “All of the information shared about Gallagher’s record is true. He has tried to explain them, but has never shown any of them to be untrue. He can complain about a picture, but this is really just a distraction from the fact that he has a terrible record of public service.”

This article has been updated to include statements from the SVO spokesman Eddie Truong and attorney Chris Schumb.