Bill Clinton made some diva demands as a six-figure speaker when he left the White House for the lecture circuit, according to newly unearthed records.

For a speaking engagement with Cupertino’s Foothill-De Anza Community College District in 2002, the ex-president refused the going rate of $60,000 per event for world leaders such as Ronald Reagan and Jimmy Carter. After some back-and-forth, he agreed to at least $100,000 a speech for six events, the Los Angeles Times' Evan Halper reported.

Clinton insisted that same year on taking the 70-mile trek from San Francisco to the Mondavi Center at UC Davis by private jet, forcing the college to find a last-minute donor to cover the expense. He also racked up a $1,400 hotel phone bill and a $700 dinner tab, which his handlers at the Harry Walker Agency called “reasonable expenses.”

Another proviso involved screening questions to avoid mention of political and personal scandals. An organizer of one Bay Area speaker series called the suggested queries “terrible, and terribly general.” Here’s a look at some: 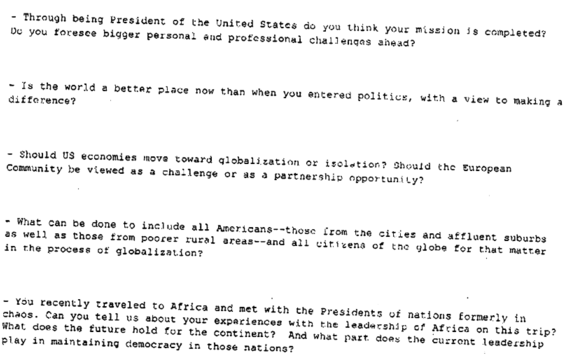 The Republican National Committee obtained the records through a series of Freedom of Information Act requests to gear up for a general election fight against Hillary Clinton.

By their own count, the Clintons have raked in more than $150 million from private speaking engagements since they left the White House in 2001. Bill has made up to $750,000 for a corporate event. Their exorbitant fees and inordinate demands changed the political speech-for-cash game, Times columnist Christina Bellantoni noted in a Sunday political roundup.

In the decade since, the Clintons’ six-figure demands have become standard. Hillary’s honorarium has topped $200,000. And her refusal to release transcripts from corporate events—including three speeches Goldman Sachs paid $675,000 to hear—has become a matter of political contention.