Watch San Jose Inside for updates.

The USGS said the quake was felt as far north as wine country and Sacramento and as far south as Salinas and Big Sur, into the ocean past Santa Cruz and east of Merced and Modesto.

There were no immediate reports of damage or injuries from the quake, which occurred along the Calaveras Fault in hills about 8 miles east of downtown San Jose at a depth of 6 kilometers.

The USGS reported six aftershocks from the quake tremor, from a 1.6-magnitude an hour after the quake,  to a 3.6 magnitude shake that occurred at 3:08pm. The service reported that more than a dozen aftershocks could be expected. 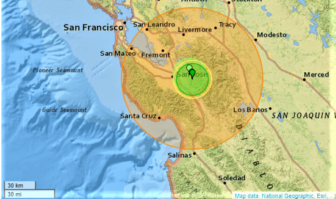 The quake occurred less than eight days after the anniversary of the destructive 1989 quake, centered in the Santa Cruz Mountains southwest of San Jose.

Bay City News reported that the 5.1 quake was the largest in the Bay Area since a 6.0 earthquake in the Napa area in 2014. It was the largest quake on the northern end of the central segment of the Calaveras Fault since a 5.4-magnitude quake in 2007.

Many people also received advanced notification seconds before the quake happened via the MyShake smartphone app developed at the University of California at Berkeley, according to the Governor's Office of Emergency Services.

Cal OES received data that close to 100,000 individuals received advance notifications before shaking started through the state’s earthquake early warning system. Advance notice varied from two seconds for those very near the epicenter to 18 seconds for those in San Francisco.

Bay City News reported that BART officials held trains so crews could inspect trackways for possible damage, but cleared all service for normal operations by about 12:20pm. Santa Clara Valley Transportation Authority light-rail service was also delayed for inspections following the quake but was back on schedule by 2:30pm.

The USGS reported receiving nearly 22,000 reports of the quake and its aftershocks in the first three hours after the initial tremor.