When her son—a 24-year-old with an incurable lung disease—came down with a fever, fatigue and body aches, Rebekah Davis-Matthews wasted no time in scheduling a Covid-19 test. Cystic fibrosis made Ricky Whicker, her oldest son, particularly vulnerable to the pulmonary ravages of the coronavirus, so she wasn’t about to take any chances.

On July 23, a doctor at the Indian Health Center of Santa Clara Valley authorized the diagnostic assay, saying results would take about a week to process. The following day, Davis-Matthews took her son in for the test. Then, they waited.

Seven days passed with no word. Then 10.

When Davis-Matthews called the clinic to find out what’s the holdup, they told her the results might take up to another week—18 days from specimen collection.

“In this day and age, it should not take 10, 12, 15 or 18 days for a symptomatic young person with a fatal lung disease to get test results,” says Davis-Matthews, who works as a contact tracer for the Santa Clara County Public Health Department. “It’s unacceptable because it renders the test useless.”

Throughout the U.S., people are lining up for Covid-19 tests only to wait a week or more to see the results. With the nation hammered by the worst pandemic in a century, public health experts are frustrated by worsening test delays, which put patients on edge and undermine efforts to contain the virus.

“As a contact tracer, I advise people to quarantine for 10 days after a test,” Davis-Matthews says. “But with results taking so long, you might as well not get tested at all.”

That’s because if infected people don’t isolate in a timely manner, she explained, it’s almost impossible to retrace their steps to find out who else they exposed. Experts say the nation’s overall inability to test efficiently is part of what’s fueling the recent record-breaking surge in infection rates.

At a press conference on Wednesday, Santa Clara County Public Health Officer Dr. Sara Cody— Davis-Matthews’ boss—lamented the delays, saying they make her job that much harder. “A turnaround time of a week or more doesn’t really help,” she said, “and our ability to make a difference with contact tracing evaporates.”

Nationwide, turnaround times have just about doubled in the past few weeks, according to public health experts, with some of the biggest backlogs besetting CVS and other retail outlets that rely on bulk testing by centralized labs.

On Twitter, former CDC chief Dr. Thomas Frieden said the test numbers are meaningless when “results are very delayed and of little utility.” “They charge, but the public doesn’t benefit,” he added. “Tests performed per day is a very misleading indicator.”

The delays come as the county grapples with a lack of data after a computer glitch reportedly caused the state to lose track of the true number of Covid-19 cases.

According to Cody, the numbers have been off for about a month, leaving her “feeling blind.” “We don’t know if our cases are rising, plateauing or decreasing,” she said.

Both the lapse in reporting and the diagnostic delays lie beyond the county’s control, Dr. Cody added, although she has offered to help the state address data issue. Getting labs to produce more timely results is a much bigger challenge.

WATCH LIVE: Santa Clara County Health Officer Dr. Sara Cody is holding a press conference to give an update on the region's response to the coronavirus. https://abc7ne.ws/2Xvm0qW

According to the Covid Tracking Project, the U.S. is testing about 755,000 people a day—a significant jump from the 640,000 daily average recorded last month. But a new national survey shows that soaring demand, resurgent infections and supply-chain shortages have many Americans awaiting results for far longer than the 24-to-48-hour ideal advised by public health experts.

Of the 19,000 people polled for the study by Harvard, Northeastern, Northwestern and Rutgers universities, nearly a fifth reported impractically long wait times for Covid-19 rest results. About 10 percent said it took 10 days or more to receive a diagnosis.

In the Harvard-led study, researchers explain that testing—especially for asymptomatic people—is critical for controlling the spread of Covid-19. When done quickly, it can reduce reliance on more draconian interventions such as shelter-in-place orders.

“For certain contagious diseases like many sexually transmitted diseases, a wait of a week would likely not be consequential—because the infected individual is unlikely to infect many more people in that time,” the study’s authors explain in summary of their findings. “However, for Covid-19, peak asymptomatic contagiousness for many people may only be a week, which means that a week-long delay would render a positive test nearly useless to prevent further transmission. As such, the turnaround time for Covid-19 test results can have a major impact on efforts to control the spread of the virus.”

The cause of delayed results vary from one lab to another and range from supply shortages to overwhelming demand.

Large corporations handle roughly half of all coronavirus tests in the U.S., with LabCorps and Quest Diagnostics competing in a global market for supplies such as swabs and chemicals needed to detect Covid-19. In a press release this week, Quest claims average turnaround times of five days overall and two for high-priority patients.

“In recent days, demand for our COVID-19 molecular diagnostic testing has plateaued, albeit at a high level,” the company wrote in an Aug. 3 update. “We attribute much of the plateau in demand to our efforts to ask providers to prioritize patients so we may direct testing to those most in need. At the same time, we have recently increased capacity through several lab innovations. These include the use of specimen pooling, which is now in place at three of our laboratories, and improvements in RNA specimen extraction. We have also expanded our lab referral network to include a half dozen laboratories to facilitate greater access to COVID-19 molecular diagnostic testing.”

Quest said it recently ramped up its capacity to perform 150,000 Covid-19 tests a day and expects to push that up to 185,000 by Labor Day while shortening wait times.

Kaiser Permanente promised to speed up results soon, too, now that it has a new 7,700-square-foot lab in Berkeley to process thousands of tests a day. Currently, results for members of the health plan come through in about three to five days.

Because of bottlenecks at the overwhelmed commercial labs they rely on, privately run test sites—such as those operated in Silicon Valley by Google’s Verily—have tended to result in longer turnaround times.

The longer waits are only compounded by concerns about data privacy at sites run by corporations, said Maria Ortiz, a member of the fledgling Covid-19 Action Network, which has been agitating for more resources to help the Latino community weather a pandemic that has hit them the hardest.

For Ortiz, the city and Google choosing to put the only fixed testing hub in the predominantly Latino East Side at a police facility—the PAL Stadium—only made matters worse. “Latinos—specifically those in the East Side—are the most impacted by this virus,” she said, “and for the city to put a test site run by a corporation and hosted at a police facility in a community of immigrants was a slap in the face.”

It came as no surprise to Ortiz that the PAL Stadium was one of the poorest-performing drive-through test sites in the county, saying many immigrants in lack trust in both police and Google. Among a list of proposals by the Covid-19 Action Network is a call to open more publicly run alternatives and sites more conducive to walk-up testings.

A statement sent by the activist-led network to local electeds several weeks ago states: “This coalition of grassroots organizations makes a demand to our local government officials to be fully and really transparent in its response, take effective even if risky response, and target resources to government staff to accurately identify, and track for Corona virus outbreaks in these communities.” 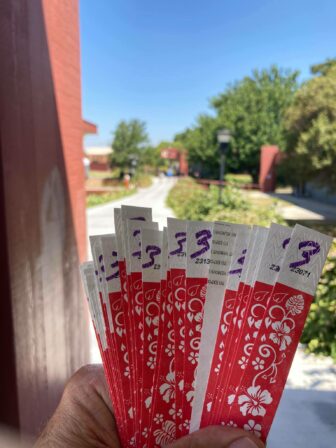 Fil Maresca has repurposed wristbands he once used for ticketed festivals as a way for people to reserve slots for Covid-19 tests. (Photo via Facebook)

Among the 50 testing sites in Santa Clara County, those operated by the local public hospital system have apparently managed to maintain turnaround times of a few-to-five days.

That might owe to the county pacing itself—putting a cap on the number of samples collected each day to avoid inundating the public lab.

Fil Maresca put on some of San Jose’s biggest festivals, from the SoFA Street Fair to the Jazz Summer Fest, until the pandemic curtailed his impresario work. In the months since he’s channeled his organizational and crowd management expertise into helping the county keep its pop-up testing site traffic in check.

One way he’s accomplished that is by repurposing the kinds of wristbands he used to authorize entry at ticketed events—before the pandemic rendered large gatherings a public health hazard.

“We start each day with 850 wristbands,” Maresca explained, “and divide them up by the hour. So, the first 850 people who show up can claim a band and then know they can come back later in the day when it’s their turn. That way, they don’t have to wait in line for hours just to get turned away. It’s a virtual line, basically.”

Maresca said the wristbands, which the county let him start using a couple weeks ago, has helped the public Valley Med lab avoid the backlogs piling up in the private sector. “Part of the reason our times haven’t increased is because we know how much we can handle in a day and we don’t do any more than that,” he said. “And if we do turn people away, we just tell them to come back the next morning.”

More often than not, he said, people oblige.

Despite their limited capacity, the county pop-up sites have been embraced by the community for their ease of access and reliable turnaround times, Maresca said. That they’re hosted at neighborhood schools, rotate locations from week to week and collect minimal data on patients make them all the more popular.

“This week we’re at San Antonio Elementary, and we’ve been overwhelmed because a lot of people can walk here,” Maresca said. “We’re really making an effort to get into neighborhoods where people are, where they live and where their kids go to school. Basically, we go to them instead of the other way around.”

There are places to get faster test results, but none are as accessible to the predominantly immigrant neighborhoods with the most Covid infections and deaths.

By far, patients see the speediest turnarounds from research and university labs, such as the one at Stanford, where results can come back in just hours. That’s where Davis-Matthews is taking her son for diagnosis today.