Residents met with developers Monday as part of an ongoing series of design workshops to discuss a 50-story highrise that would add 6,000 new residential units by Santa Clara’s Levi’s Stadium and enough open space to rival the city’s flagship 52-acre park.

Chinese developer Kylli Inc. in 2019 is two meetings into its second year of community outreach for the proposed 10.5-million mixed-use project, which is set to occupy 46 acres at Tasman Drive and Great America Parkway on the former Yahoo! campus. A third is scheduled for later this month.

“We have this great vision about how we can make these spaces be active,” Kylli-hired spokesman Adam Alberti, of Singer and Associates, said in an interview earlier this week. “Jobs, office space, local job growth, retail and open space.”

According to the Kylli’s zoning application, the mega-development will create almost 15,000 new jobs, a new public elementary school, miles of walking trails and 8 acres of public open space. The open space, which spans the size of about six football fields, was the main focus of the public meeting Monday evening.

“Our open space network will help establish a unique identity for the project and provide gathering places for residents, neighbors, workers, shoppers and visitors,” Randi Gerson, vice president of real estate development for Kylli, said in an announcement of the forum.

The project’s site plan includes public spaces for a range of activities, he said, including a grassy field next to the proposed elementary school for both students and the public.

While the public park components of the Kylli project will come up for further discussion at future hearings and town halls, the thorniest part of the mixed-use proposal is it’s height. At 50 or so stories, it would be the tallest building for miles around.

Also cause for contention: the inevitable increase in traffic, which—combined with its close proximity to Levi’s Stadium—could lead to more headaches for commuters.

“There are concerns about height and [population] density,” Alberti conceded. “We’re hoping we can address those concerns at [future meetings].”

If all goes according to plan, Kylli plans to wrap up environmental review in time to begin construction in the latter half of 2020. “It’s still early,” Alberti told San Jose Inside. “We’re planning to have more workshops ... in the future. We want to build a complete neighborhood, one with an overall community atmosphere.” 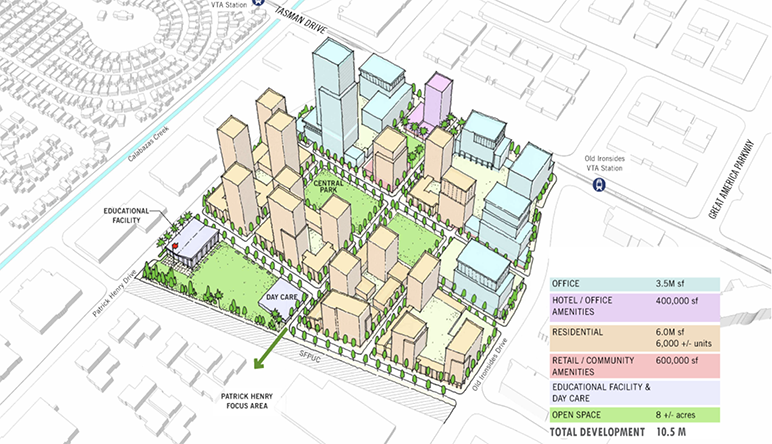 A massing image of the project. (Rendering via Kylli/City of Santa Clara)