Mohini Jadhaw worked as a nurse in Regional Medical Center’s labor and delivery ward when the young woman arrived at the emergency department by ambulance.

An employee at a fast food joint across the street from the hospital, the woman had complained of chest pain before suddenly collapsing that day in 2017 and remained unresponsive when the ambulance arrived. Because the patient was 32 weeks pregnant, Jadhaw was summoned to assay the health of the fetus. After placing a fetal heart monitor and palpating the woman’s womb, Jadhaw knew something was very wrong.

“The uterus was so hard, like a rock,” Jadhaw said. “The fetus was having variables. I told somebody to get the OR team ready.”

Jadhaw watched as the young woman underwent an emergency caesarean section. The nurse said what she witnessed in the operating room traumatized her. “This woman almost lost her uterus,” Jadhaw recalled.

What she had witnessed was a placental abruption, a separation of the placenta from the uterine wall that caused the young woman to bleed internally. The woman also developed an inability to clot due to the massive blood loss. After six transfusions and a procedure to stop the bleeding, the patient was sent to the ICU, where she remained for eight days.

Though the event haunts her to this day, Jadhaw is glad she was there to offer prompt care to a mother and baby who suffered a rare and potentially fatal complication.

“They lived because we intervened within 10 minutes of arrival,” she said.

Jadhaw is one of the many nurses who rallied Friday outside the San Jose Regional Medical Center to protest the parent company HCA Healthcare’s planned closure of the hospital’s labor and delivery unit.

Though the labor and delivery ward will close, the hospital, which did not immediately respond to a request for comment, will retain a trauma center. Mothers in distress or labor who enter the emergency room will be transferred to hospitals with maternity units, the closest being Valley Medical Center eight miles away.

Because the trauma center will offer no fetal monitoring and retain no labor and delivery nurses trained in the practice, Jadhaw and other nurses say the hospital will be in violation of the law. Namely, the Emergency Medical Treatment and Labor Act of 1986, or EMTALA, which is also referred to as “the anti-dumping act.” 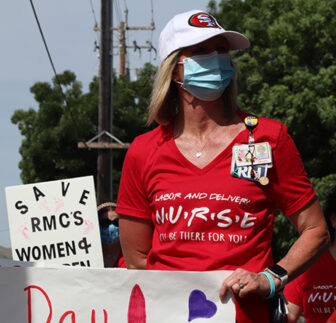 Nurses joined parents at the May 8 demonstration to decry HCA's decision to close the birth ward. (Photo by Amani Hamed)

The veteran nurse said that outside of scheduled births, the labor and delivery unit has, on average, between five and 18 encounters with the emergency department in a 24 hour period. According to the EMTALA, pregnant patients and their fetuses must be monitored and stabilized before they can then be transferred to a facility that can offer the appropriate level of care.

Without fetal monitoring, Jadhaw is concerned that emergency department physicians will be sending patients off to hospitals that can take 45 minutes to reach in Bay Area traffic without knowing the status of the fetus. “You could be sending a dead baby or a mom that is bleeding inside the abdomen,” she said. “How can you send a patient off if you don’t have fetal status?”

“Without having an OB doctor or an OB nurse in-house, and if it takes 30 minutes to be able to evaluate the mom, you could have a dead baby by then,” she said.

Julie Wei, another labor and delivery nurse at Regional Medical Center for 29 years, uses the axioms “decision to incision” and “time is brain” to explain the urgency of using an emergency C-section to save mother or baby. “Decision to incision time should be 30 minutes or less, hopefully less,” Wei said. “If it is a true urgent condition, time is brain; if the oxygen pathway is disrupted in some way, the baby’s not getting oxygen. If you’re not getting oxygen, you’re going to lose brain cells.”

This type of oxygen depletion can cause lasting cognitive and motor damage, as well as conditions such as cerebral palsy.

Wei contends that if Regional Medical Center is unable to properly offer maternal and fetal care, the hospital should not continue to operate a trauma center.

“If you’re going to have a trauma center that treats everyone, you have to have every service,” she said. “Maternal deaths happen every day, and the majority of the deaths are because they are not treated right.” 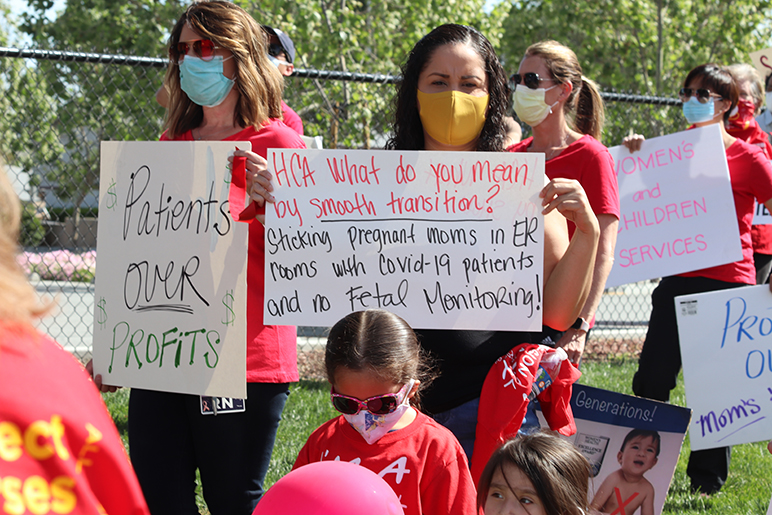 The hospital plans to close the birth unit by the month's end. (Photo by Amani Hamed)

The Joint Commission that evaluates healthcare organizations is set to include conditions like preeclampsia and maternal hemorrhage in its elements of performance standards in July of 2020, ensuring that incidents of preeclampsia and maternal hemorrhage would be monitored and recorded. This is due in part to America’s ranking 65th among industrialized nations for its high maternal death rate.

Jadhaw stressed that monitoring maternal and fetal deaths due to these complications is not enough, and said she and other Regional Medical Center labor and delivery staff are trying to prevent these fatalities.

Jadhaw also remarked on the timing of HCA’s closure of the ward.

“They are doing this under the COVID-19 radar,” said Jadhaw.

The decision to close the maternity ward was announced April 1. The ward’s last planned day of operation will be May 30.

Otto Lee, a candidate for Santa Clara County supervisor in the district where Regional Medical Center is located, joined the rally in a show of solidarity. “This is actually the worst time to think about reducing services for our local community, especially those who are most vulnerable,” he said. “A lot of minority communities and a lot of folks living on the East Side, that’s the main hospital they go to to seek medical help.”

Among fears that women will not have access to proper emergency labor and delivery care, Jadhaw and the other nurses are concerned that mothers being rerouted through emergency rooms will be put at risk of contracting COVID-19.

Jake Tonkel, who’s running for San Jose City Council in District 6, also spoke at the rally. Though the district in which he’s challenging Councilwoman Dev Davis has two maternity wards at Valley Medical Center and O’Connor Hospital, Tonkel noted that the part of San Jose where Regional Medical Center lies has no other option.

“We want to make sure we have robust infrastructure everywhere because it makes the whole community stronger,” he said. 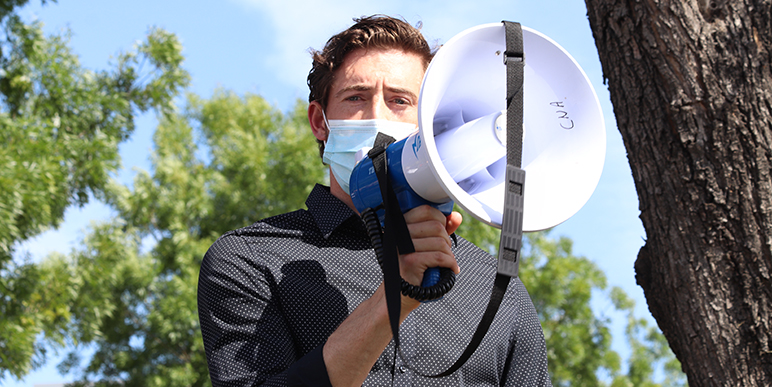 Jake Tonkel, a candidate for San Jose's D6 council seat, joined nurses at the rally, saying the birth ward's closure would deprive East Side of a vital service that could save lives. (Photo by Amani Hamed)

At 32 weeks pregnant, Gina Herrera expects to deliver her baby at Regional Medical Center in early July. The mom-to-be said her sisters delivered their babies there, and that allowed her to familiarize herself with the hospital, which lies just five minutes from her home in East San Jose. She said she learned of the maternity ward’s closure on May 7 and decided to join the sidewalk protest the day after.

“It’s just really upsetting,” she said. “Just knowing the history of everything, how it was built by the community for the community, and now it’s not serving the community.”

Regional Medical Center’s labor and delivery ward delivers an average of 800 babies per year. “Just because they live over here and they don’t have the right insurance, doesn’t mean they don’t deserve good, safe, adequate care,” Zeman said. “They shouldn’t have to live in Los Gatos to make sure their baby is safe.”

Tonkel and Lee also highlighted the disparity in wealth and resources between places like East San Jose and Los Gatos. “The intersectionality of all these systemic biases against people of color, against low-income communities, show up all over the place,” said Tonkel. “If we’re not ready to stand up for all of them, then I don’t think we’d be doing our jobs right as elected representatives of a city, of a community.”

Wei said this is purely a financial matter for HCA Healthcare. “NICU makes money, Labor and delivery, not so much,” she said. “HCA is a very profitable company.”

“They are putting profit over lives,” Zeman added.

HCA Healthcare is based in Nashville, Tennessee and has hospitals in 24 states. As a publicly traded company, its stocks consistently sell at over $100 per share. Its CEO, Samuel Hazen, has a net worth of $80 million, and earned $26.7 million in total compensation in 2019. HCA’s total revenue in 2019 was over $46.7 billion.

Zeman calls the closure “redlining healthcare,” and said the closure will turn the East Side into a “healthcare desert.”

“A baby’s not going to knock on mom’s uterus and say ‘hey I need to come out!” Zeman said. “There’s no one speaking for that baby, and that’s what we’re doing: we’re speaking up for the ones who can’t speak for themselves.”