Born to a strict religious Filipino father and blue-eyed, blonde Virginia-bred mother, Lori Kay shed the surname Mendoza in her mid-20s after establishing a new life in the Bay Area. While attending UC Santa Cruz as a art history major, she spent time studying abroad in Switzerland, where her host family introduced her to naturism and the body acceptance movement. Upon her return, she discovered Lupin, where she would meet Glyn and raise their two daughters. 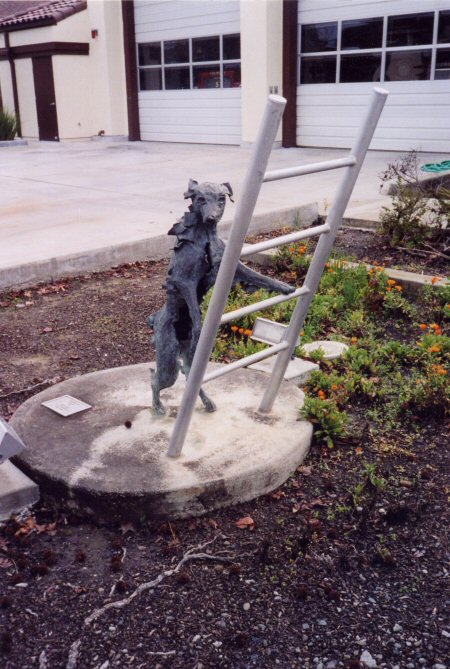 One of Lori Kay's sculptures, titled Flight IV, installed at a Fremont fire station. (Photo via City of Fremont)

“It’s an incredibly beautiful place,” she said proudly, gesturing to a sweeping view of redwood forest beyond the floor-to-ceiling windows of the Lupin restaurant.

A celebrated mixed media artist and metal sculptor, Lori Kay has exhibited and lectured both locally and abroad. Her work has been commissioned for public art projects in nearly a dozen cities. Through her art, she has explored themes of identity and a childhood marked by prejudice against her interracial parents and their mixed-race offspring.

“I needed to stop and do this,” she says in a 1995 Mercury News article about an exhibit inspired by her biracial heritage. “I couldn’t just keep going casting bronzes and doing public sculptures without questioning … who am I, and how do I bring both my backgrounds to who I am and what I create.”

There’s a stark contrast between Lori Kay’s ruminative artistic self depicted in old news clippings and the portrait painted by court records and accounts from dozens of embittered Lupinites. Tenants and members describe Glyn and Lori Kay, who live apart on the grounds, as a “good cop, bad cop” duo. Glyn is quick to commend his semi-estranged wife—the pair filed for divorce but never finalized papers—for her ability to take charge.

“I’m basically a Los Gatos soccer mom,” she said, “except there are three very unusual things about me.”

For one, she’s mother to a fifth generation of mirror-image twins. High school-aged Simone and Samara are identical but with opposite asymmetric features—one is right handed and the other left, one’s hair whorls clockwise and the other counter. Secondly, Lori Kay said, she’s a female sculptor. And, of course, she manages the longest-running naturist club west of the Mississippi.

“The oldest business in the Los Gatos chamber of commerce,” she said, adding that she intends to keep it that way.

Lori Kay dismisses allegations from former tenants as sour grapes from people who dropped their end of the contract. Lupin won those cases, she pointed out, and the people evicted have questionable reputations and legal troubles in their own right.

“We evicted them as any landlord would,” she said. “We are much more careful in the way we investigate potential tenants in an attempt to minimize the number of evictions.”

Most of Lupin’s visitors have been loyal members for more than 10 years, she said. “Our membership has supported Lupin through some tough times,” she added. “They love Lupin. Many comment that Lupin and the environment that it provides has helped them with negative body issues. The peace and tranquility of Lupin has helped people through tough times in their lives.”

Robert Bergman, a photographer who flies in from Canada every year to organize a body acceptance festival at Lupin said any facility that size will have issues, but that his experience has been positive on the whole. Delman Smith, a Los Gatos-based attorney and Lupin member for decades, agreed, calling the place “Eden-like.”

“We try our hardest to continue in our 80-year tradition in having a safe, family friendly and mutually respectful place,” she said. “We’re a community.

But even within the tight-knit naturist community, Lupin has alienated some members by blurring the line between sex and social nudity.

“Being a nudist is supposed to be a non-sexual, family friendly environment,” explains Ken Hooper, who canceled his membership in the mid-aughts over what he saw as the club’s decline. “That’s so important. Social nudity is about trust.”