In 15 violent seconds, the 1989 Loma Prieta earthquake rendered Lupin Lodge a wreck of toppled cabins and cracked foundations that took years to rebuild. Four years prior, a rare summer rain and mercurial wind-shift spared the nudist resort from a 15,000-acre arson-sparked blaze that destroyed the community water system.

But neither seismic spasms nor wildfire prepared Lupin proprietor Glyn Stout for the devastating force of Ed Dennis.

Ed moved into the clothing-optional Los Gatos enclave in 2002, a year after Glyn and his new wife, Lori Kay, had given birth to twin girls. First-time fatherhood and a second-time marriage got Glyn thinking about how to secure his family’s future by investing in the 110-acre property—California’s oldest nudist colony.

Glyn confided these hopes to Ed, a retired entrepreneur with a purported $17 million net worth and a passion for naturism. Ed—corpulent, blustery and later tabbed Terrible Ed—“portrayed himself as an unselfish paladin,” the Stouts told a judge some years later.

This ostensibly charitable newcomer promised to help Glyn and his wife achieve financial stability, double the club’s membership and spark a naturist revival. To Glyn, saddled with debt and litigation, the man sounded like a godsend. He signed over the company—but not the property—to Ed and his wife Kassandra. On a handshake, they agreed to a 99-year lease. Trusting Ed, Glyn said, became the worst mistake of his life. 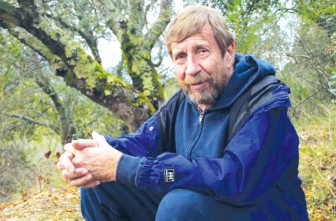 Lupin proprietors Glyn Stout (pictured) and his wife, Lori Kay, have been locked in a battle over water rights with the Midpeninsula Regional Open Space District. (Photo via Facebook)

Under Ed’s brief reign, membership fell to a 25-year low. Staffers also left in droves. The already-foundering club nearly collapsed under the weight of lawsuits, liens, collections cases, sexual harassment claims and overdue taxes. The Lupin Loop newsletter, once a bulletin for community announcements, became a platform to berate members who voiced their concern.

After learning that Ed was nothing more than “a well-experienced con-man, sociopath and misanthropist,” as the Stouts characterized him in the inevitable breach-of-contract lawsuit, it took three more years of bitter court fights before the final showdown. Ed and Kassandra would hole themselves up in their cabin or the main office for days at a time. Finally, after months of sabotage, sieges and physical bouts, sheriff’s deputies enforced the eviction and ended a bitter saga that pushed Lupin to the brink of insolvency.

Glyn seemed to never quite recover from the episode. A spinal fusion to relieve a pinched nerve, compounded by cancer and other ailments, left the longtime owner frail and spent. His wife Lori Kay, an acclaimed sculptor, assumed control in 2006. Almost a decade later, as Lupin approaches its 80th anniversary in August, the resort remains shrouded in allegations of wage theft, substandard living conditions, questionable hiring practices and retaliatory evictions.

Last month, the Santa Clara County District Attorney’s Office accused Lori Kay, 53, Glyn, 77, and two resident-staffers of surreptitiously sucking water from a nearby creek. Now with a felony case on the books, longtime members wonder whether Lupin can weather its latest legal storm.