Dara McClellan, a live-in employee since 2007, says Lupin’s husband-and-wife proprietors, Glyn and Lori Kay Stout, had her work 30 hours a week in exchange for food and lodging.

But McClellan claims she never signed a written agreement and never got overtime, meal breaks, compensation for a lack of meal breaks or reimbursement for any expenses. She further alleges that she never earned actual wages, endured legally substandard housing and that the room-and-board arrangement evened out to less than the statewide minimum wage.

The class action lawsuit filed Friday in Santa Clara County Superior Court has identified at least 35 others who worked under similar conditions. It demands a jury trial, injunctive relief, back pay and compensation for legal fees. The Stouts, who also face felony water theft charges in criminal court, have yet to return requests for comment.

San Jose Inside reported on the illegal living and work conditions at Lupin in July, which prompted some of the residents to seek legal help. The resort has been sued in the past for violating labor laws.

“This is one of the worst cases I’ve ever seen,” McClellan’s lawyer Amy Carlson says. “It’s horrible … these people are stuck, they have no money, nothing for a deposit to move anywhere else, and they’re afraid to say anything because they don’t want to be homeless. To me, that is human trafficking.”

The lawsuit also names Charles Perkins (no relation to the Los Gatos attorney of the same name), Michael Fjelstad and Bradley Chibos as defendants. Two of those three—Fjelstad and Chibos—are practicing attorneys who sit on Lupin’s board of directors and, according to McClellan’s claim, knew full well about worker exploitation yet did nothing to prevent it.

Like dozens of others, McClellan, a single mother, moved to Lupin about seven years ago in response to a job ad promising work in exchange for a home in a forested paradise. As of Tuesday, she was still working in the resort restaurant as a dishwasher.

Lupin owners Lori Kay and Glyn run what’s essentially a 110-acre hotel-style campground, where guests can rent out yurts, cabins or tents. Resident workers like McClellan are placed in trailers or cabins and charged monthly membership fees up to $450 or more—far above the price advertised online—in addition to market-rate rents. Those monthly rents and "membership" fees, however, were a moving target for live-in workers.

In 2011 or 2012, according to the suit, the Stouts announced that all workers from then on out would be considered independent contractors. But they continued to hire, fire, discipline, supervise, schedule and set compensation, as though they were on payroll. Much of the work involves manual labor or kitchen duty.

“This informal system was never reduced to a voluntary written agreement,” the lawsuit notes.

While well-heeled guests of the mountain resort spend weekends in hotel-like accommodations, the workers live in dangerous and legally substandard housing. McClellan and others have been too afraid to complain about the gutted trailers, rotted-out cabins, rat nests, faulty plumbing and electrical wiring, no insulation or heat.

"[T]he housing provided as a substitute for earned wages had very little to no 'value' as the housing was not 'adequate, decent and sanitary according to usual and customary standards' for hospitality workers," the lawsuit states.

The county's Department of Planning and Development has cited Lupin in the past for housing violations, including renting out an old rabbit hutch (pictured below right) to a resident worker.

“They’re afraid to speak up because they have nowhere else to go,” says Carlson, a partner at Employment Rights Attorneys.

According to residents, the Stouts recently installed security cameras—usually frowned upon in a nudist camp—to keep an eye on workers.

They also control the mail, according to the people who live there. Unlike, say, an apartment complex, where a U.S. Post Office worker will deliver to individual numbered boxes, all correspondence goes to the main office. That means people may not be receiving court and jury summonses, notices of renewal for government IDs or forms to sign up for a class action lawsuit.

For years, Lupin has evicted workers who conflict with management, sometimes over petty disagreements. In the unlawful detainer lawsuits, the Stouts claim that the employee stopped working, thus stopped paying rent and had to leave. In one instance, an elderly woman forced out of her cabin set up camp in the forest because she didn't want to live in a homeless shelter and had no money to room anywhere else. In other cases, according to several jilted workers who spoke to San Jose Inside, the Stouts withheld food from workers, forcing them to pick up groceries at a local food bank.

"The work arrangement is such that the employees depend on them for everything—housing, food and a roof over their heads," one resident tells San Jose Inside. "Total dependence. So if you call them out on anything, you lose it all."

Tomas Margain, an attorney with Justice at Work Law Group who helped Carlson with the case, compared the situation to conditions faced by migrant farm workers.

“I’ve been doing primarily wage theft cases for 18 years,” says Margain, a member of the county's Wage Theft Coalition, “and this is particularly egregious.”

In 2002, a former maintenance manager sued Lupin for thousands of hours of unpaid overtime. Charles Nail, who worked at the resort for six years starting in 1996, claimed he was owed for 1,000 hours of double time and 3,960 hours of time-and-half pay. The Labor Commissioner's Office agreed and issued a $150,000 judgment against Lupin a year later. 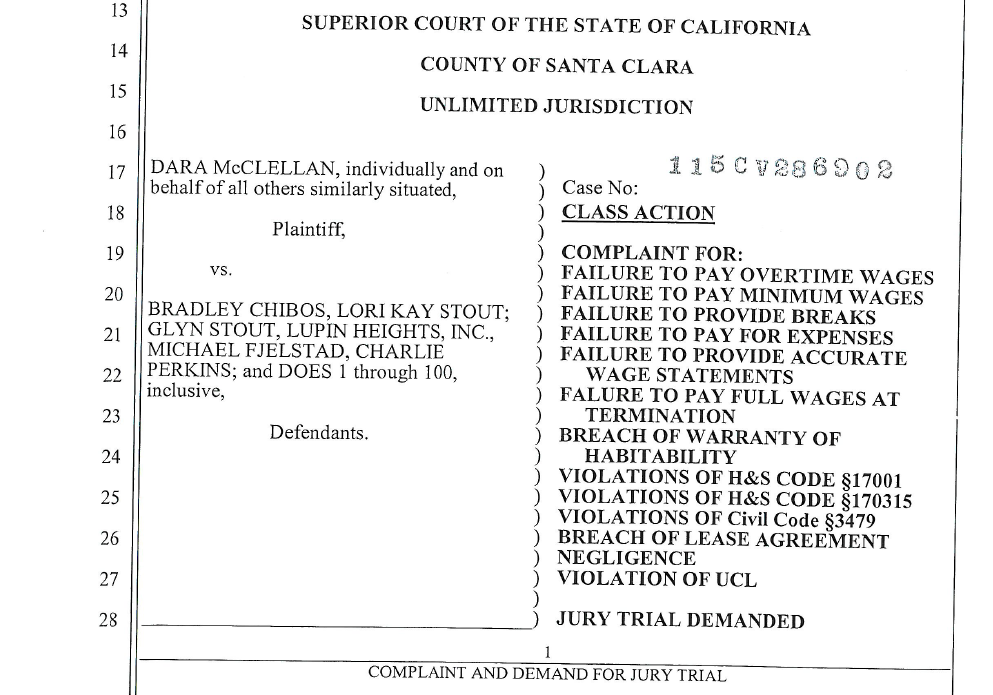