This story has been updated, as of 3pm April 26.

Baby Brandon has been found, and three suspects are in custody, police said this morning, ending a tense 20-hour manhunt.

At late morning press conference at San Jose police headquarters, Assistant Police Chief Paul Joseph said the three suspects are connected in some way to the family of the boy, 3-month-old Brandon Cuellar.

One man seen in photos and a video released by police is one of the suspects in custody, he said. A woman police brought in for questioning is another suspect in custody.  No information was released on the third suspect.

Police did not release the names of any suspects and officers said they had not determined a motive .

At the press conference, FBI Assistant Special Agent-in-Charge Scott Schelble said a child abduction by a stranger is a rare occurrence.

The boy was found alive this morning and was taken to a hospital for an evaluation as a precaution. He was in good condition and unharmed, Joseph said.

At 9:45 am on Twitter, San Jose police had announced: “Baby Brandon has been located. One suspect in custody. Stay tuned for additional details.”

A few minutes later: “Baby Brandon will be taken to a local hospital as a precaution but he has been located alive,” the San Jose Police Department said on its media relations Twitter feed. “A million thank you’s to all who assisted.”

Then, after another few minutes, police posted this tweet: “We have some of the finest detectives in the nation. Nobody went home yesterday. In less than 24 hours he was located, and three suspects are being held.”

As of 9:30am today, Baby Brandon was still missing, more than 20 hours after an unidentified man walked into a home on Elm Street in San Jose and walked out and down the street carrying the 3-month-old in a car seat.

The suspect was seen on video leaving the residence in the 1000 block of Elm Street, near Vermont Street, carrying the child.  San Jose Police are posting updates on their media relations Twitter feed. Follow this thread for updates,. “We are staying on this case until we locate the baby,” police said this morning. 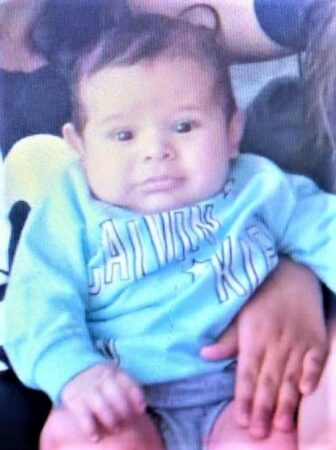 The FBI, San Jose police, California Highway Patrol and other agencies through the night continued a door-to-door search in the wide area just south of Interstate 880 and issued repeated pleas to the public for information about the brazen kidnapping first reported at 1:03pm Monday.

Police Monday evening released a chilling 28 second video of the kidnapping suspect seen on surveillance footage walking away with the baby, covered in a white blanket in a carrier seat.  The video had nearly 40,000 views as of 10:30am.

The suspect was described as a dark complexioned Latino male who was wearing black pants, a dark blue shirt, gray shoes with white trim, a gray baseball hat, black face mask, and has short hair.

The baby, identified Brandon Cuellar, was in a black carrier with a white blanket, police said. He was wearing a white, long-sleeve onesie with dinosaurs on it.

The California Highway Patrol had posted a picture earlier today on Twitter of a 2011 silver Nissan Quest, saying it was a possible suspect vehicle. The tweet was deleted after the San Jose Police Department, the leading agency for the investigation, said it hadn’t confirmed it was the car. 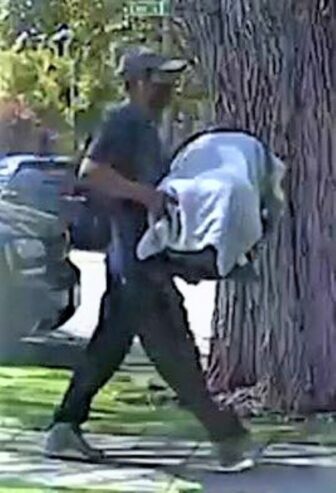 At a press conference this morning, San Jose police Sgt. Christian Camarillo said that after returning home from a shopping trip, the child’s grandmother had taken him inside and then gone back to the car to unload groceries. The baby was gone when she returned, he said.

“In that short amount of time, someone entered the apartment and left with the baby,” Camarillo said.

Camarillo made a direct appeal to the kidnapper:

“If you have this baby, please give that baby back to its mother,” he said. “We can deal with consequences after. Anybody who is a mother or father, you don’t love anything more than you love your child. This mother right now is going through a very bad time.”

Neither the grandmother nor the mother, who was at work at the time of the kidnapping, recognized the suspect from the video, Camarillo said. The child’s father is incarcerated and currently “out of the picture,” Camarillo said. “We’re doing everything we can to locate this baby.”

“Our agency will provide the most accurate timely information. We are actively working leads. We know there is a need for information, but we also need to maintain the integrity of this investigation. The number one unwavering goal is to get baby Brandon home,” police said on Twitter this morning.