Cheryl Low and Candace Marquez, employees of Honey Ladies, were just returning to their booth after a break when they heard a shot ring out. There, they saw the suspected gunman reloading a clip and begin heading toward their booth.

“The kids were in there,” Low said. “When we came back around, my boss and her husband were lying on the ground, and both were shot. My granddaughter was hiding, and I went and grabbed her. The next thing we knew they had killed the shooter.”

Low and Marquez were among the hundreds of people who flooded Gavilan College’s parking lot shortly after the Gilroy Garlic Festival shooting Sunday evening, hoping to find loved ones who were separated during the chaos.

The college’s parking lot, which had been set up as a shuttle area to get people to and from the festival, had been converted into a reunification area, where families and coworkers unable to reach their fellow festival-goers anxiously awaited each shuttle that arrived full of people.

California Highway Patrol officer Mike Sakamoto said officials were filtering people into the parking lot, where police officers were taking statements from witnesses as they attempted to piece together the frenetic scene. Garlic Festival staff provided attendees with water as they attempted to reach their loved ones by phone.

Marquez, speaking to a swarm of media that converged on the scene, described the shooter as a white male in his mid-20s, wearing a green vest and shorts.

“We didn’t see his face, because if we would’ve screamed, he would’ve shot us,” she said.

Low said she and her family were within 20 feet of the shooter.

“He was just shooting randomly at everybody for no reason,” she said. “He didn’t say a word. It’s so surreal. It’s like it wasn’t happening when it was happening. We were running for our lives.”

Low added that she was upset that “we can’t even be safe anymore in America.”

“I am so mad,” she said. “We’re talking about people’s safety at something fun like this, and look what happens. It’s so unnecessary. Then he gets shot and killed. He doesn’t have to pay for what he did. That’s what gets me so upset.”

Vendors, staff and attendees alike were all staged at the reunification center, hoping for news. One woman who ran a booth at the festival said she was still waiting to hear from her fellow crew members.

“People here have been very kind,” said one festival-goer. “Vendors have been handing out whatever they had.”

Jacob Martinez was helping tear down the Geico booth as the festival was winding down. He said he had just gotten to the Garlic Festival an hour before the shooting.

“I heard a lot of gunshots go off,” he said. “We were tearing down the booth. Someone said, ‘run, there’s a shooter,’ and that’s when I took off. It was pretty scary.” 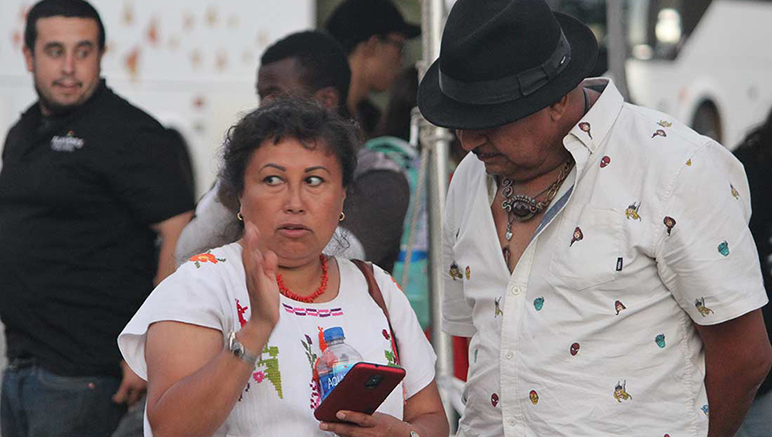