Mandatory water restrictions are on their way to Santa Clara County faucets and hoses, as the area faces “extreme drought” and dismal water supplies.

The Santa Clara Valley Water District board announced a water shortage emergency in a 7-0 vote Wednesday, setting targets to reduce water use countywide by 15% of 2019 levels.

For now, South Bay residents should refrain from fretting about fewer pots of coffee during endless work cycles or sparse showers during scorching summer heat waves. Instead, the proposed drought prohibitions include limiting watering of ornamental lawns to no more than three days a week and limited private washing of cars, boats or other vehicles without shutoff-nozzle hoses.

Additionally, the water shortage may mean restaurants won’t provide glasses of water unless requested by patrons, and swimming pools will be prohibited from being to be filled or refilled. 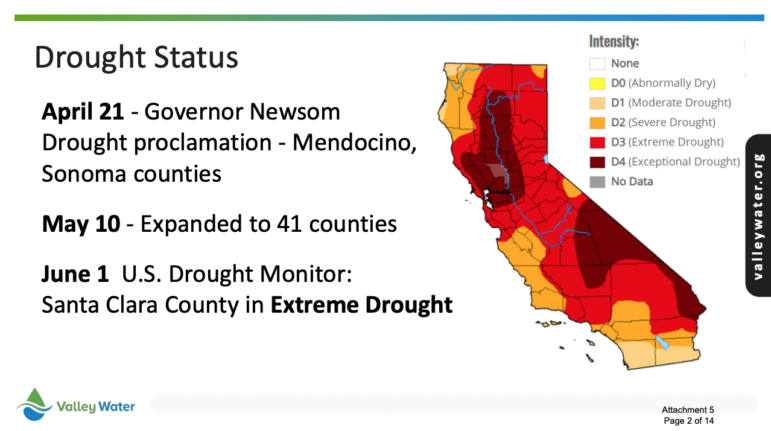 Half of Santa Clara County’s water supply is imported from outside county lines, but even those reserves are lower. Santa Clara Valley Water District Board Vice Chairperson Gary Kremen said the reduction is needed after another very dry winter, resulting in low Sierra snow pack. Additionally, these water supply issues are exacerbated by the essentially empty Anderson Reservoir, which was drained in December 2020 for seismic retrofitting and other projects.

Kremen said surging prices have now made buying water on the open market more difficult, as everyone is feeling the supply strain. The San Jose Water Company announced it will continue monitoring its supply, but didn’t yet say whether water rates for its 1 million customers would increase due to the conservation efforts.

Since cutting residential water use isn’t going to actually address the entire water shortage, director Linda LeZotte said a minimalist mindset when folks turn their faucets is one tool to address the need.

She said Valley Water will be working on providing clearer messaging and education about what exactly a 15% reduction of water use looks like—now and in the foreseeable future.

“All of that math really means nothing to someone who’s listening,” LeZotte said. “If you follow the science, this is the new normal. Conservation is going to be a way of life.”