UPDATE: The City Council went with the temporary housing proposal on an 8-3 vote.

San Jose has come to a political fork in the road in addressing its homelessness crisis. On Tuesday, the City Council will decide which route to take—one that tackles the problem now or one that bolsters affordable housing stock in the future.

The two options center on a six-acre city-owned plot between Highway 87 and Almaden Expressway. The city can use the land to shelter 100-plus homeless people in a cluster of portables by next summer, or it can build 446 apartment units, with half pegged for low-income tenants, by 2022.

Last year, the council directed city staff to think up short-term solutions as part of a sweeping effort to curb one of the nation’s largest homeless populations.

One of those solutions involved placing 17 pre-fab dwellings on the long-vacant six-acre parcel, which lies right off of Evans Lane in San Jose’s Canoas Gardens neighborhood.

The Evans Lane project would cost up to $15 million, take nine months to build and put a roof over the heads of homeless veterans and vulnerable women. It would include features that benefit the surrounding community, including a satellite library, community garden and a dog park.

But not everyone took to the proposal. An opposition group contended that the influx of 100-plus impoverished residents would attract crime. They made their case in a series of impassioned public hearings as well as on a website dedicated to stopping the project.

Leading up to the primary election, the fate of Evans Lane became a political issue debated by candidates running to replace Councilman Pierluigi Oliverio in District 6. And at the final council meeting before summer recess, elected officials put off voting on the project until it studied the possibility of instead building high-density apartments.

If the council opts for placing modular on the property, the city would fund the entire development and put low-income housing nonprofit Abode Services in charge of managing the place. There would be a security gate, security guards, case managers and several people maintaining the property. The portables would have eaves, awnings and all the trappings of a permanent structure to make it aesthetically appealing.

After 15 years, the city would then replace the community with permanent affordable homes, according to city staff.

“We could almost have it both ways,” senior city planner Patrick Heisinger told San Jose Inside. “We could house homeless people immediately and build up our permanent affordable housing supply in the future.” 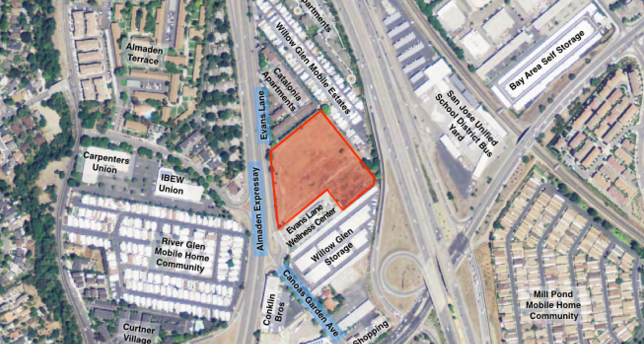 If the council decides against that option, it would need upward of $36 million and six years to realize the alternate proposal of building three six-story apartment towers. The Evans Lane discussion will take place after the consent agenda around 7pm tonight.

Never before has the city developed housing for the homeless. However, as part of a regional initiative rolled out in the past few years, San Jose has launched several projects to that end. Some involve reserving spots at new affordable housing developments, while other efforts include flipping old motels into studios with on-site social workers.

City projects underway would add 600 or so new homes for the homeless with the next three to five years, according to housing officials.

Some of the projects have drawn backlash from neighbors who worry that poor people attract crime. Abode Services, which provides housing for 4,400 people throughout Santa Clara, Santa Cruz and Alameda counties, argues that simply hasn’t been the case.

When the city, the county and the Housing Authority of the County of Santa Clara turned the Santa Clara Inn on The Alameda into housing for the homeless, crime reportedly dropped. Drug dealers that once frequented the rundown inn were turned away by Abode, according to the nonprofit manager, which rechristened the place Casa de Novo in a nod to the site’s transformation.