Chuck Geschke, a computer scientist and entrepreneur who helped develop fundamental ways of creating, sharing and printing digital documents in the early years of the personal computer, notably the now-ubiquitous PDF, died Friday at his home in Los Altos, California. He was 81.

His wife, Nan, said the cause was cancer.

In 1980, at Xerox PARC, a research lab in Silicon Valley, Geschke and fellow researcher John Warnock created a way of sending documents from a computer to a printer. Their bosses at Xerox said the company could get the technology to market in about seven years. Geschke (pronounced GESH-kee) and Warnock, believing they would miss a huge opportunity if they did not move faster, left Xerox and founded their own company, calling it Adobe.

They immediately started work on a new incarnation of their printing technology. Apple co-founder Steve Jobs visited their tiny office in Mountain View, California, in 1983 and soon offered to buy this newborn startup. Geschke and Warnock declined, but before the year was out, Apple had agreed to license their technology, called PostScript.

A month later, Apple unveiled the Macintosh, which served as a template for the next four decades of computer desktops, laptops and smartphones. Its printer, the LaserWriter, unveiled the next year, was based on PostScript and built in partnership with Adobe. With Geschke as chief operating officer, Adobe became a key player in the rise of so-called desktop publishing.

In the past, anyone looking to print a flyer, newsletter, business report or catalog needed help from a professional print shop. Thanks to PostScript and other technologies, businesses or individuals could handle many of these job themselves.

“PostScript provided a language that allowed computer software to talk with a new class of lower-cost printers,” said David Brock, a curator and director of the Software History Center at the Computer History Museum in Mountain View. “It opened up a new space where people could print on their own.”

In the years that followed, Adobe offered a wide range of other software tools for creating and printing documents, as well as digital graphics and other images. Many of the software tools, such as Acrobat, Illustrator and Photoshop, became some of the most familiar names on the computer desktop.

The company’s most influential creation was a version of PostScript for the internet age: the Portable Document Format, or PDF, which remains a vital way of sending and printing documents from almost any machine on the internet.

Geschke had a way of “looking around the corner,” said Adobe CEO Shantanu Narayen. “Civilization is all about written material,” he said. “Chuck and John brought that into the modern era.” 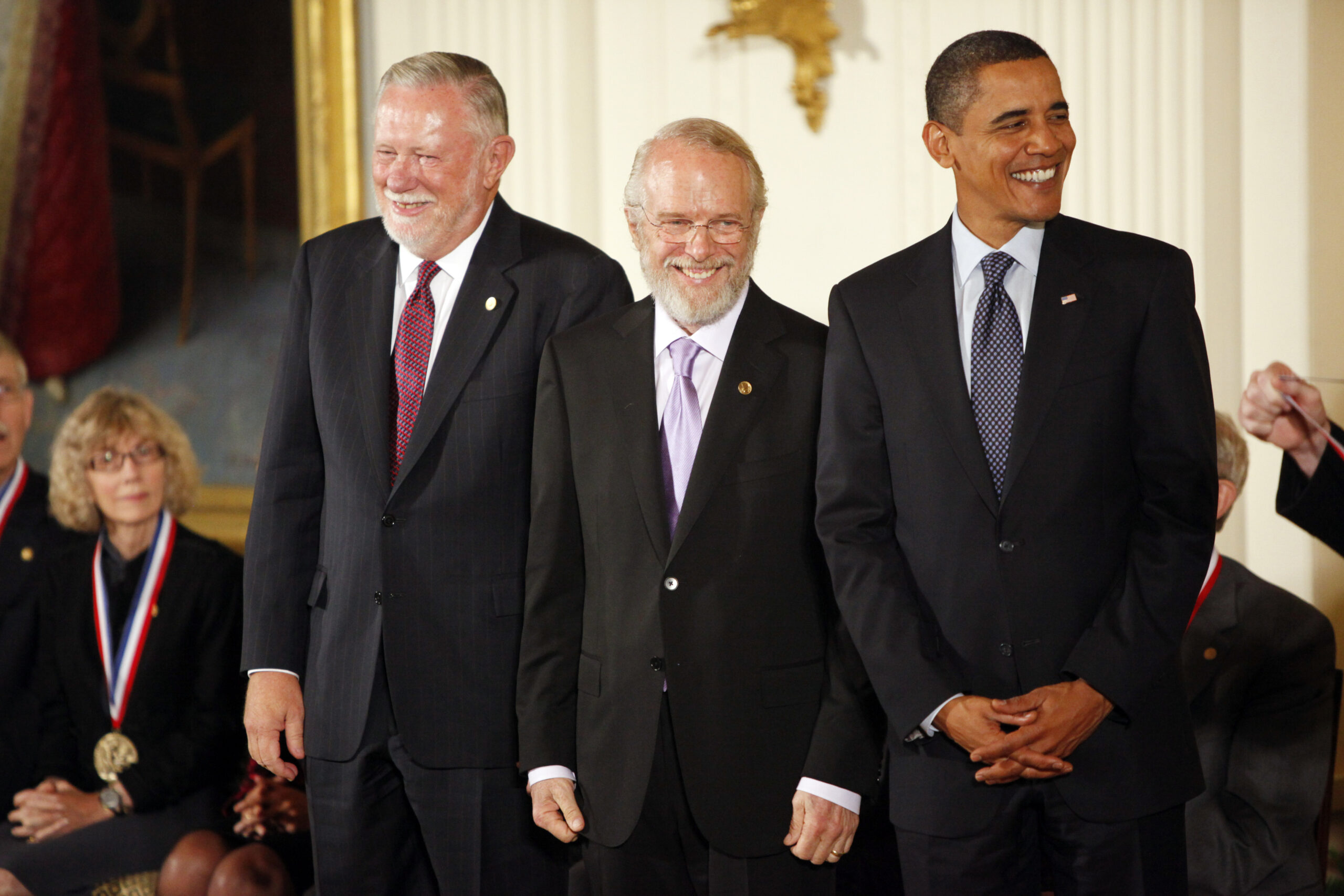 FILE -- Dr. Charles Geschke, left, and Dr. John Warnock, center, receive the National Medal of Technology and Innovation from President Barack Obama at the White House in Washington on Oct. 7, 2009. Geschke, a computer scientist and entrepreneur who helped develop fundamental ways of creating, sharing and printing digital documents in the early years of the personal computer, notably the now-ubiquitous PDF, died on Friday, April 16, 2021 at his home in Los Altos, Calif. He was 81. (Luke Sharrett/The New York Times)

Charles Matthew Geschke was born Sept. 11, 1939, in Cleveland. His mother, Sophia (Krisch) Geschke, worked for the Cleveland bankruptcy court as a paralegal. His father, Matthew, was a photoengraver, helping to prepare the plates needed to print newspapers and magazines.

Matthew Geschke often told his son that there were two things he should avoid: the printing business and the stock market. For a time, Chuck Geschke followed his father’s advice.

Raised Roman Catholic, he attended a Jesuit high school in Cleveland and joined a Jesuit seminary after graduation. But he dropped out before the end of his fourth year. He often said that he and the Jesuits had come to the mutual decision that the priesthood was not for him.

Building on the years he spent studying Latin in high school and at the seminary, he enrolled at Xavier University in Cincinnati and graduated with a degree in classics. Then he stayed on for a master’s degree in mathematics, before working as a math professor at John Carroll University, a small Catholic university in Cleveland.

Geschke's life took another turn in the mid-1960s, when he told a struggling student to leave the university. The next year, the student returned, telling him, “The best thing you ever did was kick me out.” The student had found a high-paying job selling computers for General Electric, and he soon taught his former professor how to write a computer program on the massive mainframe machines of the day.

Among the simple programs that Geschke wrote that summer was a way of printing envelopes for the announcement of his daughter’s birth. Not long after, he enrolled as a doctoral student in the new computer-science department at Carnegie Mellon University in Pittsburgh, one of the first in the country.

He received his doctorate in 1972 and joined Xerox PARC that same year. Five years later, as he was building a new research group dedicated to “imaging sciences,” he hired Warnock. The result was a new language that let computers create documents for printers.

Others at PARC had developed a personal computer called the Alto, whose graphical interface was well suited to the kind of digital printing that Geschke and Warnock envisioned. After Jobs visited PARC in 1979, the Alto helped inspire the Macintosh. It was only natural that he would approach the founders of Adobe.

A year after the arrival of the Apple LaserWriter, Adobe went public. Despite his father’s advice, Geschke had embraced both the printing business and the stock market. Today, Adobe is one of the world’s largest software companies, with a market value of $245 billion.

But the company’s rapid rise did not come without personal hardship. In 1992, two men kidnapped Geschke at gunpoint in the parking lot at Adobe headquarters and held him in chains for four days at a rented house in Hollister, California. His family agreed to pay a ransom of $650,000, but after his daughter left the money at a designated drop point, FBI agents captured the kidnappers and rescued Geschke.

He was Adobe’s chief operating officer for another two years, remained president of the company until 2000 and served as co-chairman of the board until 2017. He also served on the boards of the San Francisco Symphony, the Commonwealth Club of California, and the Nantucket Boys and Girls Club in Massachusetts, and was chairman of the University of San Francisco’s board.

In 2009, then-President Barack Obama awarded him and Warnock the National Medal of Technology and Innovation.

In addition to his wife and daughter, Kathy, Geschke is survived by two sons, Peter and John, and seven grandchildren.

Although he helped build one of the world’s richest companies, Geschke did not consider himself a businessman. He liked to say that he had never studied business and had read only one book on the subject.

Rather, he said, he saw himself as an engineer. “Engineers dream of building something that millions of people will use; that’s their ultimate goal,” he said during an event at the Computer History Museum in 2017. “I don’t think many engineers are motivated by money. They’re motivated by having an impact.”