George Shirakawa Jr. stole an election with a fraudulent mailer, and Judge Ron Del Pozzo called his sentence of 45 days community service "a win-win-win-win situation." That was far from the consensus.

In a bizarre three-hour hearing Friday, Del Pozzo went from championing a plea deal to nearly having attorneys for both the defense and prosecution held in contempt.

Shirakawa admitted in a statement to the court that he “failed to serve and protect my community by producing” a fraudulent campaign mailer that depicted Magdalena Carrasco as a communist in her 2010 council race against Xavier Campos. The ex-county supervisor did not say how or why he produced the mailer, which was linked back to him through a DNA match.

Such details seemed inconsequential to Del Pozzo, who again failed to disclose his past political ties to the defendant. Not only was Shirakawa one of the judge's top endorsers during his first run for a seat on the bench, when Shirakawa was still vice mayor of San Jose, but Del Pozzo's wife also gave Shirakawa's 2008 county supervisor campaign a $250 contribution.

During the sentencing hearing, Del Pozzo simultaneously criticized the prosecution’s case as anything but a “slam dunk” while also castigating defense attorney Jay Rorty for “ineffective counsel.” The judge seemed especially discomfited by the fact that Shirakawa’s county-provided attorney did not ask for his client to be remanded after being sentenced to jail in 2013 for campaign fund embezzlement. Del Pozzo said any punishment for mail fraud would then have been lumped into a concurrent sentence if a guilty or no contest plea were entered.

In many ways, the judge said, the two cases should have been combined into one trial so the court could get back to focusing on “more serious cases.”

The prosecution argued from the other side of the spectrum, that Shirakawa’s mailer helped “steal an election,” subverting the democratic process by deceiving some Vietnamese voters into thinking Carrasco was a communist. Less than a few weeks after the mailers first appeared, she lost the primary election to Campos by a mere 20 votes. Campos was a close friend and political ally of Shirakawa's, and prosecutors have alleged that Assemblymember Nora Campos, Xavier's sister, paid Shirakawa $5,000 to produce the illegal mailers.

When prosecutor John Chase, a deputy district attorney, attempted to interject a comment during Del Pozzo’s sentencing, the judge became agitated that the prosecution was trying to continue arguing its case. Chase responded that he only wanted to clarify facts and felt the judge had unfairly characterized the work of defense attorney Jay Rorty, which is when Del Pozzo called for a bailiff to place Chase into custody for contempt of court.

A moment later, though, the judge decided instead to stop the hearing and call the office of District Attorney Jeff Rosen on speakerphone. After several painfully awkward minutes, in which his court clerk couldn’t reach Rosen, Del Pozzo spoke with Chief Assistant DA Jay Boyarsky. 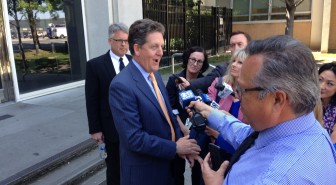 "It's unusual to receive a phone call like this and handle it over the telephone," Boyarsky said for the court to hear, agreeing to walk over to the courthouse. But when Boyarsky attempted to address the judge in court, Del Pozzo informed him that he was not asked to appear to clarify Chase’s intent but to “diffuse the situation” by keeping the prosecutor quiet.

There were more unusual circumstances to play out.

Several times Del Pozzo described himself as a victim in the press, saying Chase and others had mischaracterized to reporters how Shirakawa’s no contest plea had been reached in the judge’s chambers. The DA’s office has repeatedly said it felt Shirakawa deserved a year in county jail for the felony count of false personation.

“I understand what’s going on here today,” Del Pozzo said in court, “but clearly I’m not going to be thrown under the bus by the DA or anyone else.”

He added that the prosecutor should “get real” and accept the fact that “this is a win-win-win-win situation, and Mr. Chase knew when he made that deal that day.”

Del Pozzo also admitted that he tried to persuade the Mercury News editorial board out of writing an opinion piece on the trial.

“One person in the media wanted to do an editorial on this case, and I talked to them,” Del Pozzo said. “All I did was ask the person to keep an open mind and ask them if they would just perhaps defer on writing their article until they heard on what happens at sentencing, what the allocution is, what the arguments of the parties, witnesses they put on, any sentencing.

“I even offered the person writing the editorial a copy that I would give them, of some of the reasons for the indicated sentence, which I mentioned at the time of the plea.”

Following the hearing, Boyarsky told a group of reporters outside of the courthouse that the DA’s office intended to submit a written statement detailing its misgivings on the judge’s handling of the case.

“We don’t accept some of the assertions that the judge stated on the record, and strangely neither attorney was afforded the opportunity to even make a record about what those statements were from the judge,” Boyarsky said. “Nonetheless, we respect the process, however strange or unusual the process can become.

He also said he felt every judge should take caution on disclosing potential conflicts of interest.

Rorty and Shirakawa met briefly with reporters outside of court and said they were pleased with the ruling. But even the defense took issue with Del Pozzo's refusal to allow comment following the sentencing. When the judge asked Rorty if he had anything to add to his description of events in the case, he answered: "The court has mischaracterized the record.”