Kneeling and passing paint trays and rollers, the artist-activists, including many children, outlined and painted the words “Black Lives Matter” over the pavement of the quiet residential street. In the windows of many houses surrounding the park hung signs emblazoned with the same slogan—some skillfully drawn in permanent marker, others embellished with crayon drawings. 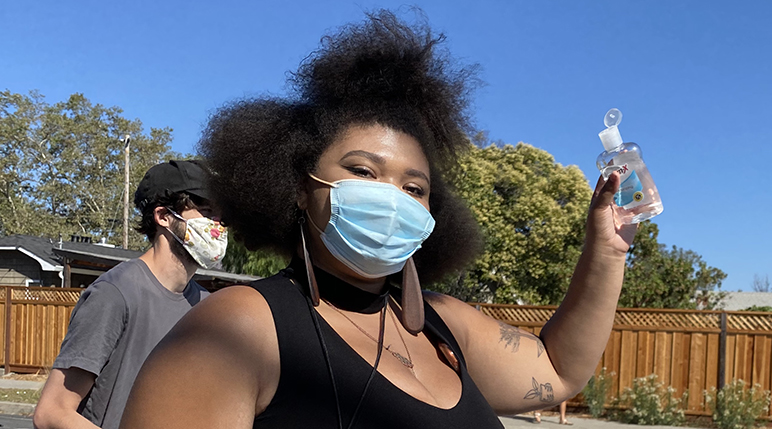 Organizers made sure attendees stuck to public health protocols, staying several feet apart and using hand sanitizer as much as possible. (Photo by Amani Hamed)

The protest was organized by BLACK Outreach (short for Black Liberation and Collective Knowledge Outreach), which formed after the murder of George Floyd.

Co-organizer LaToya Fernandez—founder of Youth Hype, a community based nonprofit that empowers young people in San Jose—said the event was also held in solidarity with the family of Anthony Nunez, who was killed by San Jose police on July 4, 2016.

Officials from San Jose’s Department of Transportation did not authorize the mural, and it’s unclear at this point whether the city plans to keep it. 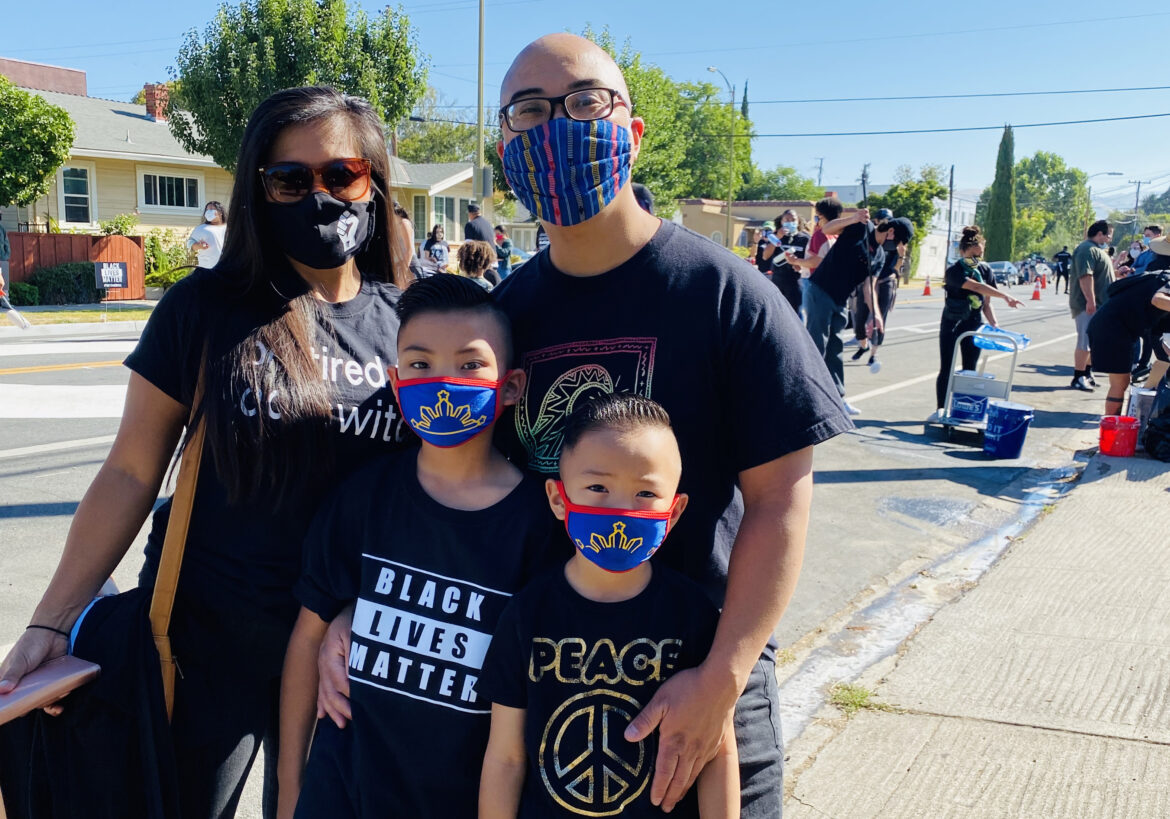 The event was geared toward kids and families. (Photo by Amani Hamed)

Two of the organizers with BLACK Outreach, who asked to remain anonymous, said that this protest differed greatly from the initial marches in downtown San Jose. “We’re definitely trying to do more stuff to get families and everybody involved, things that are kid friendly,” one organizer said.

In addition to the family-oriented activity of painting, the protest was also enlivened by free food, a poetry reading, and live music.

Organizers said BLACK Outreach is in the process of setting up a film screening, hoping to use Westwind Capitol Drive-In as a venue in order to encourage physical distancing. BLACK Outreach has organized nearly 30 protests to date, from marches in downtown at the height of the unrest following George Floyd’s killing by Minneapolis cops, to art events, a youth night, a history night and an event highlighting Black trans lives.

“We’re all the same community, whether you’re one year old or a hundred years old. We have the same fight, the same oppression, same struggle,” a second BLACK Outreach organizer said. “So the only way we’re going to get things changed is to do it together.” 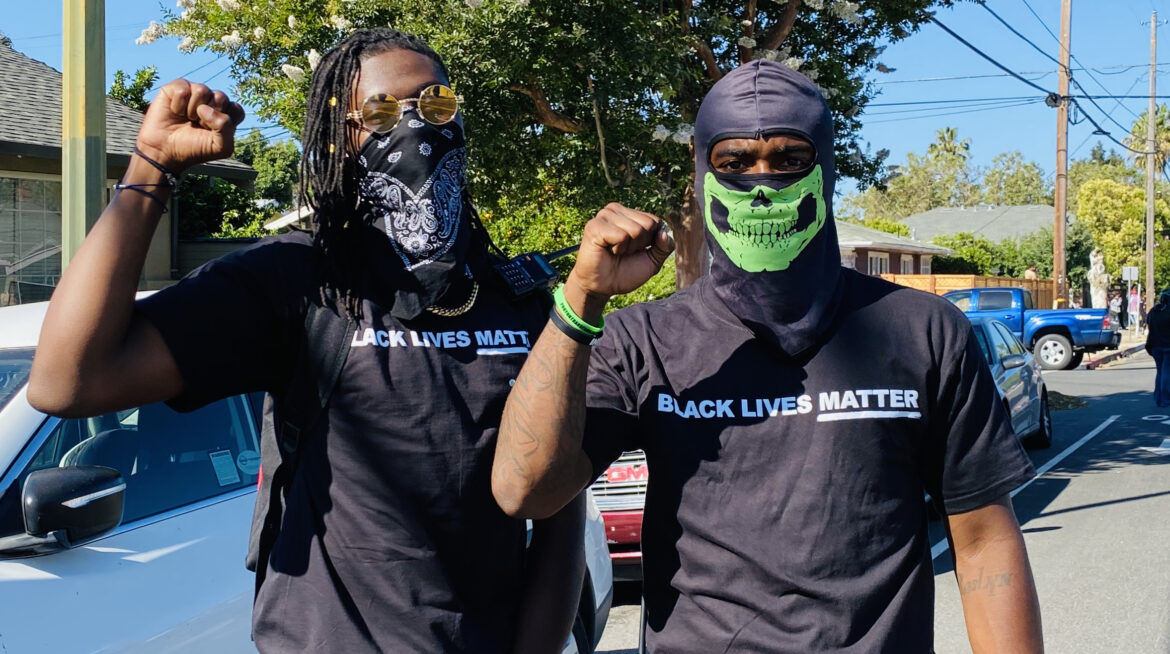 The slogan that inspired the mural was ubiquitous at the event, on T-shirts and posted up in windows of many houses in the neighborhood. (Photo by Amani Hamed)

The Fourth of July street-painting protest was also supported by HERO Tent (Human Empowerment for Radical Optimism), which supplies food, water, and first aid supplies. At the Backesto Park protest, a volunteer, who also asked to remain anonymous, offered hand sanitizer to protesters. The volunteer said this relaxed protest atmosphere and community spirit is something San Jose has been missing. 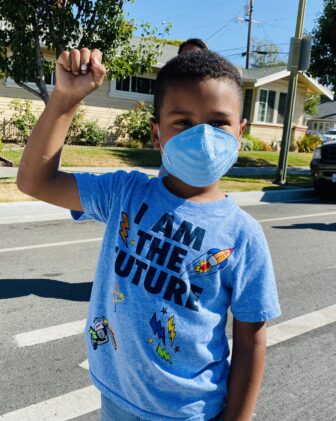 “I’m all about it. I really support it, I think this is exactly what the community needs,” she told San Jose Inside. “We need this kind of support in our community, it’s something I’m really passionate about.”

The HERO Tent volunteer called the family-oriented protest an “outlet of positivity.”

In addition to the protest in San Jose, which also partnered with a “unity march” which would join the Backesto Park group from City Hall, HERO Tent volunteers said they also planned to volunteer at partner protests in Oakland and Santa Cruz.

“This is a community effort, we are a team, we’re one, we just want to make art and get some progress made,” she said.

While drawing attention to the Black Lives Matter cause and their mission to defund the police, BLACK Outreach organizers highlighted the importance of bringing young and old together. “Even in the Bible it says that ‘they call us young because we’re strong, we call them old because they’re wise.’ If we can get the strong and the wise together, we can’t lose,” an organizer said.

BLACK Outreach plans to continue organizing protests throughout the continued shelter-in-place order, encouraging participants to wear masks and planning events in a way that allows for physical distancing.