Scroll from the bottom up to read in chronological order.

Dwindling numbers prompted protesters to decamp earlier than initially planned. With fewer numbers, the higher the risk of people being arrested, organizers explained. So the event originally announced as an all-nighter wrapped up well before midnight. 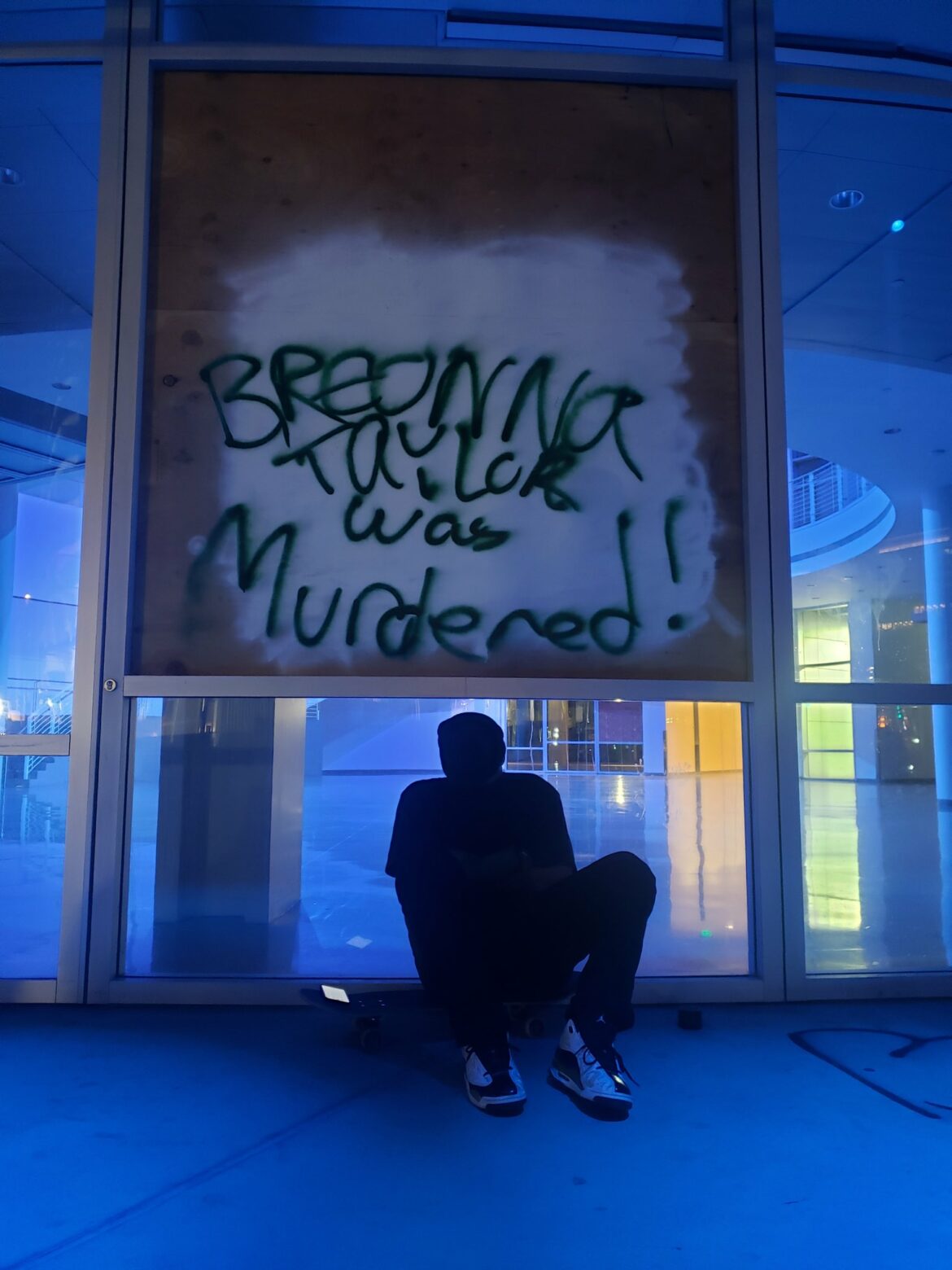 By nightfall, the plaza around the City Hall was marked by graffiti, a mural and chalk art. HERO Tent dismantled their food-and-water stations as music played and organizers began heading out. A young woman danced by herself in front of the rotunda.

Dancing in the dark. pic.twitter.com/1YUSWnUtmm

Police kept their distance for the duration of the event, although they clearly had a strong presence in downtown, with cop cars at the ready and a helicopter circling overhead.

Protesters marched from City Hall to West Julian and St. James streets, where they set fire to a blue Trump banner and American flag atop the bronze likeness of Thomas Fallon—whose role in San Jose’s founding has long been the subject of historical controversy.

After the statue was commissioned by the city’s redevelopment agency in 1988, many of San Jose's Latino residents denounced it for, according to an old San Francisco Chronicle article, memorializing “a conquering army that had stolen California from Mexico, beginning decades of oppression and abuse by whites.”

More than 100 people marched to the Thomas Fallon Statue in Downtown San Jose, near the entrance to State Routh 87 North. The crowd watched as a small group of people spray painted messages at the base of the statue. https://t.co/IvTTwzO3pq pic.twitter.com/mkuv0vQ39L

“Fallon, they said, lynched and murdered Mexicans,” the 2002 news story continued. “And in his latter years, they charged, Fallon, who became San Jose’s 13th mayor, was a drunkard who abused his wives.”

Messages left on the statue included one decrying “white settler colonialism” and others declaring “Raza 4 BLM,” “Say Her Name” and variations of Black Lives Matter. 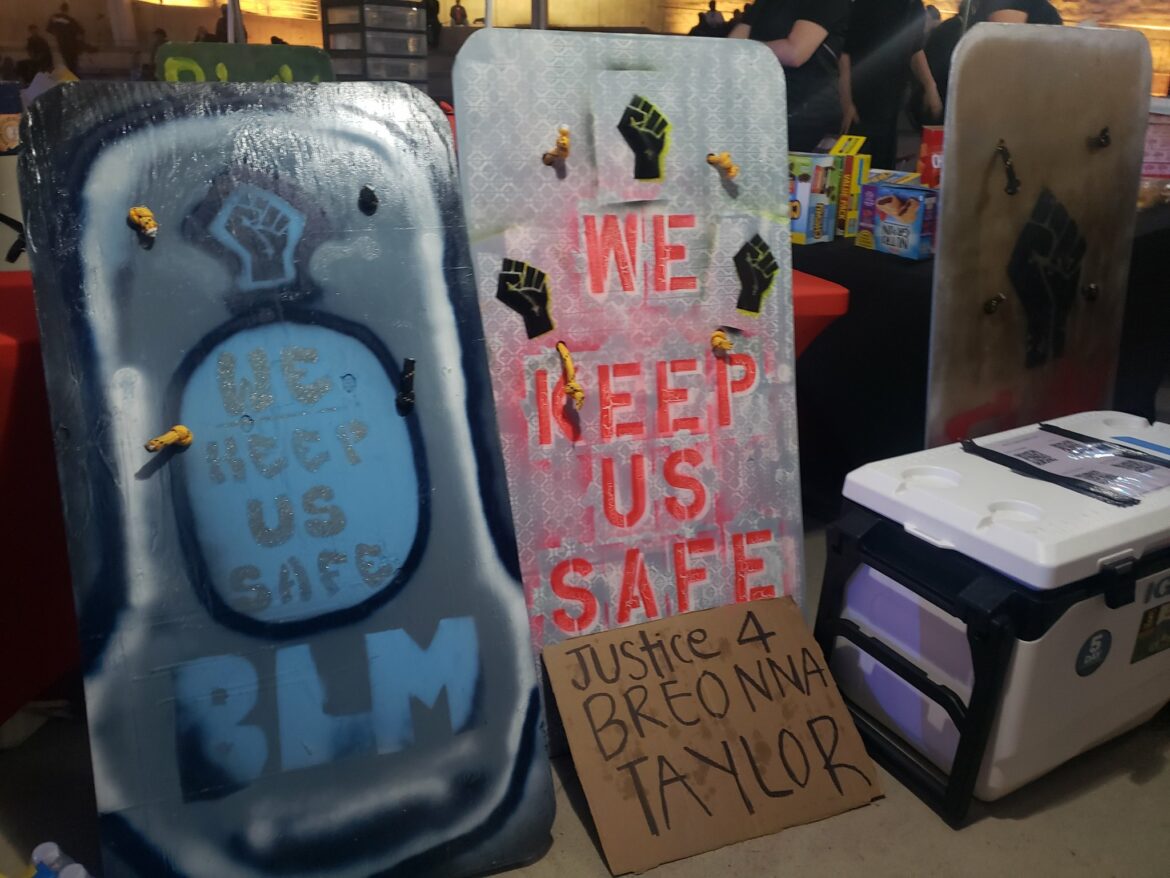 HERO Tent brought a bunch of hand-decorated shields, which are propped up around stations offering food and water. Organizers say they plan to camp out all night.

So far, no visible police presence—at least not compared to the George Floyd protests this past spring. Police staging at SAP Center, though, and some attendees reported seeing snipers overhead. When asked about the city’s approach to policing the protest tonight, a spokesman for the department declined to comment.

8pm: City Hall gets a makeover. 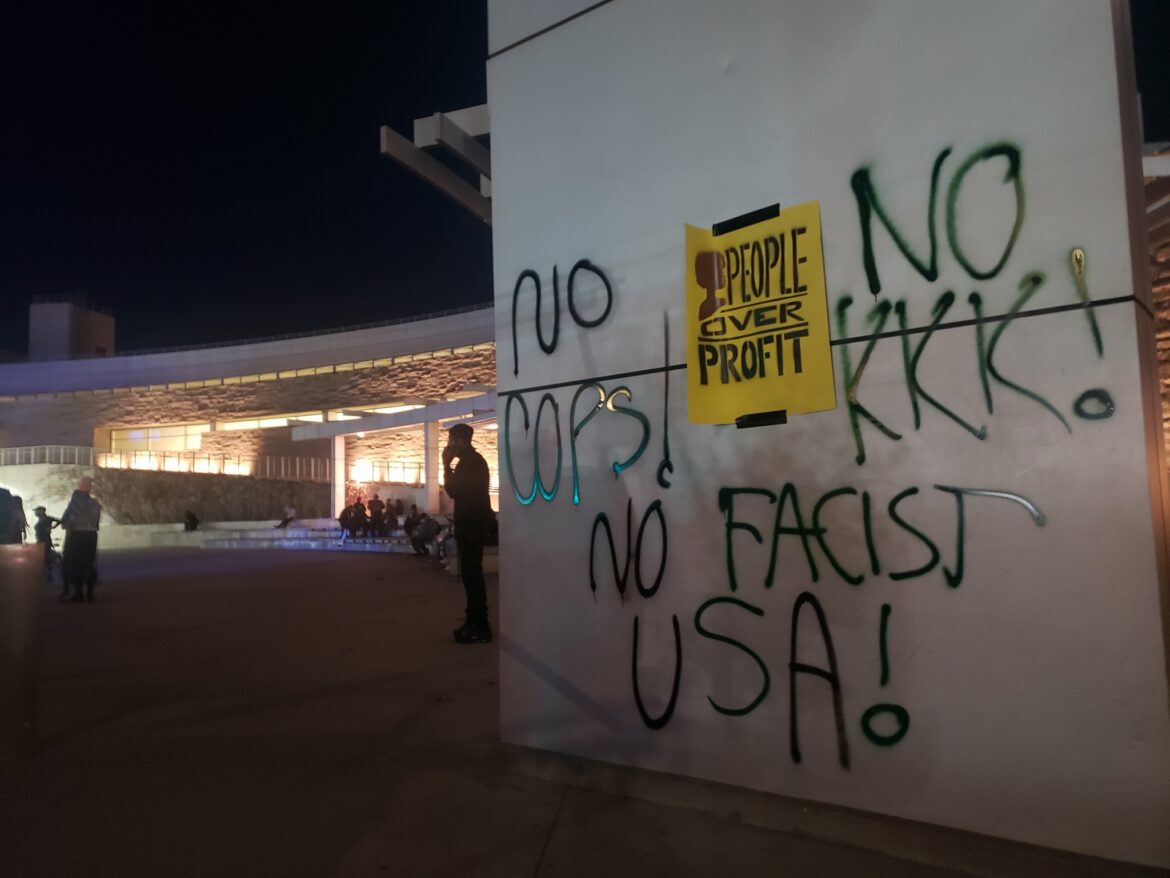 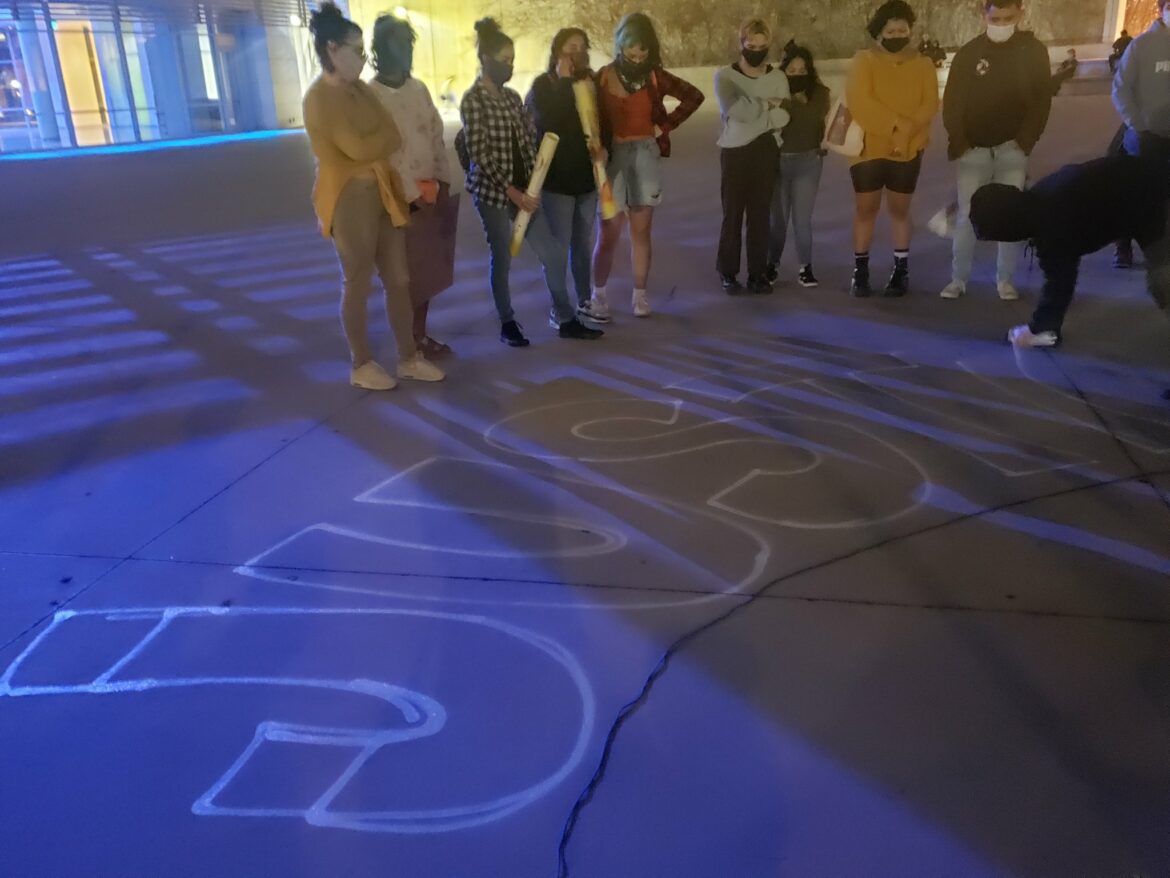 A dozen or more of the attendees picked up paint cans and brushes to fill in a mural that reads “Justice for Breonna” in blue letters. 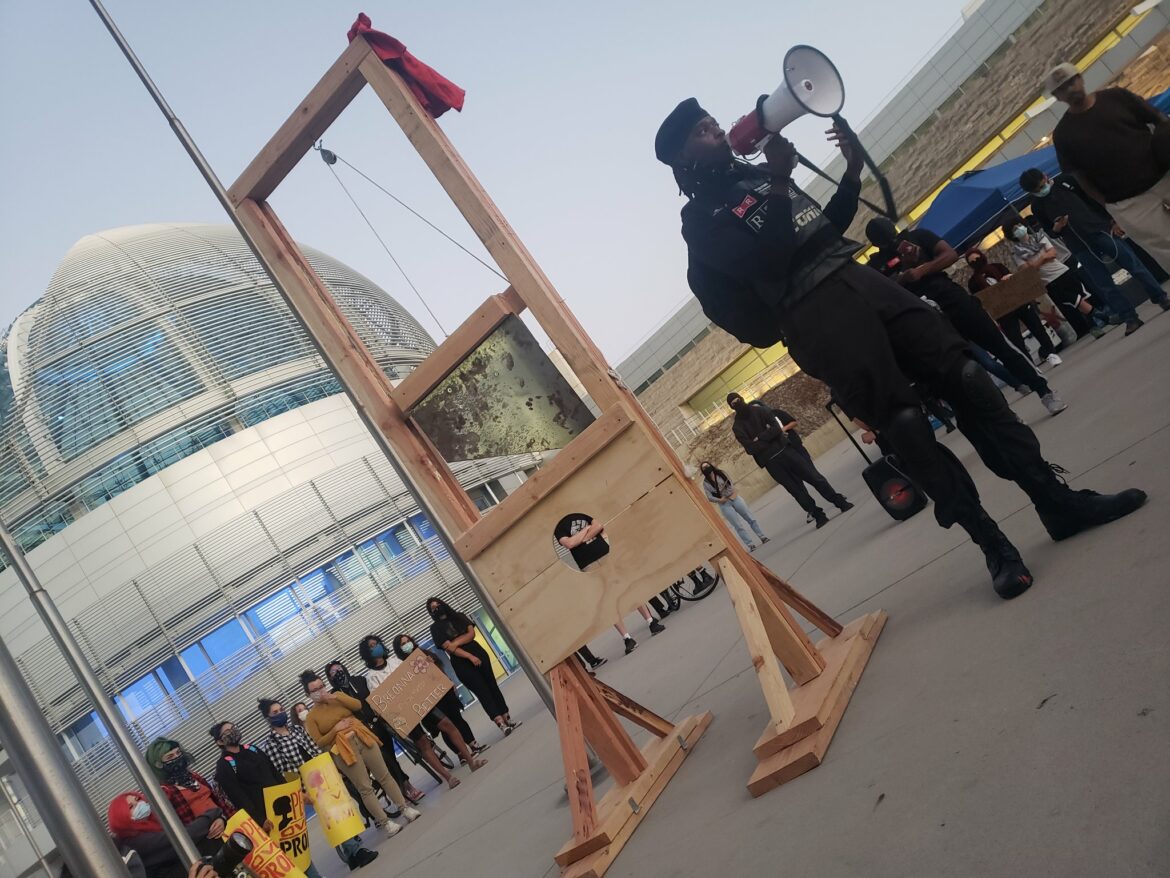 Activists erected a guillotine replica, which they said symbolized accountability, uprising and the spirit of the French revolution. Lou Dimes, head of BLACK Outreach SJ, said it also represents “f*cking the system.”

Another clip from earlier. Organizers explain meaning of the guillotine as symbol of uprising, of the French and American revolutions. Someone from the crowd chimes in about the link between French Revolution and creation of 1st Black republic: Haiti. pic.twitter.com/pIlLeSxFzd

After a speech about the sculpture’s meaning, Dimes led the crowd of a couple-hundred-or-so onlookers in chants of “Black pride” and “Black power.”

"You damn skippy, we matter. Right?But we gotta put a little more strength behind that," B.L.A.C.K Outreach leader says. "So, can I get a 'Black Pride?'"

A couple hundred protestors have gathered in front of San Jose City Hall, chanting “no justice, no peace, no racist police” and “say her name: Breonna Taylor.”

Kiana Simmons, the co-founder of activist group HERO Tent, showed up with knee pads, a gas mask and other protective gear.

“Police have shown that they will do anything to stop us,” she says.

Simmons also brought a stick with donuts hanging off the end, saying it’s meant to inject humor in an otherwise somber event. “Plus, it gets under the cops’ skin,” she adds. 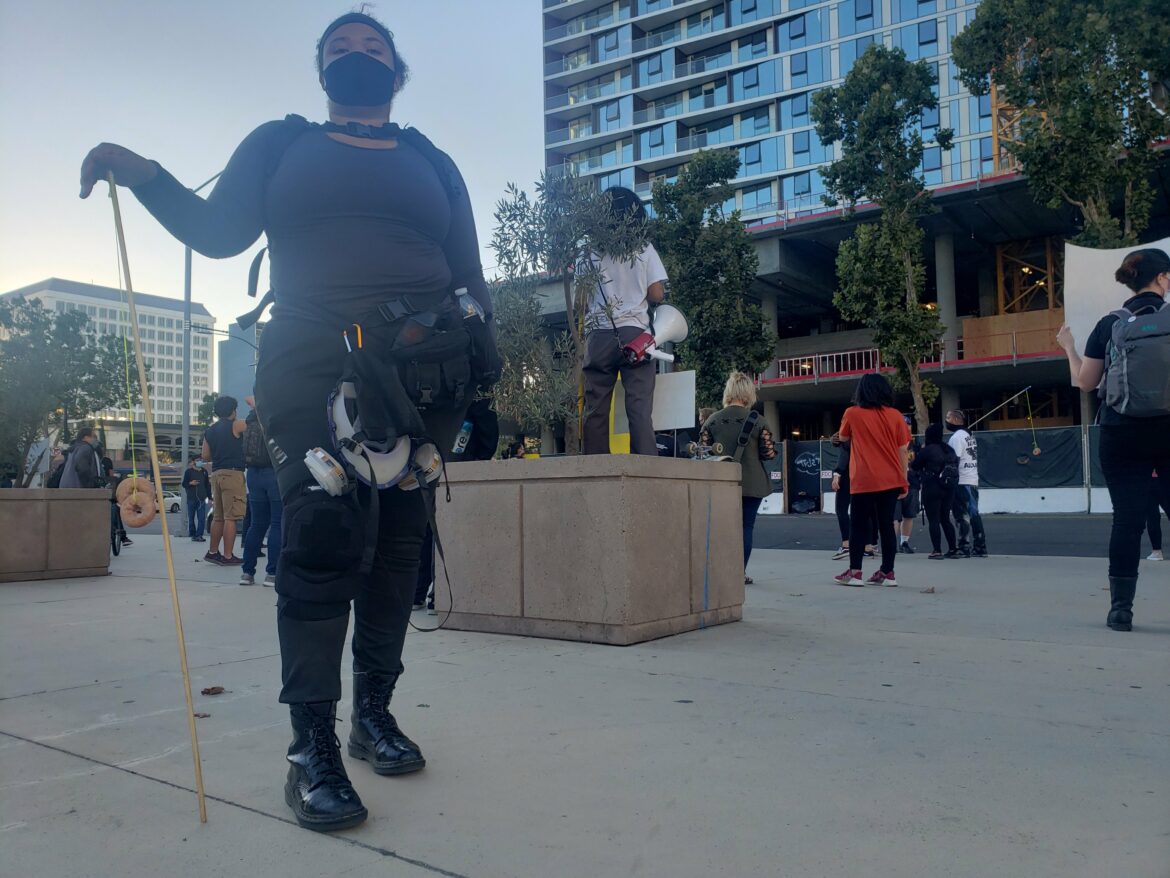 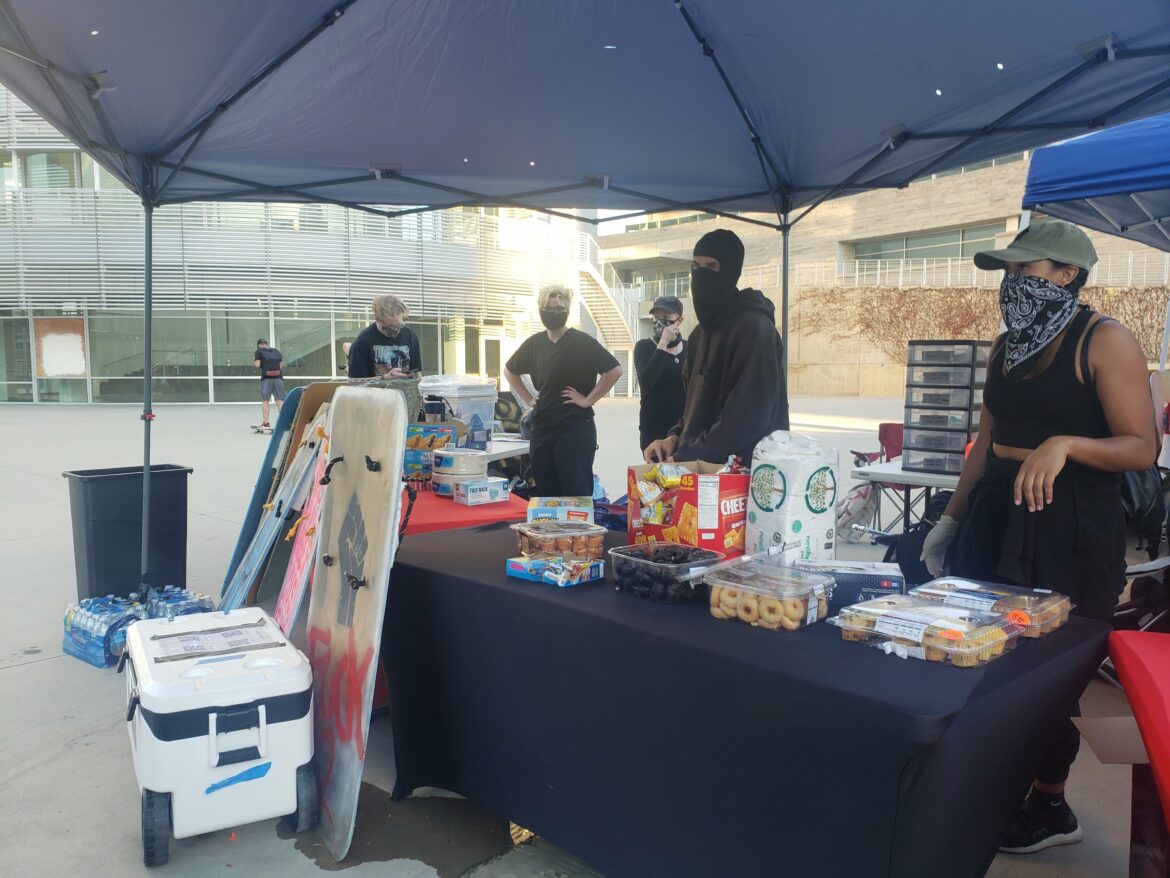 Volunteers at the HERO Tent hand out pizza and refreshments. 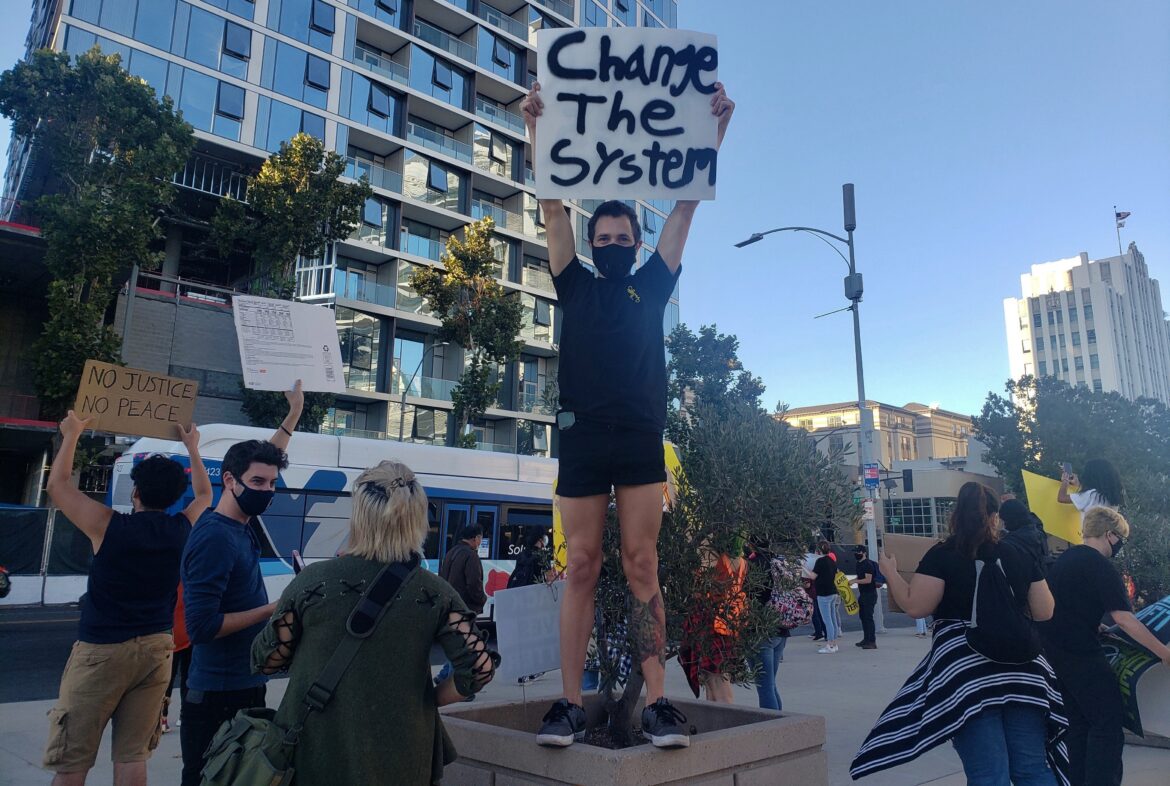 Most of the protesters showed up with handmade signs. 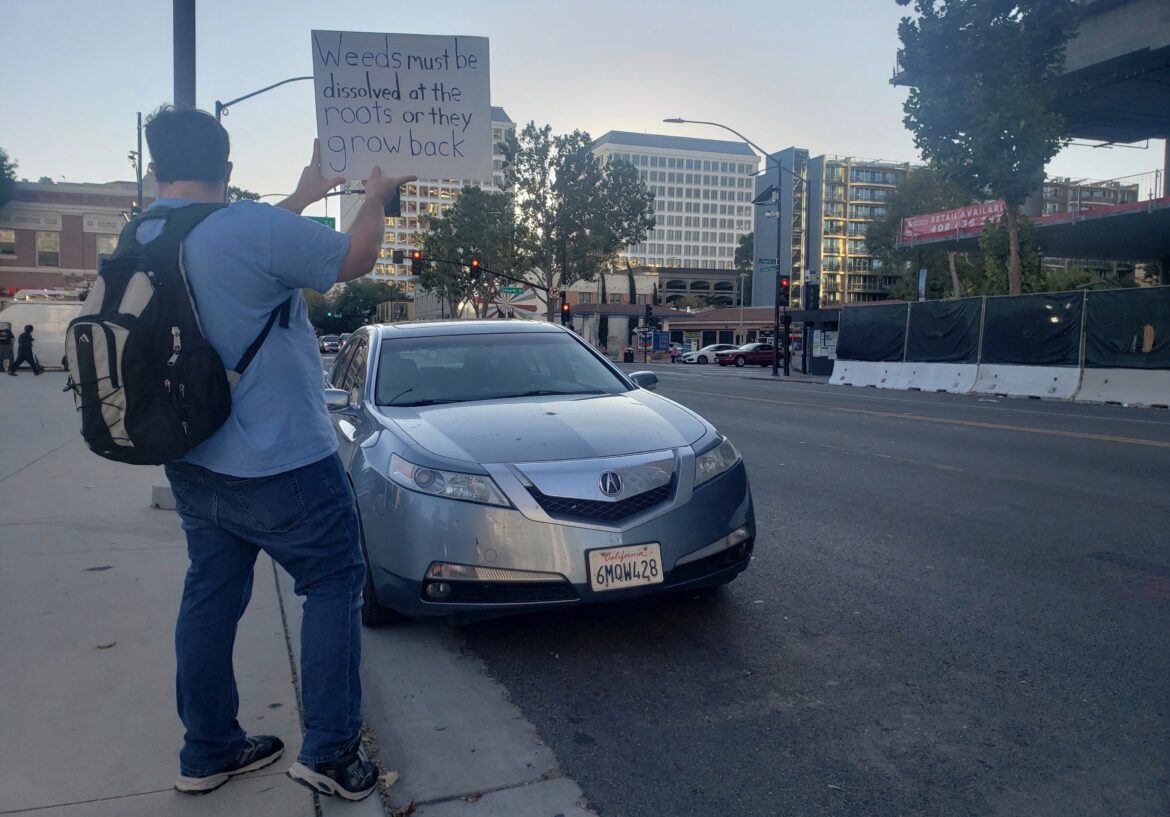 Passing cars honked in support of the demonstration. 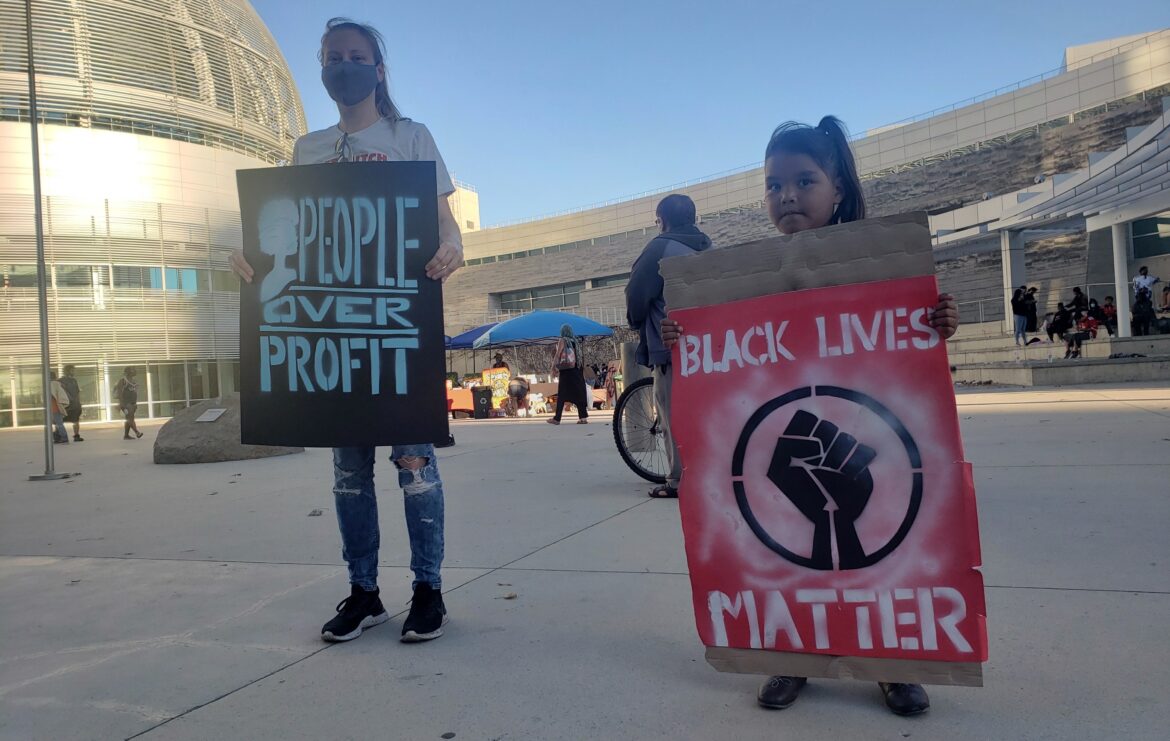 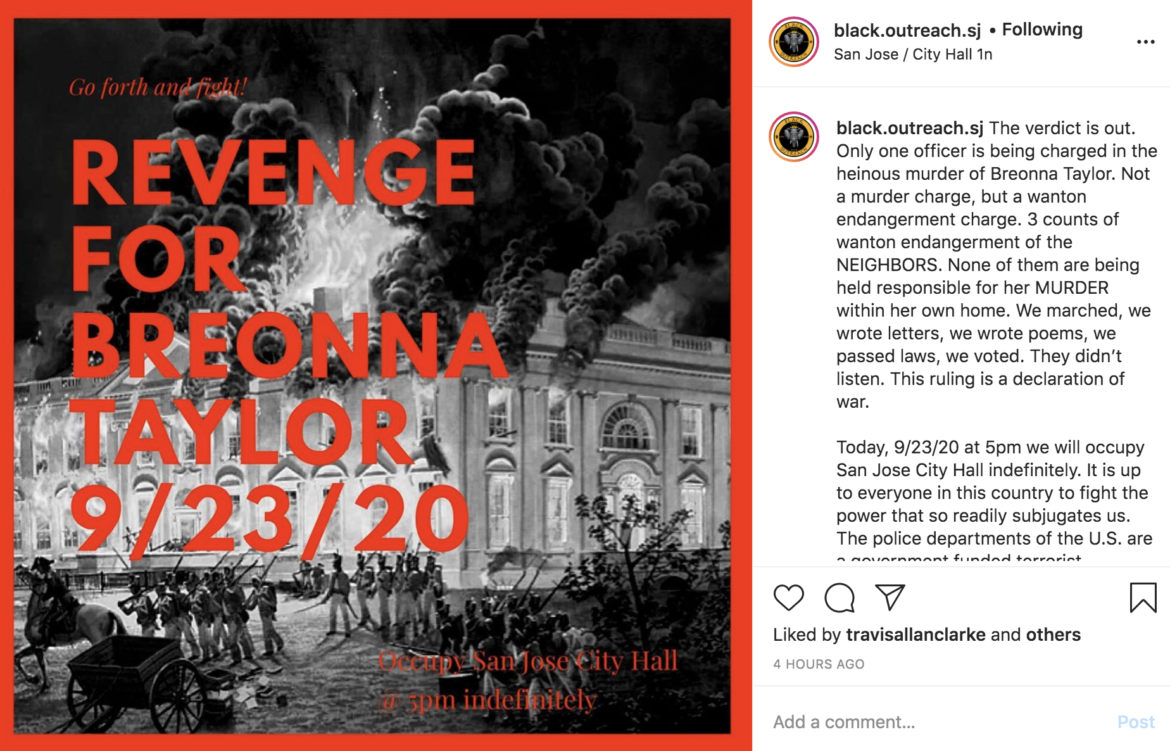 The long-awaited indictment charges one former officer with three counts of first-degree wanton endangerment. Two others got off the hook completely.

That means not a single cop was charged with killing Breonna Taylor, a 26-year-old emergency medical technician shot to death by Louisville police in her own apartment.

Officers riddled the young woman with bullets on March 13 while executing a no-knock search warrant linked to a suspect who didn’t even live there.

There was no body-cam footage to record what happened. But according to news stories, Taylor’s boyfriend, Kenneth Walker, fired a single shot at the men who broke into the home, reportedly unaware that they were officers.

His attorney says they never identified themselves as law enforcement and that he was acting in self-defense. Walker even dialed 911 as Taylor crumpled to her hallway floor in a hail of bullets. Audio of the frantic call suggests he had no idea the intruders were police.

In the six months that followed, protesters turned Breonna Taylor into a household name. Murals of her likeness sprang up throughout the country as demands for justice began to mount. Days before the indictment was unveiled, Louisville authorities declared a state of emergency, bracing for reaction from a city on edge.

Protests over the grand jury decision were inevitable. Hundreds of cities throughout the nation joined in the marches and demonstrations. In San Jose, protesters are already congregating around City Hall, where they say they plan to stay the night.

“The verdict is out,” local activist group BLACK Outreach SJ wrote in an Instagram post about the event. “Only one officer is being charged in the heinous murder of Breonna Taylor. Not a murder charge, but a wanton endangerment charge. [Three] counts of wanton endangerment of the NEIGHBORS. None of them are being held responsible for her MURDER within her own home. We marched, we wrote letters, we wrote poems, we passed laws, we voted. They didn’t listen. This ruling is a declaration of war.”