Political donors have spent more than $1.6 million on three San Jose ballot measures and another $822,000 on three City Council contests, according to the latest round of campaign finance reports.

Measure F, which would reverse some of a controversial pension reform plan voters approved in 2012, raked in the most cash. More than $958,000 poured into yes-on-F committees. No one raised any money to oppose the settlement, which the city reached earlier this year after protracted negotiations with its police, fire and other labor unions.

Another San Jose-specific proposal on the ballot, Measure E, which would require employers to offer more hours to part-time employees before hiring new workers, garnered close to $593,000. The “Opportunity to Work” initiative drew opposition from the San Jose Silicon Valley Chamber of Commerce, which raised $59,000 to defeat it.

The other citywide initiative is Measure G, which would update San Jose’s business licensing tax for the first time in three decades. People donated more than $14,000 to support the plan, which proponents drafted collaboratively with policymakers before bringing it to voters.

Support for candidates vying for three open council seats fell along the usual divide between labor and business interests.

In the race to succeed terming-out Councilman Ash Kalra in District 2, Sergio Jimenez outraised opponent Steve Brown by a factor of almost three to one.

Jimenez, who works for the Santa Clara County Public Defender’s Office, saw more than $91,000 raised in support of his campaign—about a third of it through union-backed independent committees. Downtown Councilman Raul Peralez donated directly to his campaign along with county Supervisor Ken Yeager, former San Jose Councilwoman Nancy Pyle and the LGBTQ political advocacy group BAYMEC.

Unions raised another $97,000 to support Chapman through independent committees and $4,000 against her opponent. Davis saw a similar outpouring of support from chamber and the National Association of Realtors, which put a combined $96,000 into independent committees to get her elected and $57,000 to oppose Chapman.

District 8 hopeful Jimmy Nguyen reported nearly $36,000 in donations compared to barely more than $12,000 for his opponent Sylvia Arenas. Chamber and realtor PACS raised about $89,000 for Nguyen and $43,000 against his opponent. Meanwhile, the South Bay Labor Council and a committee backed by state Senate Pro Tem Kevin De Leon put another $75,000 behind Arenas.

Below is a list of the latest totals for San Jose candidates and measures. To look them up by name, visit the City Clerk’s campaign finance portal. 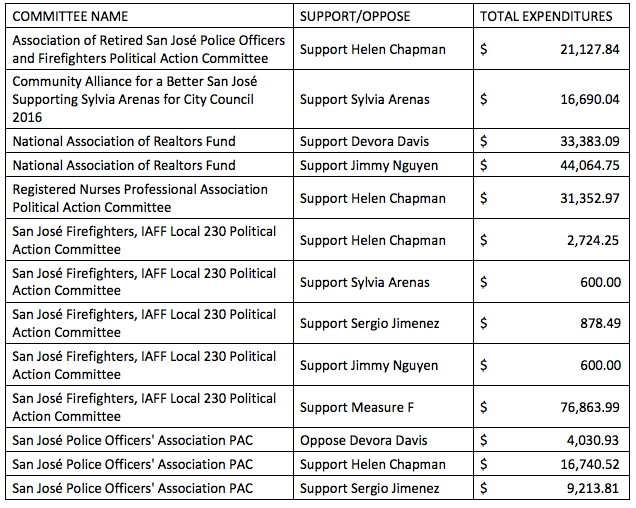 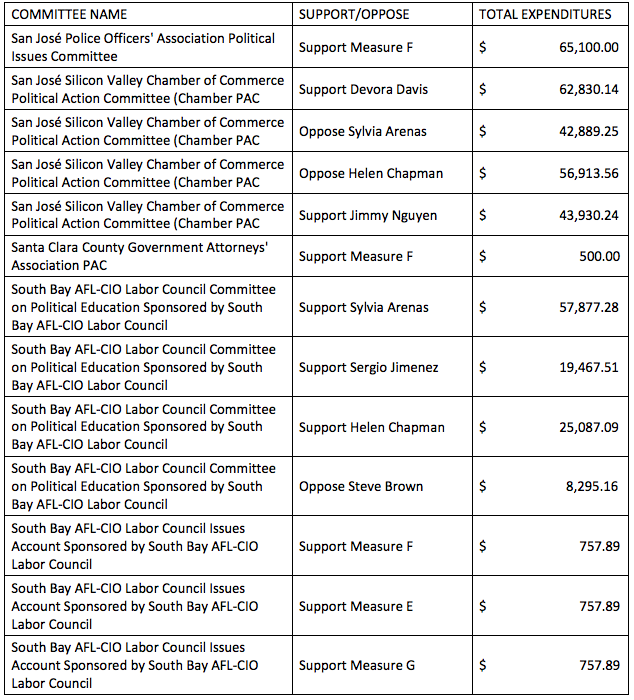