Seasoned beer drinkers strolling through downtown San Jose aren’t always looking for a bar where they can get loaded.

Local craft beer lovers have been looking forward to returning to sipping on the foam in daytime taverns filled with other enthusiasts. The diverse food menus are just as enticing—Mexican-style cuisine, vegan options and one item dubbed the “Pickle Jar,” which appears to be a jar filled with pickles.

Manú Arturo makes sure to patronize Good Karma Artisan Ales and Café for the occasional chile verde burrito when he has a minute to spare. He said a customer who sees someone imbibing behind the bar might not think anything of it—because it's a drinking establishment.

While he doesn’t drink much of anything anymore, Arturo found out online and from friends that the craft beer establishment’s owner stepped down after accusations of sexual assault hit social media. The revelation sparked a conversation over sexism and harassment in the beer industry, and workplace cultures dominated by heavy drinking and stress.

Pub and brewery workers across the state turned to Instagram in the past weeks to share personal experiences of sexism, assault and work environments where drinking was often encouraged.

In San Jose, such accusations culminated in the May 30 resignation of Good Karma’s owner, Ryan Summers. He also ran the café and nearby restaurant, Pizza Flora, and has been a fixture in downtown San Jose since at least 2006.

A few doors down, the general manager of another craft beer spot was brewing a personal letter of his own.

Though no one has accused Rob Monroe at Original Gravity Public House of anything, he said he felt the need to hold himself accountable for his past management style, because it contributed to the tension his employees faced.

He used to drink on the job as a way to relieve the stress that came with managing a workforce, to excess at times, Monroe said. Burnt out, he took a break from the craft beer eatery in October 2019. The time off, he said, gave him space to reflect on his eight years working at the downtown San Jose pub.

“The looseness, with the drinking on shift and things like that, it just kind of became part of the fun of work energy,” Monroe said. “We tried to keep it reasonable and safe, but I think at some point I started to realize that there were definitely nights where my stress would get the best of me.”

He’s since instituted a “no drinking” policy after returning from a leave of absence in March.

Conversations about workplace environments are more than timely now that California has fully reopened, as establishments move past mandated Covid-19 health restrictions and a mostly vaccinated workforce returns. 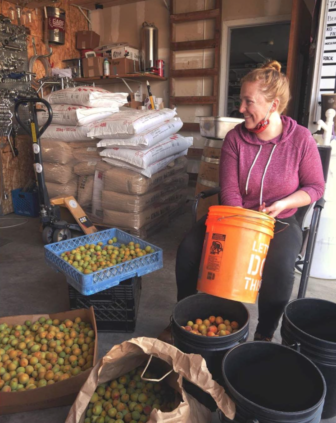 Wendy Neff, co-founder of Fox Tale Fermentation, launched the project in San Jose with her partner Felipe Bravo to bring a new environment to the craft beer community. Photo courtesy of Neff.

Most of the accusations against Summers—posted anonymously through Instagram—detail the now-former restaurateur approaching his female staff intoxicated and enticing them to drink.

That’s one reason why Wendy Neff, a chef and brewer in San Jose, thinks the lack of women in leadership roles and gender equity within the craft beer industry needs to change.

Neff and her partner, Felipe Bravo, are launching their own brewery space in San Jose—Fox Tail Fermentation. They’re hoping to cultivate a social environment welcoming to the local craft beer community, intentionally including women and making the industry more gender equitable.

“We’re trying to level the playing field, working to make sure women are heard, seen, are valued or respected—that's something that just absolutely has to happen,” Neff said. “Abuse happens from the top down.”

According to a 2014 study by Auburn University, women account for 29% of all brewery workers across the United States; Stanford University found only 4% are head brewers. Female representation in the “non-production, non-service” staff roles jumped to 37% by 2019, according to a Brewers Association survey, but the segment that employed the most women remained service staff, accounting for 54%.

“We’re moving into a time where we need to create a very equal and respectable place to work,” Neff explained, “(where) people want to be there and actually want to do well.”

While Monroe’s moment of accountability didn’t involve accusations of assault or misogyny, he said he recognized how a culture controlled mostly by white males could breed a toxic environment where such behavior could go unnoticed.

“Ultimately, (the letter) was just me being accountable, as a manager—a male manager in this industry and just being very clear about how I’ve changed,” he said.

He said two years of therapy and work in different management positions during his hiatus from Original Gravity crafted and improved his role as general manager. Monroe wrote in his apology letter that he’s since attempted to prioritize communication and care, detailed in a letter posted to his personal Instagram page.

Sean Carino, a former line cook who worked at Original Gravity in 2018 and 2019, said Monroe struggled with drinking on shift, as did other employees, but he’s happy to see his former manager acknowledge his past and pledge to do better.

Monroe has insight into the toxic masculinity culture that perpetuates in the industry, Carino said, and he’s glad to see his old manager open up publicly about it.

“He’s a great person. He wanted to drink as a more broader social thing, but it got uncomfortable,” he said. “But I think now he has a new perspective, a new set of eyes to come at managing from a different angle to hopefully make the work environment better.”

Neff said she might sound cliché, but representation is everything to a worker looking for someone in leadership they could relate to—whether working behind the bar or behind the scenes operating a beer fermenter.

“The goal is to not have a hierarchical structure where (an employee) feels they can’t speak up about an issue,” Neff said. “I want to make sure there's never that intimidation factor for anyone speaking out against their manager if they’re being abusive.”