As tenants of the historic Morse Mansion—one of the few Queen Anne Victorians left in Santa Clara and the only one in the city listed on the National Register of Historic Places—members of the Kappa Alpha Theta sorority are more than a little guarded about who’s on or around the property.

So it raised some alarm when one sorority sister watched a middle-aged man traipse over and proceed to dump what looked like “electronics and documents and stuff like that” into the mansion’s big green trash bin.

The Santa Clara University student who witnessed the incident last month snapped a photo of the trash-tossing scofflaw to share with fellow sorority sisters and one of the Old Quad neighbors, who recognized the uninvited guest as none other than accused sexual harasser Dominic Caserta.

“It weirded them out,” a source familiar with the situation tells Fly. “And I can see why: The man did not look well.”

The Old Quad neighbor advised the sorority sister to lodge a complaint with the city to report the potentially illegal dumping by one of the city’s former elected leaders.

According to records obtained by Fly, she obliged.

Caserta—a councilman and aspiring Santa Clara County supervisor whose political career was derailed in May of 2018 by revelations of his allegedly longstanding history of sexual harassment and bullying—has laid low for the better part of this past year while ostensibly plotting litigation and, as of earlier this month, dealing with his divorce.

Well, really, it sounds like his wife’s been the one dealing with the marriage dissolution. In an impassioned phone call Wednesday, Caserta denied any marital troubles.

“I am not getting divorced,” he repeatedly insisted.

“My wife and I are married,” he added, echoing text messages he’s lately been sending to former political operatives who worked on his 2018 supervisorial campaign. (“I am still standing,” he told one consultant in a text earlier this month, “and I will always have my son, wife and a record of leadership for working families ... And call me an asshole to my face and I will be there you loser!”)

“I have not been served anything,” he claimed. “Nothing.”

Fly’s been hearing about more Caserta sightings around his abode, which happens to lie kitty corner from the sorority house. That positioning must be awkward for Kappa Alpha Theta, considering how no small number of the high school girls he taught over the years have accused him of unwanted touching, hugging, hair-stroking and chest-ogling.

Caserta’s coed neighbors would be well advised to lock the dumpster and draw the blinds.

This article has been updated to include a statement from Caserta. 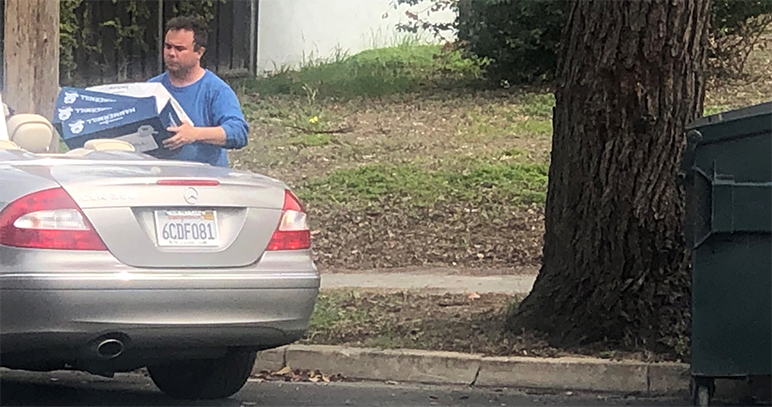