Beau Goldie’s long kiss goodbye just won’t end. The former CEO of the Santa Clara Valley Water District, which provides drinking water to 1.9 million people, retired under semi-duress in January (he received a six-figure severance check) after actions he took on multi-million dollar projects started getting increased scrutiny. A week after he called it a career, district employees were stunned to find him still coming in to work to kick it by the water cooler and talk shop—for three days straight. Execs told Goldie to knock it off and go home and everyone thought that was the end. But what about a retirement party?! The 31-year district employee is scheduled to have a swank send-off March 24 at Cinnabar Hills Golf Club, and he apparently still has district staffers organizing the shindig. An invitation forwarded to Fly notes that attendees should send $60 to Goldie’s former admin, Sylvia van Diemen, and mail it to the Water District’s address. If people have questions, they’re directed to call van Diemen while she’s working on the taxpayer’s dime. In a phone call, van Diemen insisted that Goldie paid for the invitations, stamps, envelopes and labels, and district spokesman Marty Grimes suggested any public funds being used were de minimis. Holding a party at a water-guzzling golf course during a drought, however, is about as tone deaf as it gets for a former water district CEO. Grimes pointed out that Cinnabar was named a “Water Saving Hero” by the district and has taken noteworthy steps to curb its water consumption by more than 30 percent, so yeah. Meanwhile, the district board appointed Norma Camacho to the interim CEO position Tuesday night, selecting the chief financial officer over executive colleagues Jim Fiedler and Jesus Nava, the latter of whom has been part of Beau’s informal party planning committee along with board clerk Michele King. When Fly asked van Diemen if it could attend the party, she laughed and said our name wasn’t on the list. 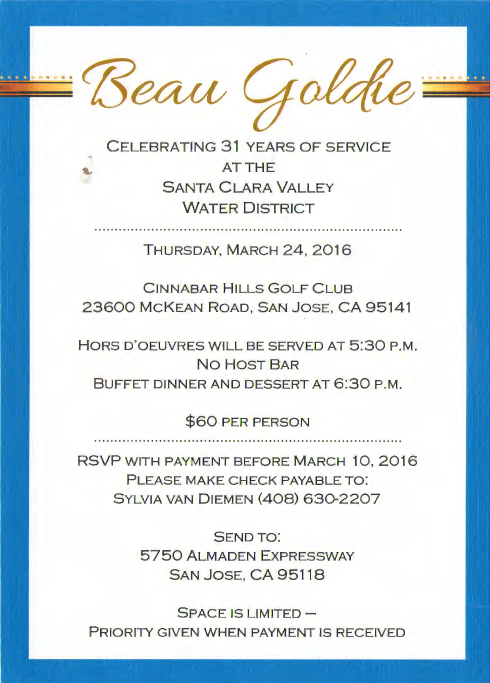