The Mercury News will return to downtown San Jose, the newspaper announced Thursday in a deliciously meta article of self-praise.

Veteran reporter Pete Carey—a Pulitzer-prize winning local media legend—was given the unfortunate task of rounding up a swath of city leaders to celebrate the paper's relocation to 4 N. Second St.

"It's great to have the Mercury News back downtown where it started," Mayor Chuck Reed told the newspaper. "It was an anchor presence for a very long time and it was a blow to downtown when they picked up and moved off Santa Clara Street to Brokaw Road." Reed would have to take Tom McEnery’s word on that, since he was 19 and in the U.S. Air Force Academy at the time.

But he wasn't finished. Reed also told the Mercury News, "It's important to have one of the nation's best newspapers downtown."

What a gem of a quote.  The mayor arguably owes a sizable debt to the paper's consistent backing of his administration, and his brother-in-law, Bob Ingle, was the newspaper’s longtime executive editor.

But none of the adulation (or excuses) should be the real takeaway from this story.

The real story is how Councilman Sam Liccardo—endorsed by the Merc to succeed Reed—helped the paper secure an $864,000 discount on parking. The deal makes 160 of the company's 200 parking spaces free for the next four years and half-off the fifth year.

That's a damn good deal. Not on the level of Twitter, but good.

Liccardo launched the parking incentive a few years ago to lure more business to downtown. And it's working. But the deal offered to the Merc went above and beyond offers extended to other businesses, which is why it required City Council approval.

As an example of how far local leaders bent over backwards, San Jose Inside's parent company, Metro, admittedly one of the greatest news weeklies in all the South Bay, recently invested in a building downtown. To use the daily's preferred parlance, this newspaper is in the final stages of moving to 380 S. First Street. Metro has been a 29-year mainstay in downtown and its new office is about 12 percent the size of the 33,186 square feet the Merc will occupy at its two floors of space at Legacy Civic Towers. 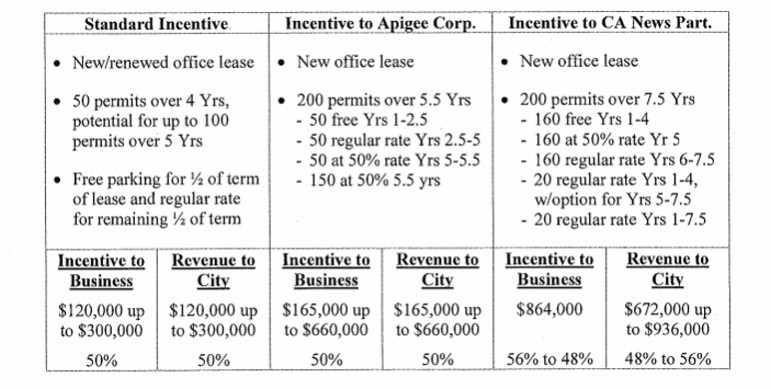 This is a side-by-side comparison of the standard deal for parking and what the Mercury News (far right) is getting.

Metro did not receive a special vote from the council to receive a greater discount than other downtown businesses. Rather, Metro was given a more standard deal through the parking program—two years of free parking for 25 employees and years three and four are half price, according to company ownership that said it was too busy to go on the record.

Andrew Boone, director of nonprofit I Walk, I Bike, I Vote, calls the Merc's parking deal bad for the city, but not because it's a potential conflict of interest for a newspaper to praise itself while getting nearly a million dollar discount on parking from the same people it's supposed to monitor. No, Boone's concerned that the parking spots actually disincentives a move toward sustainability.

"San Jose shouldn't be trying to attract businesses downtown by making it cheaper to drive there, but by improving conditions for walking, bicycling, and transit so that residents don't need to drive downtown to get to work," he said.

Silicon Valley Business Journal reporter Nate Donato-Weinstein first broke the story of the Merc's move in February. In an article today, he notes a trend amongst media companies cashing in on their land holdings. The asking price for the Merc's old digs off of Brokaw Road, Donato-Weinstein says, is $1.95 a square foot.

The newspaper started in downtown but moved to north San Jose in 1967 to expand operations and add several new printing presses. Much of the 320,000-square-foot site has been unused over the years after layoffs and production moved to the East Bay as parent company Bay Area News Group (BANG) consolidated papers.

“We wound up with a facility here that is much larger than we need,” BANG Publisher Mac Tully told San Jose Inside in April. The company had plenty of room in its back parking lot to round up, store and recycle its competitors’ newsracks until it was caught red-handed in 2012.

The newspaper should now be a much leaner operation, and having the lone daily newspaper located downtown is certainly a good thing. But having Liccardo quoted in a story about the newspaper itself, saying there's "a lot to celebrate," when he's been complimented in a bevy of stories that have nothing to do with the mayor's race, it all just comes off a bit incestuous.

So, in closing, welcome back Mercury News. Let's try to keep it cool. Real cool.