A recent political mailer by the California Association of Realtors supporting Matt Mahan quoted a 2013 San Jose Inside article in which Cindy Chavez “was called before the grand jury three times and answered ‘I don’t know,’ ‘I don’t recall’ or ‘I don’t remember’ more than 75 times in response to questions about what she knew about the trash pact.”

District Attorney Jeff Rosen, in text message blasts this month sent out by the Chavez for Mayor campaign,  says “Cindy testified truthfully as a witness in a grand jury proceeding 18 years ago. After careful review, a respected Judge dismissed this as being politics.”

Rosen’s characterization of the case as “politics” doesn’t quite summarize the events. The case against Mayor Ron Gonzales was brought by respected long-term district attorney George Kennedy—who endorsed Rosen and helped Rosen unseat incumbent district attorney Dolores Carr. The case against Gonzales was dismissed by Judge John Herlihy on a technicality—the prosecution’s instructional errors to the jury.

Carr opted not to re-file the charges, which alleged that Mayor Gonzales was bribed with political support by the Teamsters when he cut a backroom deal to switch San Jose’s garbage contract to a higher priced union. The mayor then lied about it to the city council and the public, which wound up paying $11 million more in residential trash collection prices.

By misleading the council, Gonzales had engaged in a “conspiracy to cheat and defraud” the council and the public. Chavez was a close ally of the mayor, and had signed a key memo on the garbage hike.

Rosen challenged and defeated the scandal-plagued Carr, who despite being a Republican, was a close ally of Chavez. The labor union executive had made an impassioned plea to the South Bay Labor Council not to endorse Rosen. Over the past decade, however, Chavez and Rosen have since become allies and endorsed one another’s campaigns, and Rosen is now one of the most visible champions of her campaign, vouching for the truthfulness of Chavez’s sworn testimony (even though he was not involved in the case and prosecuting homicides at the time).

Chavez was never charged with any crimes, but her testimony was seen as evasive. Given her life’s work with organized labor, it was hard to fathom that the vice mayor knew so little about the union swap. Voters subsequently rejected Chavez’s 2006 bid to become mayor of San Jose.

In a political advertisement in Sunday’s Mercury News, Rosen said “Cindy did nothing wrong” and called the pieces citing Chavez’s grand jury testimony “vile accusations” that “are just not true.”

We went back over the transcripts and found that Chavez indeed provided 75 variations of not recalling or remembering key details. Lawyers often coach clients to use those phrases to sidestep a question, particularly if the witness has less than 100% certainty about the answer.

In the transcript, Chavez has a clear command of many minute details in answering some of the questions. At other times she cannot remember when or if a conversation occurred.

Here’s the first part of Chavez’s testimony for those who want to go back and read it for themselves. We added yellow highlights to the first part to make it easier to find the answers to questions for which she didn’t have the answers. 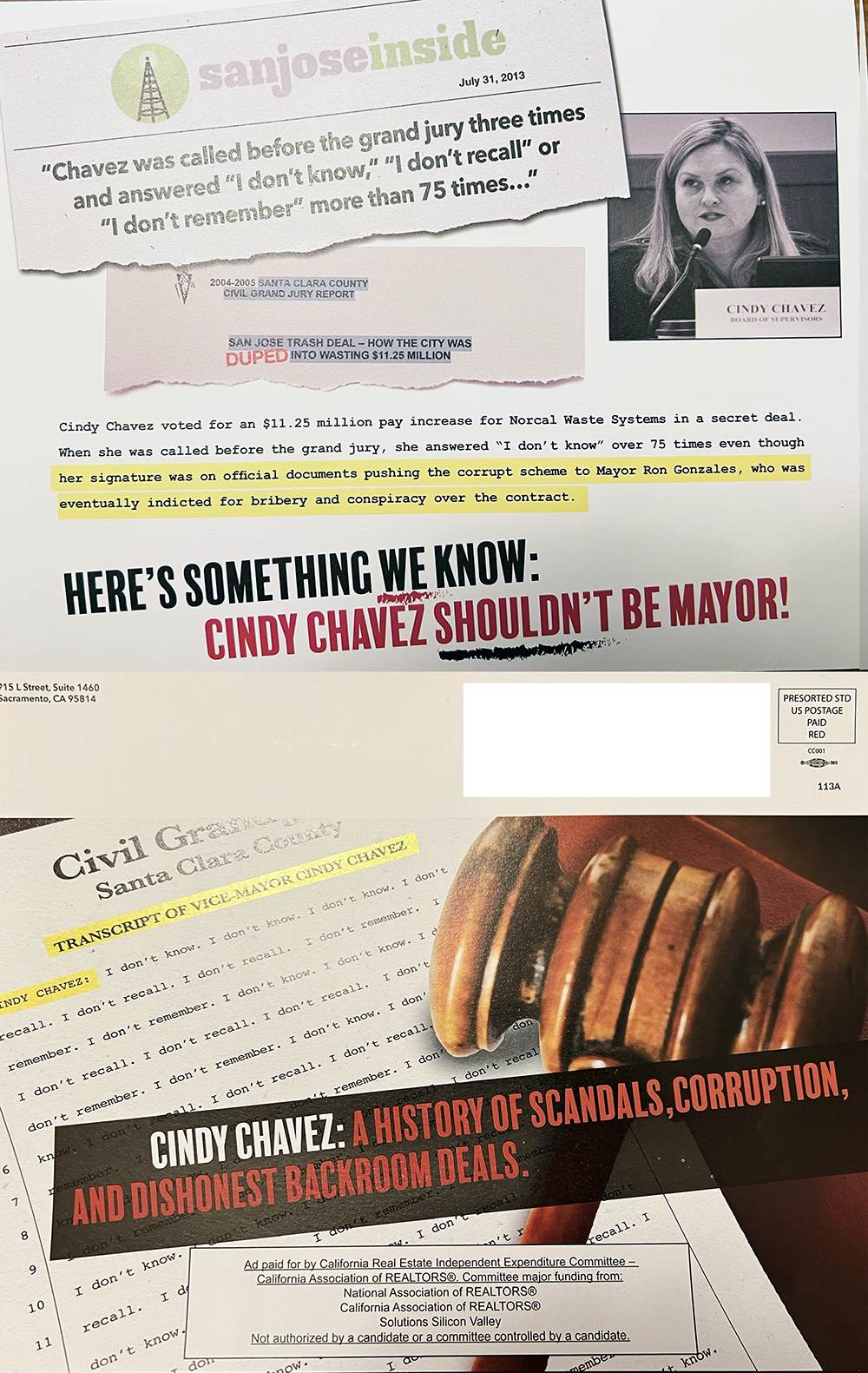 A pro-Chavez mailer sent out by the California Association of Realtors.

This article was updated to provide the second part of the testimony, additional graphics and additional information at 12:40pm on Oct. 31.