And then there were three.

The group behind a worldwide competition for ideas on a new iconic landmark in San Jose on Friday unveiled the lucky few out of 963 submissions that made the final cut for consideration during a virtual fundraising event.

The designs, meant to represent the innovation of Silicon Valley and to attract tourists to the region, will move onto the second phase of the contest. Each will receive a stipend to flesh out their ideas and one will be chosen to rise in Arena Green, the city-owned park across the street from the SAP Center in downtown San Jose. 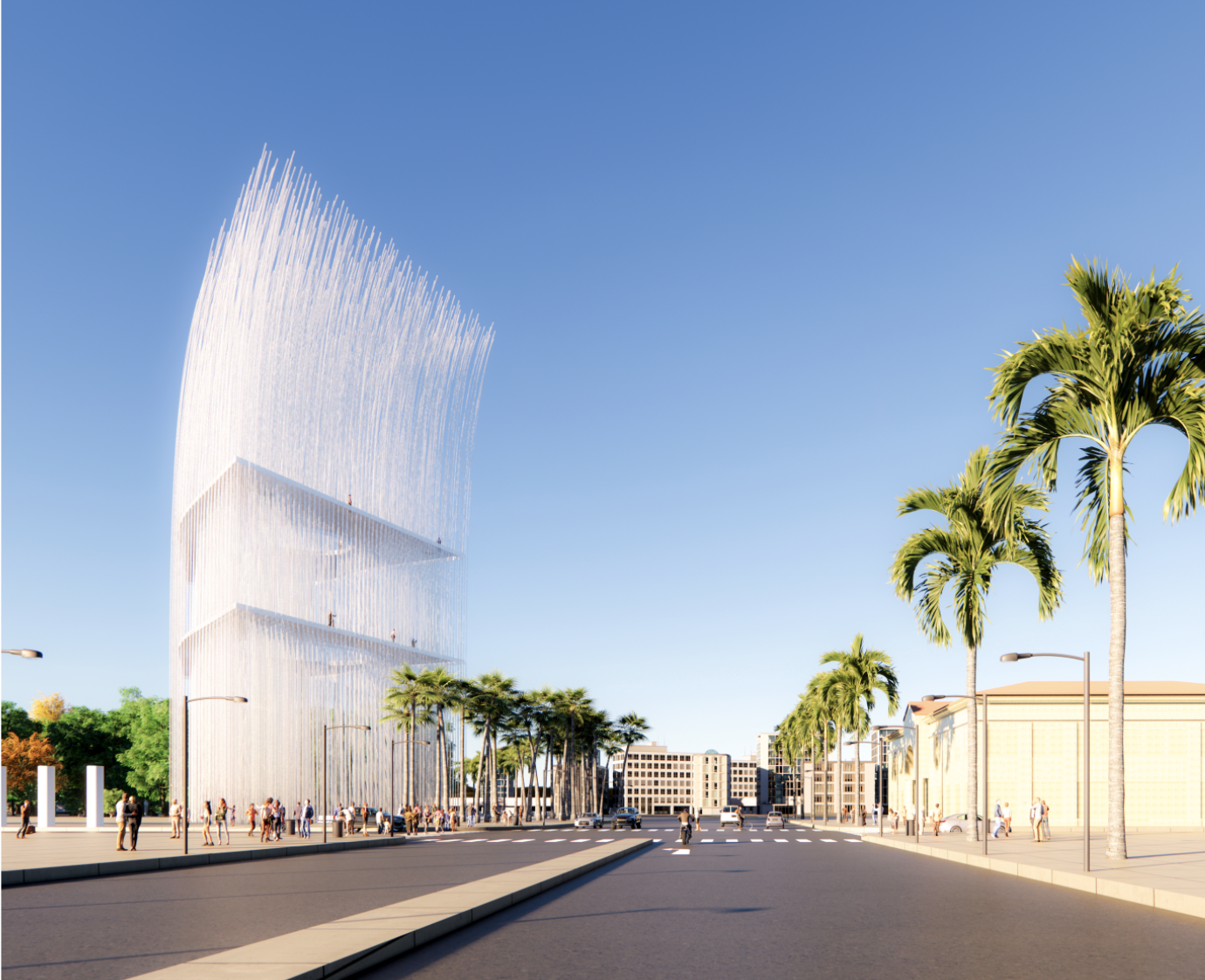 Breeze of Innovation, one of the three finalists in the Urban Confluence Silicon Valley contest.

Breeze of Innovation aims to turn hundreds of 200-foot-high waving rods into power-generating, paint-brush-like metaphors for the tech companies that gave Silicon Valley its reputation. Visitors would be able to go inside the glassy, multi-level structure, which would have a hollowed center. 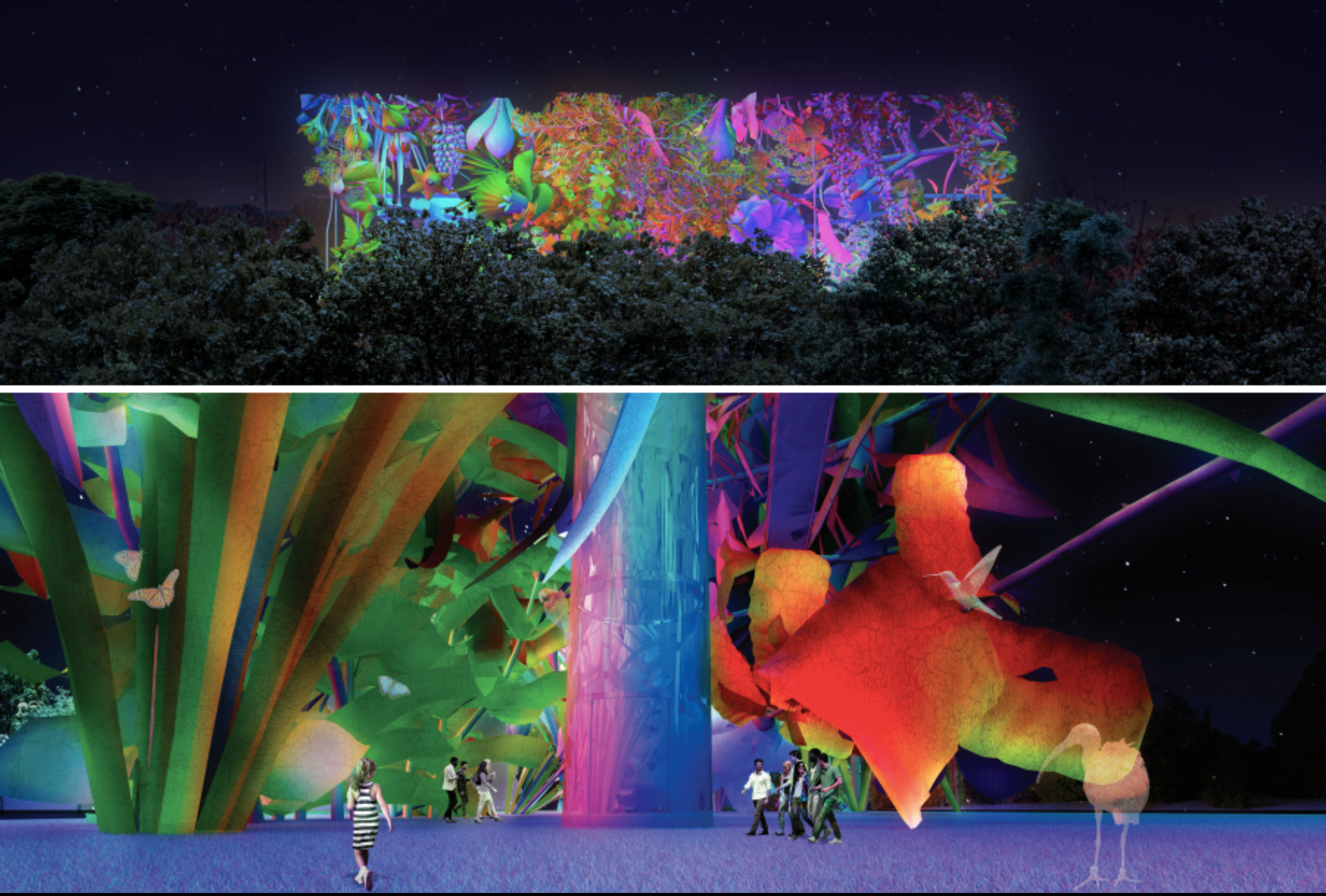 Welcome to Wonderland, one of the finalists in the Urban Confluence Silicon Valley contest.

Welcome to Wonderland brings a bit of whimsy to the contest with enormous flowers and other flora inspired—as the name suggests—by the classic children's story, Alice in Wonderland. Visitors would be able to walk through the multiple levels of the 200-foot structure on a glass floor, meant to make everyone feel like they're flying through their own wonderland. 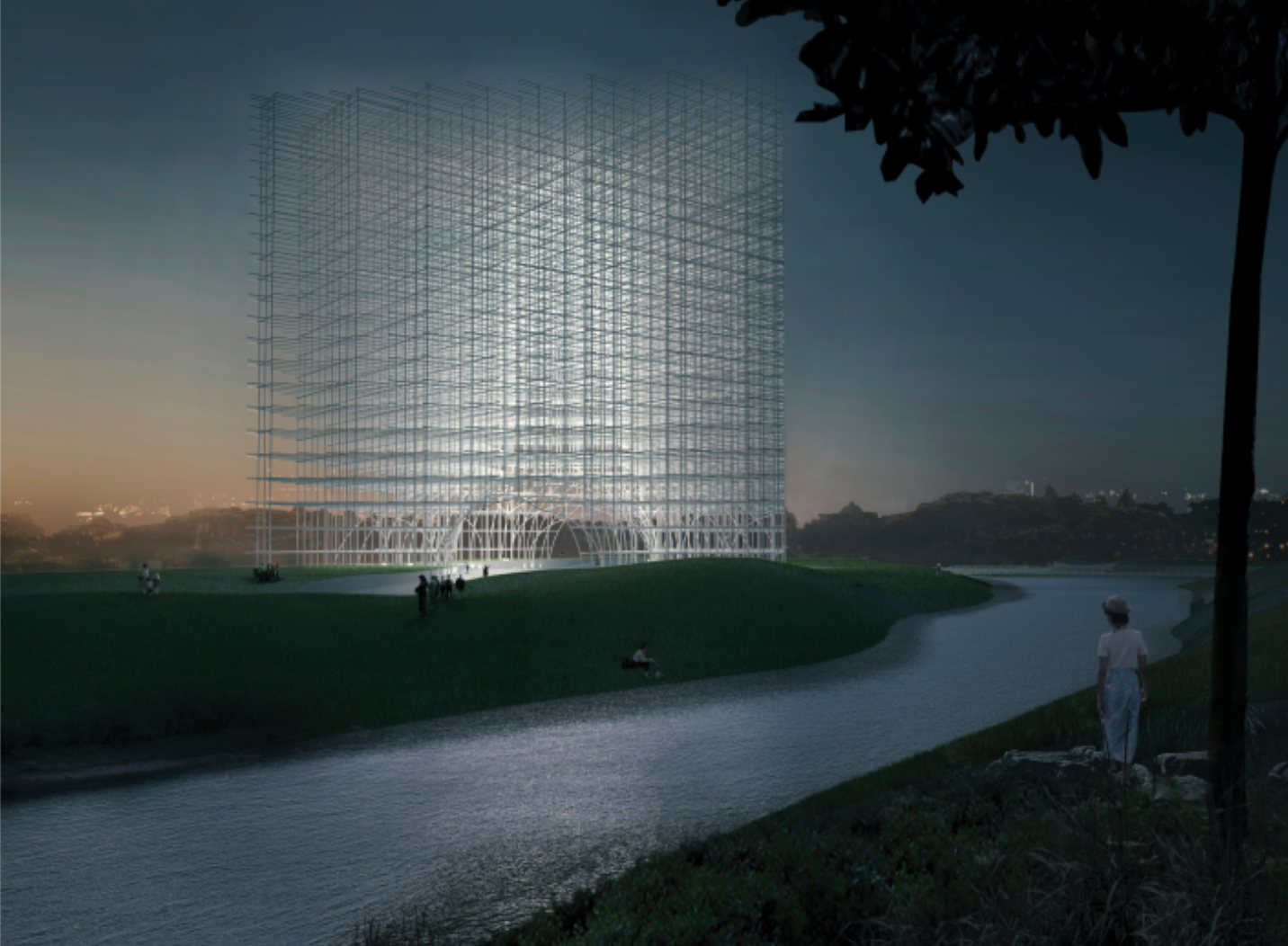 Nebula Tower, one of the finalists in the Urban Confluence Silicon Valley competition.

Nebula Tower isn't a light tower, but it could be. the grid-like structure plays around with light so the shape an onlooker makes out from a distance can be any number of structures. The center is hollowed out and visitors can walk around and peer through the grid to the sky.

"The Nebula Tower is hence vast yet light, precisely formed yet ephemeral, like a nebular cloud with vacuum inside," the proposal says. "During the daytime, the equivocal form of the grid and the nebulous figure of the tower offers changing images with the shift of spectating perspective. At night, light is superimposed."

San Francisco has the Golden Gate Bridge, New York has the Statue of Liberty, Seattle has the Space Needle, St. Louis has the Gateway Arch. Soon, San Jose and Silicon Valley will have its own icon that springs to mind when the region comes up—that is, when it gets funding.

The team behind the contest—the San Jose Light Tower Corp.—encouraged residents to donate to the cause, aiming to raise $1 million to fund the initiative for the next year. By the end of the broadcast announcing the winners, the group had met their initial goal, but encouraged supporters to continue to donate.

That funding will go to three $150,000 stipends to the finalists, for operating costs for SJLTC and help with other capital costs. The winner will be announced in 2021. The group hopes to get approval for the project from San Jose councilmembers next year.

“I've spent my whole life building big things, think about this at the confluence of two urban rivers lies the site of the world's next iconic landmark,” Jon Ball, founding director and chairman of the SJLTC, said Friday. “But it won't build itself. It will take a community coming together to make it happen, and we do need your help.”

A 14-member jury comprised of local, national, and international experts convened last month to review the submissions and whittle the finalists to just three.

“When you think about projects like Urban Confluence, what you think about is the hope,” Cindy Chavez, president of the Santa Clara County Board of Supervisors said in a video during the event. “They're bringing together people to imagine and dream, what the future will look like, and really thinking a lot about the importance of Santa Clara County being such a diverse part of the entire country.”

The idea for the effort was inspired by the city’s Electric Light Tower that stood in the city between 1881 and 1915. But the SJLTC decided early on that another light tower was not in the city’s future.

Instead, the organization asked artists to send them visions for an “iconic world-class destination landmark for Silicon Valley.”

“It will be an impressive and recognizable symbolic structure appropriate for the unique Silicon Valley region that is internationally respected and recognized as the world-wide center of innovation and will become the architectural and artistic legacy of the current generation of leaders in San Jose and Silicon Valley,” the group said in its mission statement and pitch to the world as it launched the contest.

“You know, San Jose and Silicon Valley won't go away because of a pandemic, we're not going to fail because of one severe economic recession, but we will die when we fail to look to the future,” Liccardo said. “This is our opportunity to look to the future amid all the severe challenges we face in this moment. We have an opportunity to bring a community together to create a brand for ourselves that reflects our genuine identity.”

Watch a recording of the virtual announcement here.