The board of supervisors voted 3-2 on Tuesday to advance a variation of the Yellow Map, known as draft 90195, introduced by Supervisor Cindy Chavez. 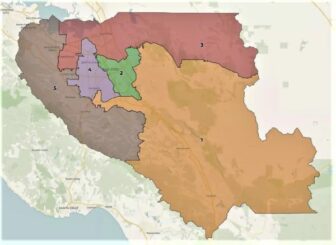 The Yellow Map was advanced by a coalition of local civil rights and labor groups.

The endorsed map also has a deviation of 4.1 percent, which means it has relatively the same amount of people living in each of the county's five districts.

Like all maps before the board, it splits San Jose into each of the five districts because of its high population and large city limits.

The Yellow Map, previously known as the Unity Map, had gone through several variations. At the Dec. 8 board meeting, supervisors considered nine different maps.

Supervisors Otto Lee, Susan Ellenberg and Chavez voted in favor of the 90195 Map. Supervisors Joe Simitian and Mike Wassermann voted against it.

The map has prompted legal questions from opponents because it would exclude two District 1 candidates from running in that district - former San Jose city councilmember Johnny Khamis who represented the Almaden area and Los Gatos Vice Mayor Rob Rennie.

They argued that Chavez should have been barred from voting on the maps because of alleged conflicts of interest, citing her participation in a fundraiser for District 1 candidate Rich Constantine, mayor of Morgan Hill. They also pointed to her previous employment with the South Bay Labor Council and Working Partnerships USA, which had participated in creating the Yellow Map.

Chavez told supervisors the 90195 Map was an improvement of the Yellow Map because it reduces population imbalance in districts, provides better representation to historically marginalized communities in county politics and keeps district boundaries compact and clear.

The map unites the Evergreen area in southeast San Jose, doesn't split the Willow Glen neighborhood and uses the Capitol Expressway and the Guadalupe Expressway as natural district boundaries.

Wassermann, who is not seeking reelection in District 1, instead advocated for the EE 2.0 Map, which was discarded at the November meeting. He continued to argue that it was worthy of consideration because it had the lowest deviation of any of the maps at 1.2 percent. The state guideline is 10 percent.

The county will post the final map by Dec. 10 to give the public three days to review the map before it is formally adopted on Dec. 14.

Supervisors directed county surveyors to prepare a description of the revised supervisorial boundaries and expect to vote Dec. 14 on a redistricting resolution.

Jana Kadah is a reporter with Bay City News.