Fire investigators and police examining a severely damaged  Jewish synagogue have concluded that the Dec. 22 fire, while of suspicious origin, was not a hate crime.

"Our investigation determined that this was NOT a hate incident or racially motivated,"  San Jose police said in a statement on Twitter.

“Our synagogue went up in flames this morning,” Rabbi Mendel Weinfeld said in a Dec. 22 post on the Facebook page of The Chabad House, 1088 Branham Lane, San Jose.

“Someone lit a fire in the carport area that took over the entire building,” he wrote. “They are still investigating if there were any ulterior motives.”

Weinfeld reportedly shared security footage with investigators that showed the origins of the fire at the Almaden Valley synagogue. 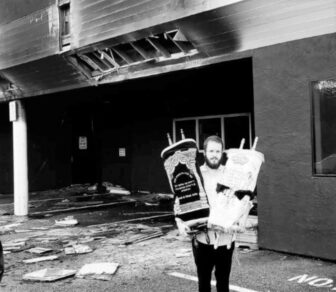 “Thank G-d everyone is safe,” Weinfeld wrote, saying that the congregation’s sacred

Torah scrolls and some other holy books were recovered.

“We are all in shock and devastated at the disaster but we are also optimistic about rebuilding our Jewish community center bigger and greater!” he said.

The member of the congregation, part of the Chabt-Lubavitch Hasidic movement of orthdox Judaism, started a GoFundMe account to help the community rebuild its place of worship, at. As of the morning of Dec. 23, the fund had raised $36,717 of a $250,000 goal. 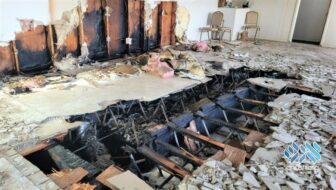 Anash.org, an English-language website for the associated Shluchim and Anash worldwide communities, reported that the Chabad House was “destroyed by a fire.”

Pictures taken after the fire by congregants and published on social media and on anash.org show “extensive damage to both floors of the building, which had housed a shul and a Hebrew school, led by shluchim Rabbi Mendel and Mussie Weinfeld.”

Maryann Barsky, a member of the religious community, started the fundraising campaign to help rebuild the Chabad House.

“We ask the community to come together with love, support and togetherness to help rebuild Chabad,” she wrote. “In the shadow of the fire, and amongst the ashes, a light of unity will shine brighter and much longer than the fire of destruction.”