They called him a “suicide bomber, “Bin Laden,” a member of ISIS. They mocked his accent and joked about him plotting to crash a plane into the White House.

During firearm trainings, the range master facetiously goaded him to “shoot the infidels.”

But the breaking point for SJPD Officer Nabil Haidar, after a decade-and-a-half of alleged harassment, came on Nov. 10, 2017.

At a briefing with about 70 colleagues and 15 upper-command staff, Capt. Johnson Fong had just commended all ex-military members in the room in honor of Veterans Day when, in Haidar’s telling, Sgt. Robert LaBarbera tried to lighten the mood. “Captain you forgot to mention Nabil,” the briefing sergeant allegedly said. “He is an ISIS veteran.”

The room erupted in laughter. It was the same tired joke—only this time in front of a sizable audience and a good share of the top brass.

Haidar—a Lebanese immigrant with relatives killed in his homeland’s civil war—says he confronted LaBarbera after the meeting, warning how his comments posed a liability. “You’re nobody, pal,” the sergeant allegedly said. “You’re not a protected class.”

When Deputy Chief Anthony Mata heard what happened, he, too, reportedly found it hilarious. At a table across from Haidar and where several of his colleagues were eating lunch, he even doubled down on the jape.

Drawn by the laughter, Haidar says Sgt. Ronnie Lopez joined the group and asked what everyone was cracking up about. Upon hearing about LaBarbera’s quip, according to Haidar, Lopez piled on. In an exaggerated imitation of a Middle Eastern accent, he allegedly scoffed: “Yeah, I sleep with your wife or a kill your wife.”

Though SJPD Chief Eddie Garcia launched an Internal Affairs investigation into the matter, Haidar says it resulted in no closure, no apology. A letter about the conclusion of the case wasn’t produced until nearly a year-and-a-half later. 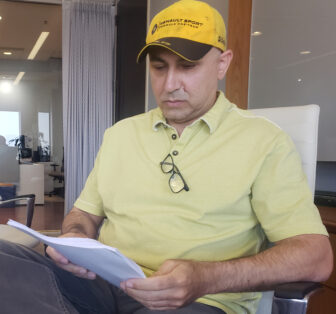 When Haidar came forward with the allegations in 2017, the San Jose Police Officers’ Association (POA) defended the accused officers. When he sued SJPD in 2018 for Islamophobic harassment, Chief Garcia denied claims of systemic discrimination.

Recent events, however, give the case new resonance.

On June 26, in response to an anonymous whistleblower and San Jose Inside’s reporting exposing bigoted, anti-Muslim comments SJPD cops made on Facebook, Garcia roundly condemned the statements and announced their immediate suspension. “Any current employee involved with bigoted activity online will promptly be investigated and held accountable to the fullest extent in my power,” he vowed. “We have no place for this.”

As did POA President Sgt. Paul Kelly, who denounced the “online ring of hate,” said he’d do nothing to defend officers charged by the department and declared “zero room in our department or our profession for racists, bigots or those [who] enable them.”

In an email to the union’s 1,000-plus members a day or so later, he added: “We must all self-reflect. We must all look in our souls and confront the demons of racism, bias and hate that permeates our society. The first step in our self-reflection is to admit we have a problem. For far too long, we have been afraid of admitting, confronting and doing something about racism, bias and hate within law enforcement. If you have these types of beliefs in your heart, fix it, address it, seek counseling, seek mentoring, seek training to understand bias and racism, talk to a pastor, priest, rabbi or imam, and if you can’t get that hate out of your heart, then I suggest you go to Chief Garcia and turn in your badge.”

Haidar says he’s thrilled to see SJPD proclaim zero tolerance for bigotry. He just wishes the department held the accused in his case to the same standard. “If my situation were handled decisively and Chief Garcia took swift action,” Haidar says, “then I don’t think those other officers would have felt comfortable making those comments on Facebook.”

Instead, Haidar says SJPD chose to minimize him claims by first ignoring them, then attacking his reputation (leaking a conduct-unbecoming-of-an-officer claim for which he was disciplined years ago) and, ultimately, fighting his lawsuit.

As Haidar recalls, Capt. Fong’s face turned bright red from laughing so hard at the ISIS joke. When Fong in 2017 interviewed for the top cop job at the San Jose State University Police Department, the hiring committee asked him about Haidar’s claims. The captain described the offending remarks as “a joke” that “everyone laughed about.”

Not everyone. Certainly not Haidar.

“The mayor, the head of the POA and the chief are all saying appropriate things right now,” his civil rights attorney, Randall Strauss, says from the sunlit conference room of his 16th floor Oakland office. “But Nabil was the victim of the exact same systemic racism years ago, and they laughed it off.”

For months after Sgt. LaBarbera allegedly made Haidar the butt of an anti-Muslim joke, he says the harassment persisted.

One incident took place on Nov. 27, 2017, during a training module called “Procedural Justice and Police Legitimacy,” which focused on officers’ relationships with various ethnic groups. After class, Haidar says he found himself in an elevator with a fellow officer who made a comment apparently directed at him.

In his lawsuit, Haidar describes how the discrimination became so “persistent and extreme” that he asked the department to exempt him from daily briefings, allowing him to go straight into the field. Even then, he says he couldn’t escape it.

On Jan. 15, 2018, while responding to an active burglary, Haidar says his body camera documented colleagues making yet another Islamophobic jab.

According to Haidar, Officer Thomas Barnard teased him by mimicking an Arabic prayer—saying “alalalalala”—and made explosion sounds to “pretend he was a suicide bomber blowing himself up.” He then allegedly asked Haidar if a knife affixed to his waist was a “f*cking Lebanese throat cutter.”

Another officer who witnessed the exchange reportedly motioned toward Haidar’s body camera, signaling that they were being recorded. Unfazed, Barnard allegedly moved toward the camera, repeated the knife comment and flipped off the wearer.

Off camera, he allegedly continued prodding Haidar, suggesting he could teach recruits “jihadi sh*t” and how to “make pipe bombs.”

Haidar filed an internal complaint about that, too. Nothing came of it except a sustained finding of conduct unbecoming of an officer. Despite SJPD policy requiring Internal Affairs to relay findings to complainants, Haidar says he didn’t even hear about the conclusion of the case until a year after it wrapped up.

Feeling defeated, Haidar asked SJPD to reassign him as a recruiter—a position that came with a huge pay cut, but at least afforded some distance from the harassment.

Chief Garcia’s newly articulated hardline stance against racism within the ranks has given Haidar renewed hope for the profession he joined in 1996 with a passion to serve.

If that’s the standard set by the city’s highest-ranking law enforcement official, he says he’d like the department to revisit his 2017 Internal Affairs complaint, which resulted in no meaningful or apparent accountability.

The investigating officer, Sgt. John Hutchins, interviewed just two people (Paul Cook and Rob Imobersteg, both white lieutenants) about the briefing-room incident despite their being scores of other witnesses.

Rather than pulling Sgt. LaBarbera from the field, as Garcia did with officers involved in the “online ring of hate,” the department would go on to grant him a highly desirable, overtime-lucrative transfer to the Mineta San Jose International Airport.

“I want to ask the POA president, who says to officers in that Facebook group, on that platform that ‘you’ll have due process,’ where was mine?” Haidar says. “I never had a chance to sit and tell my story. He was not there to represent me, the victim, in my case.”

In fact, Haidar adds, Sgt. Kelly personally represented Deputy Chief Mata and Sgt. LaBarbera, sitting in on Internal Affairs interviews with them. (As an aside, the union representing officers as high-ranking as a deputy chief raises serious concerns about potential conflicts of interest).

“The POA defended them, protected them,” Haidar says. “I never got called in by the POA, I never heard them say they would protect me.”

The POA has yet to respond to San Jose Inside’s requests for comment. Officials from SJPD declined to discuss Haidar’s case because of the ongoing litigation. Mayor Liccardo demurred for the same reason, directing San Jose Inside’s queries to City Attorney Rick Doyle (who has previously denied the merits of Haidar’s claims).

“The complaints made by Officer Haidar were fully investigated by the department,” Doyle wrote in an email Tuesday. “Penal Code Section 832.7 precludes us from releasing investigations and discipline. Please note, however, that the department is in the process of investigating the recent information related to the social media site and posts.”

But there’s nothing anyone at the city could say about the lawsuit, he added.

“The city does not comment on pending litigation for a variety of reasons, not the least of which is to afford a fair process for all involved,” Doyle wrote. “Any body cam footage is currently subject to a protective order in state court.”

Haidar says he looks forward to the evidence coming to light. And though Sgt. Kelly hasn’t spoken publicly about his claims since shrugging them off two years ago, Haidar says he hopes the union leader reflects on them in light of the national reckoning over systemic bias in policing.

“The POA president said, in his letter to members about racist and offensive social media posts, that ‘words cannot express my disappointment and the extreme sadness I feel right now,’” Haidar says. “He says, ‘as heavy as my heart is, there are some truths that we must acknowledge’ about this. Well, if that’s the way he feels and he’s a white person and this isn’t directed at him, then how does he think it felt for me?”

Or how it felt for the ones who didn’t laugh along with the jokes.