Illuminated by emergency red and white lights of a fire truck and ambulance helping one of the people living at the SureStay Hotel by Best Western, a dozen other tenants—who are all either disabled, elderly or both—nervously gathered Wednesday to learn about their fate at the complex.

They were just a few of the 2,500 unhoused residents deemed most vulnerable in San Jose, who were moved into SureStay’s 76 rooms near Mineta San Jose International Airport in April 2020, after COVID-19 was found to be most cruel to older individuals and people with underlying medical conditions. The furnished rooms, complete with small kitchen appliances and onsite social services, have helped many not only avoid getting sick with the coronavirus, but also make strides in their own physical and mental health.

Supported by Abode Services, the building was part of Project Roomkey, Gov. Gavin Newsom’s experimental program that has sheltered more than 42,000 unhoused and vulnerable Californians in hotel rooms across the state. Tenants have lived at SureStay for free since it opened, having created a community of personalities and responsibilities, sharing needs like cars, groceries and information at the hotel—one of several in Santa Clara County housing folks.

However, Project Roomkey is now scheduled to end by Sept. 30.

The city of San Jose purchased the structure at 1448 North First St. for around $11 million, despite the termites gnawing through exposed beams seven feet of the ground floor, pipes frequently flooding rooms, and several palm trees chopped down onsite—leaving three-foot stumps sprinkled across on the turf lawn.

Now, city officials have decided to charge residents $627 a month—about 66% of many tenants’ average monthly income from Social Security Insurance—to continue residing there.

The city did not respond to requests for additional comment from San Jose Inside, but city spokesperson Jeff Scott told other local outlets the rate was determined by the state program through which the city purchased the motel, allowing rates up to 30% of the area median income, as opposed to 30% of a qualified tenants’ income. Scott said the city will “reconsider rent amounts within the next six months.”

Folks can remain housed at SureStay until Sept. 30, but many say hotel management has repeatedly pounded on residents’ doors with veiled threats and intimidation.

Prior to the city purchasing the building, Santa Clara County was in charge of operations, combining efforts of staff from the county's Office of Supportive Housing (OSH) and organizations like Abode.

It's uncertain who will be in charge of evicting residents, if need be.

Uncertainty, anxiety, anger, sadness are all palpable in the meantime, especially for folks hoping the city will listen to their pleas to stay.

Tenants gathered outside the SureStay Hotel to learn about the upcoming change from "Permanent Supportive Housing" to "Permanent Affordable Housing." Photo by Katie Lauer

Susan Flores couldn’t stop crying throughout a community meeting Wednesday, tears welling up every time the thought of getting rehoused—again—intruded her mind. She’s called SureStay home since January 2021.

“I don't want to go to a tiny home, because I’ve heard a lot of bad stuff,” Flores says, adding that she won’t go anywhere without her 11-year-old dog, Bubba. “I’m going to stand up and say I’m not doing it. They’re going to have to drag me by my hair.”

She’s been offered space by the county's OSH staff in a tiny home in East San Jose. It's not clear if she has a choice in the manner, but she's considering staying put at SureStay if she can, since this new housing option is worse—in every way.

Flores doesn’t drive and uses a walker because her legs don’t work too well. Sometimes standing is painful, so the idea of having to walk to the nearest store several miles away is a frightening one. She also deals with severe asthma, heart failure, COPD and diabetes, on top of discomfort in small spaces. 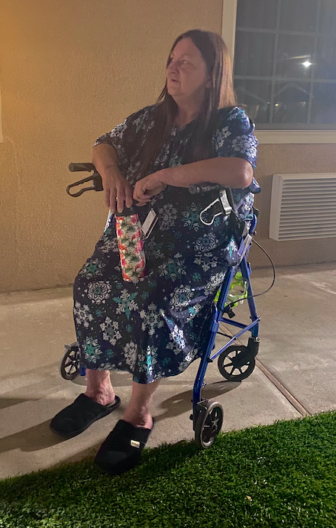 These are common concerns residents have with the other housing options they've been given. Whether tiny homes in East San Jose or other traditional shelters, those places often have little to no access to public transit, are miles away from resources like stores, are too small for walkers and wheelchairs and have fewer amenities than hotel rooms, such as personal bathrooms.

“[The city] is doing what’s convenient for them,” Flores says. “If it’s an inconvenience for me, they don’t care. I feel like they think they can just push me around.”

First brought to SureStay as one of the most fragile people living unhoused in the area, she’s now being evicted and leave a majority of her things—the only belongings left after the hotel’s pipes burst, her room flooded and hotel staff discarded items like a Nintendo game, nail salon kit, leashes, a dog bed and comforters—notably, all items of personality and comfort.

“I don’t ask a lot of questions, I usually go with the flow,” Flores says, “but now I know I can stand my ground because we’re all standing up together—there’s strength in numbers.”

Feeling utterly drained from everything, Flores returned to her room Wednesday evening to join Bubba and watch a movie to escape the stress.

Housing advocates learned only last week that the city was creating a brand new category of housing at SureStay—transitioning from “permanent supportive housing” to “permanent affordable housing”—that charges more than the standard 30% of tenants’ income, which is the rent for a room at places like Second Street Studios and Villas on the Park.

Raymond J. Ramsey, co-founder and president of the Second Street Tenant Association, argues that even unhoused people who can “afford” those higher rents are often left with little money for food and other basic necessities; he says the fear of returning to the streets may stretch residents beyond their means—likely setting themselves up for failure.

Advocate Shaunn Cartwright is flabbergasted and furious, saying information about the new rent rates was never shared in biweekly meetings with staff from the Housing Department, despite repeated requests for an explanation.

Because a majority of the residents are seniors, incomes are often limited through inabilities to work and minimal social security, on top of medical expenses. Cartwright says the change supports people who make more money, creating a case of the haves and have-nots within the unhoused community. The increase is also antithetical to the state of the building, compared to newly constructed yet cheaper housing complexes.

Doing the math between 30% of incomes and the newly proposed amount, Cartwright estimates the Housing Department could waive rents for the 10 folks who want to remain at SureStay by securing a $50,000 revenue stream to cover the gap.

Rachel VanderVeen, deputy director of San Jose’s Housing Department, wrote in a Sept. 22 email that SureStay was not only assessed as “safe and healthy,” but also offered a way to “fill a gap” in homeless residents who are scored as less vulnerable in the city’s Homeless Management Information System.

When tenants and advocates asked city staff on Friday why the rates couldn't be lowered, VanderVeen could not come up with any justification other than the decision had already been made to charge $627.

Now, anyone who can’t pay up has to get out. 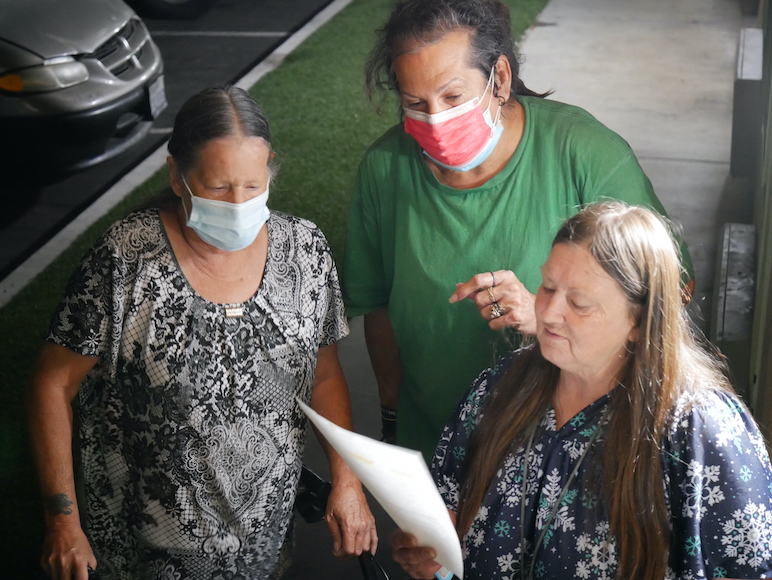 Only 19 of the 73 current tenants could pay the rent hike when the “permanent affordable housing” model was first announced, the city said, and now only 10 are fighting to stay; only 83 people living across five different shelter-in-place motels could afford that cost.

According to city emails obtained by San Jose Inside, 32 others were enrolled in rapid rehousing, four enrolled in permanent supportive housing, two independently found housing, one left due to behavioral issues and one tenant died. Additionally, 14 received assistance through "Housing Problem Solving," but no advocates understood what exactly that service means.

Cheryl Fleming got a room at SureStay after calling a hotline advertised in the news for at-risk people in need of shelter. Dealing with heart failure, COPD, asthma and diabetes, she’s happy to have to have a room while on the waiting list for a new permanent supportive housing complex for seniors being built on Fourth and Younger.

But if SureStay evicts everyone, the 65-year-old doesn’t know what she’ll do until then, and other options the city suggests are too high for the $974 she gets each month from social security. Fleming says she always worked, but that’s not an option anymore, since she can’t stand for long after medical malpractice broke her spine.

“With what we’ve had to put up with here, you don’t put up with that anywhere else you rent,” she says, referring to a rule about monthly room inspections the building’s management recently created. “We don’t have any rights.”

She already feels pressured to leave through the last minute changes in paperwork contracts and verbal commands, even getting written up for cussing. Despite caring for the people at SureStay and getting along with Abode staff, she can’t get over how the city “came in like gangbusters.”

“I don’t like the way they abruptly do everything—acting like they’re always right, we’re always wrong and we’re just homeless people so we have to accept it,” she says. “I’ve grown up tough living on the streets, so I know how to make sure people don’t hurt me. This is a fight that I’ve never really known—it really irks me to the bone.”