On the day Donald Trump took the oath of office and lamented in his address the nation’s rusted-out factories and crime-plagued inner cities, protesters took to the streets of San Jose to denounce the 45th president of the United States. About 300 people, led by a grassroots coalition called Rise Up for Justice, marched from Plaza de Cesar Chavez, around the Robert F. Peckham Federal Building and onto City Hall, where the crowd swelled to about 500 as the rain eased to a drizzle.

Activists and officials traded the microphone with orators, poets and singers before clearing the way for Akoma drummers and Aztec dancers. In a semicircle around them, people brandished signs defending the rights of the disabled, queer, foreign-born, working class and otherwise marginalized.

As motorcycle cops trailed the march and kept a respectful distance for most of the day, their colleagues—including a pair of snipers—kept watch from above.

“I saw maybe one or two of them on top of City Hall,” says Tamara Alvarado, head of the School of Arts and Culture at Mexican Heritage Plaza. “I was like ‘Huh, there’s a dude up there.’ It seemed to me that they were there to protect other officers and everyone else.”

Still, Alvarado recalls thinking, better a few San Jose police snipers than the rifle-wielding Homeland Security detail she saw outside the U.S. District Court that morning. “The federal building, which we circled about three times, was very heavily guarded,” she says. “It was a lot more tense, by far, than City Hall.” 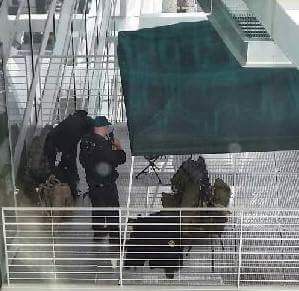 A source inside City Hall snapped a cellphone picture of one of the SJPD snipers, which ignited a conversation in activist circles about how San Jose polices public assembly. The grainy visual of a sniper rattled many of the protesters, while organizers were concerned that the Inauguration Day protest appeared more heavily policed than the Women’s March, which by some estimates drew upward of 30,000 people to those same streets the next day.

“That’s just horrifying that they had that level of readiness when it was a peaceful protest,” says Ruth Silver-Taube, an employment rights attorney who regularly volunteers as a legal observer at political demonstrations. “Then you contrast that with the Women’s March, where I saw barely any police presence.”

SJPD Chief Eddie Garcia confirmed with San Jose Inside that the snipers—called “overwatch” in police parlance—were assigned to the Jan. 20 event and not the much larger event a day later. But he declined to explain why, citing officer safety.

“We don’t want to give our hand for tactical reasons,” Garcia says. “It is a tool that we use, and that’s not a secret. But we certainly can’t say for which events we have overwatch and which ones we do not, and we’re not going to get into whether we have a specific threat or not.”

Broadly speaking, Garcia says, SJPD reserves the right to deploy so-called protective overwatch for any “large group” gathered for a specific reason. Snipers provide an added layer of security and surveillance for visits from high-profile dignitaries, or to law enforcement during an officer’s funeral at the SAP Center, or major events like the Super Bowl at Levi’s Stadium in 2016.

“Our No. 1 priority is to stop some sort of active threat that’s occurring in the crowd,” Garcia says. “Ultimately, it adds security and safety for officers, but the primary reason is to try to mitigate any act of violence that’s occurring on the ground.”

“That’s the only other time I’ve heard of overwatch,” Schlosser says, noting that he has witnessed three decades of protests as an ACLU attorney. “And in that case, the Justice Department specifically criticized the use of snipers this way. It’s not justified and not effective in a crowd control situation.”

In its scathing Ferguson report, the Justice Department condemned police for deploying overwatch so visibly. While snipers may be appropriate to protect police and civilian lives in certain situations, such as when there’s an active shooter, the report deemed it heavy-handed for peaceful protests. Garcia says he has taken those findings into consideration.

“We are very judicious about when we use overwatch,” he says. “There are a few things they did in Ferguson that we would not have done here.”

San Jose’s overwatch team surveys the scene through binoculars, Garcia says. Ferguson officers, on the other hand peered at protesters through the scopes of rifles trained at civilians, according to the DOJ.

“This is for community safety,” Garcia says. “We need to ensure that we prepare ourselves as best we can for when evil strikes.”

San Jose Inside obtained the operations plans for the inauguration day protest (click here to read) and the women’s march (read here), but any mention of the snipers must have been redacted (see here). According to the records, however, it looks like SJPD assigned 27 officers to police the Jan. 20 event and 14 for the march on Jan. 21.

Transparency is a work in progress in San Jose, where conversations about police militarization and surveillance predated Garcia’s tenure as the city’s top cop. Under his predecessor, Larry Esquivel, public backlash forced SJPD to ground a drone until it drafted a robust policy to govern its use. Also under Esquivel’s watch, San Jose returned a mine-resistant, tanklike military truck it quietly acquired from the Pentagon. Garcia says he regrets giving up the MRAP, or Mine-Resistant Ambush Protected vehicle, which helped law enforcement respond to the San Bernardino terrorist attack in 2015.

“I wish we had sat down and talked to the community and handled it the way we did with our drone,” Garcia says, adding that subsequent attacks at Pulse nightclub in Orlando and against police officers in Dallas underscored the need for greater precaution.

Several local activists say they would like to see SJPD handle overwatch that way, too, with open discussions about policy so that police and the public are on the same page.

“Some of us have been marching and dealing with police presence for years,” Alvarado says. “If I was to offer unsolicited advice to Chief Garcia, I would say let’s do parity.”

At the annual May 1 demonstrations, which trace the footsteps of Cesar Chavez and Larry Itliong through San Jose’s East Side, the police presence has historically been far more visible than what Alvarado saw at the Women’s March.

“I was at the Women’s March, too, with my kids, and we saw so many people helping out with security as volunteers,” she says. “Maybe that’s part of why they didn’t see a need to bring police out in full force. But you know, we have security teams, too, so maybe we can work something out so that San Jose can ease up on the police presence at our march.”

Ironically, San Jose came under fire for being too passive during Trump’s campaign stop at the McEnery Convention Center last summer. Trump supporters sued the city, claiming Garcia and Mayor Sam Liccardo allowed the scene to devolve into chaos.

“We’ve learned a lot of lessons,” Garcia says. “We’ve gone through a lot of courses and training with regards to how to handle crowd control situations. You have to be temperate with your response, you have to give the opportunity for people to peacefully demonstrate and exercise their rights and you have to keep enough distance between two opposing groups.”