Measure C took center stage on Monday evening at Santa Clara’s town hall on what city officials describe as “dark money,” despite attempts by the city’s top election official to steer the discussion away from the controversial ballot initiative.

The session organized by Santa Clara City Clerk Hosam Haggag to answer residents’ questions on the city’s campaign finance law was described as educational. With election day less than a week away, however, the timing raised questions as to whether the forum was intended to influence the results of a hotly contested ballot initiative that will determine how Santa Clara will govern itself for years to come.

It thrust the city clerk—normally a low key role characterized by neutrality—into a political role amidst a high profile, polarized debate.

Enacted in May 2018, the dark money ordinance requires organizations to disclose the source of political donations of $100 or more. The local rule is much stricter than California’s dark money law, which only requires disclosure when contributions amount to at least $50,000.

The meeting’s discussion, however, instead veered heavily toward Measure C: a March 3 ballot initiative that would reduce the number of council districts from six to three. In 2018, a Santa Clara County judge ordered the city to switch to six districts—not three—after Santa Clara lost a California Voting Rights Act lawsuit that said its current system violated the rights of Asian American voters.

The initiative has turned the Mission City into a battlefield, pitting the 49ers, advocates and even California Secretary of State Alex Padilla against Mayor Lisa Gillmor and her pro-Measure C allies. Critics of the initiative have also accused Santa Clara officials of illegally using public funds and resources to promote its passage.

In an effort to distance himself from the politicking, Haggag repeatedly contended Monday night that the meeting wasn’t about Measure C, stating that he was “impartial” and “unbiased” in the controversy. But Haggag later revealed that city officials scheduled the town hall to highlight what city leadership maintains is a violation by the 49ers its opposition to Measure C.

Haggag sent out seven warning violations—four to individuals with the 49ers, two registered lobbyists and one polling firm. The next business day, the organization submitted its campaign finance forms. The 49ers say they filed when the results were turned over to the campaign, as required, but that the law did not require disclosure until the survey results were put to political use.

“When we see that they spent $17,125 on that poll that happened in December without disclosing who they were until they were caught, that is a clear violation of the dark money ordinance,” Haggag said. “Last week they filed their expenditure report. This was the very first public admittance of actually being behind that survey.”

Haggag added that the 49ers No on C campaign also filed state disclosure forms late for the more than $600,000 it dumped into opposing the initiative. He has since reported the late filing to California’s Fair Political Practices Commission.

Wes Mukoyama, one of the plaintiffs in the original lawsuit, lambasted Haggag for the meeting’s focus on Measure C. “I have nothing to do with the 49ers,” Mukoyama said. “I’m just a resident of 45 years here. I wish this does not focus on Measure C, but it seems to be all about Measure C.” 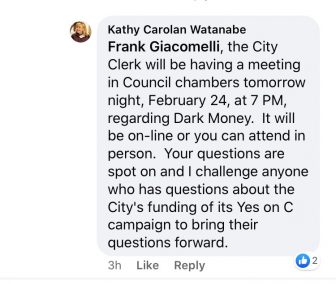 Haggag once again maintained that the meeting wasn’t staged to advocate for or against any measure.

“If we had the dark money ordinance back in 2016, we would have had a similar town hall talking about this for Blue PAC,” he said defensively. “But we didn’t have it then and that’s why this is a first-of-its-kind ordinance in any local jurisdiction to be able to root out the source of money.”

One Santa Clara council member, however, seemed to have a different view of the meeting and its focus.

Councilwoman Kathy Watanabe wrote a comment on a “You know you're from Santa Clara when ...” Facebook group on Monday, “I challenge anyone who has questions about the city’s funding of its Yes on C campaign to bring their questions forward.”

The post, along with Watanbe’s comments, has since been deleted.