Santa Clara County has released its final environment review of Stanford University’s expansion plans. The massive document, which runs about 2,400 pages with another 8,000 in appendices, suggests ways to temper the impact of building 2.3 million square feet of new academic facilities and 3,150 housing units over the next 20 years.

It’s the largest project ever reviewed in the county’s 168-year history.

The just-published bureaucratic tome, officially known as the Final Environmental Impact Report, includes thousands of public comments about how expanding the 133-year-old campus would affect local neighborhoods, traffic and schools.

“I realize the document is a large one,” county Board of Supervisors President Joe Simitian said in a news release Thursday, “but it’s important the public review the portions of it that are of greatest interest to them. That way when it comes time to consider approval, we’ll have the benefit of hearing from them one more time.”

At the core of the report is Stanford’s request for a general use permit to add more than 3.5 million square feet to the campus to accommodate 9,000 additional students by 2035. The last time it applied for this kind of permit from the county was in 2000.

The process surrounding the latest iteration, however, is unprecedented in more ways than one. For starters, there has never been this volume of public input on a county project, let alone a Stanford proposal.

Meanwhile, county officials are treating this differently that other projects by exploring a possible development agreement. Unlike a typical deal involving environmental reviews that suggest ways to mitigate impacts, development agreements are open-ended negotiations about what community benefits the applicant could offer.

Simitian said the final review released this week—in two parts, given its size—is a critical starting point for those negotiations.

“It’s impossible to know what you would like to request if you don’t know what you can require,” Simitian remarked. “With publication of the [final review], we have a much better sense of the project’s impact and the universe of potential mitigations.” 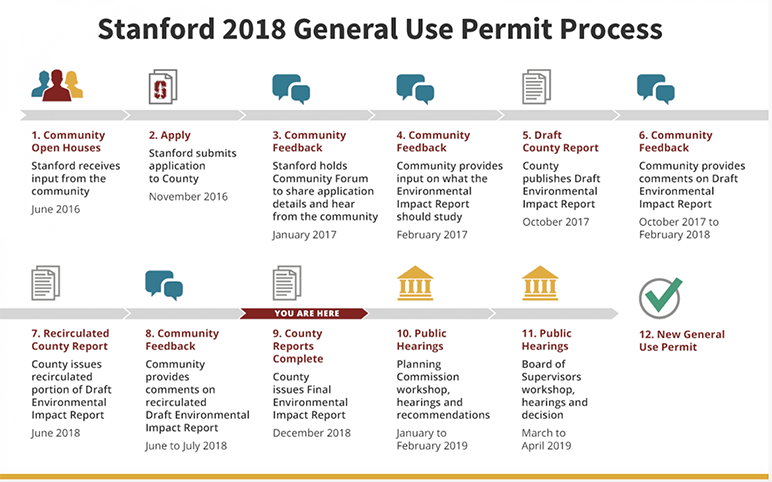