Smith’s comments were made to San Jose Inside in an Oct. 19 article about the scheduled hunger strike, which was set to begin this past weekend and which already began in Alameda County days before. Retired Undersheriff John Hirokawa, who’s running against Smith in 2018, criticized the way his former boss handled a hunger strike last year, accusing her of striking a deal with gang members in violation of county policy.

“Hirokawa is wrong,” Smith told San Jose Inside last week. “We are fixing his problems and he knows it. Further, we do not allow gangs to run the jails—and some of them could stand to lose a little weight. We will give their fresh food to the Salvation Army again. There are hungry people who committed no crimes and deserve a dinner.”

Jose Valle, a spokesman for Prisoners United, said those remarks flew in the face of good faith negotiations between his group and jail administrators. It took a few days for word to spread of the sheriff’s comments, but once Elmwood and the Main Jail inmates heard about the change in course, they began denying meals.

“All of this would have been definitely avoided if it weren’t for Laurie Smith’s comment,” said Valle, a former inmate who works for civil rights group Silicon Valley De-Bug. “What she said did three things. Number one, it was just flat out disrespectful and had no weight to it. Everything she said was non-factual. ... Secondly, it undermined efforts that were already made between jail administrators inside her organization. And third of all, it got officers to not comply with the agreement we set, so there were lockdowns and visitation cancelations and other retaliatory actions because of this.”

Larry Lucero—an inmate awaiting trial in the biggest gang case in South Bay history who became a de facto spokesman for a five-day hunger strike in 2016—told San Jose Inside on Thursday that more people participated in this week’s protest than the one last year. But it’s a balancing act, he said, because inmates are trying to honor the jail’s command staff, which they feel negotiated in good faith, while demonstrating against Smith.

“I believe they, too, were blindsided by Laurie Smith,” Lucero said in a three-way phone call from the seventh floor of the Main Jail. He referenced the following points enumerated by Prisoners United in response to Smiths’ brief, inflammatory statement.

“We had something that was historically rare, nationally rare,” he said. “You had an inmate coalition articulate a set of demands about changing systemic issues, and you had a jail administration that actually came to the table and met with community supporters and mutually resolved issues in a way that satisfied both parties.”

Those demands were to end arbitrary—as opposed to behavior-based—security classification, as well as to end group punishment, isolation, overly restrictive visitation and “cruel and unusual” penalties during out-of-cell time.

“And then,” Jayadev said, “Sheriff Smith, out of anger, destroyed all that goodwill effort by her own staff.” 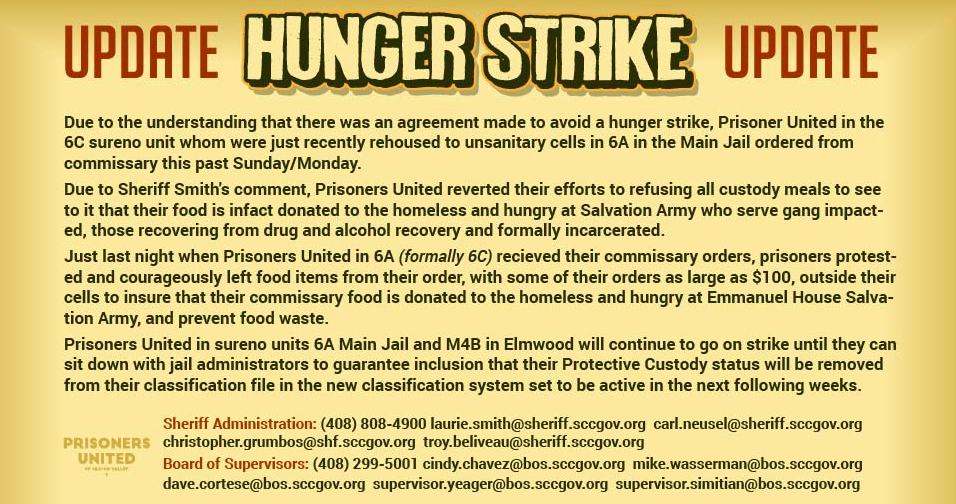