But that’s just part of the story.

News coverage of Good Samaritans footing bills for unpaid school meals overwhelmingly celebrates the gifts without challenging systemic realities that create a need for them in the first place. Left largely unanswered is the question of why, in one of the wealthiest regions of the wealthiest nations, is lunch debt at public K-12 schools even a thing?

A growing coalition of local policymakers say it shouldn’t be. At least not for the neediest schools in Silicon Valley.

With that in mind, the Santa Clara County Office of Education, Second Harvest of Silicon Valley and the YWCA of Silicon Valley are coalescing behind an initiative to provide universal meals at up to 84 campuses in 17 local school districts.

Come Tuesday, Santa Clara County Supervisor Susan Ellenberg will pitch the idea to her colleagues on the five-member Board of Supervisors. The proposal co-sponsored by Supervisor Joe Simitan would direct the county to explore the feasibility of spending $8 million to feed 12,000 impoverished kids over the next four years.

That breaks down to 60 cents a plate.

“From this action tomorrow, we can see more kids in school, we can know that they’ll behave better—which is not only in their interest but the interest of every kid in the classroom—and that they’ll learn more,” Simitian said at a Monday morning press conference. “I can’t do anything except expect a 5-0 vote. That is my hope.” 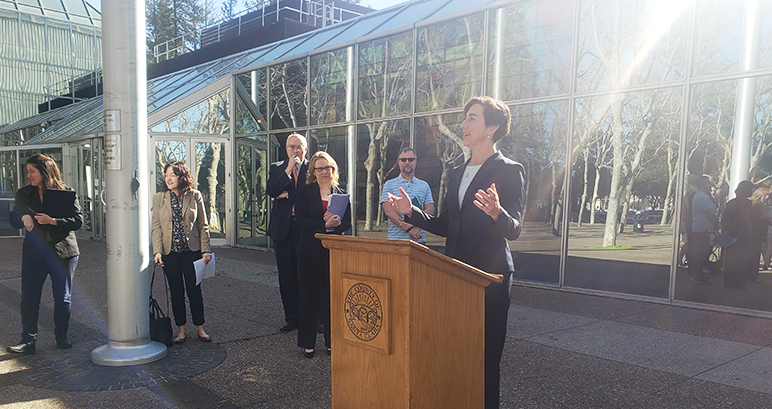 In a policy memo detailing the plan, Ellenberg describes how the county plays a vital role in addressing child hunger by administering CalFresh and nutrition programs for women and infants. But federal rule changes designed to dissuade undocumented immigrants from accessing safety net services has made it increasingly difficult for the county to extend support to families in need, the memo goes on to state.

The U.S. Department of Agriculture began offering additional funding in 2015 for high-poverty schools to provide universal meals to K-12 students. Yet in the five years since launching the program, just half of eligible campuses nationwide have taken advantage of the reimbursements because they lack the up-front resources to get started.

In California, only 15 percent of qualified schools have availed themselves of the financial boost—the third lowest state participation rate in the nation.

It’s not for a lack of need.

Just 68 percent of students poor enough to qualify for subsidized school lunches in Santa Clara County are signed up for them. Only 35 percent of students eligible for school breakfast take advantage of the program. According to local school officials, that leaves nearly 30,000 children countywide without midday meals and 55,000 without breakfast.

“In the midst of so much plenty,” Second Harvest CEO Leslie Bacho lamented, “we still see so many people struggling to make ends meet.”

As Simitian sees it, three barriers stand between eligibility and access: bureaucracy, fear and stigma. Extending meals to all students at high-poverty schools counteracts those factors, he said, by eliminating the paperwork and assuaging concerns among immigrant families about information being shared with federal authorities.

That certainly held true during Ellenberg’s tenure as a San Jose Unified School District trustee when she took part in an effort to encourage more families to sign up for meal subsidies. Instead of assigning SJUSD staff to single out only eligible families, the district required all households to submit applications for the program. The plan worked, to some extent, upping participation rates by about a third.

“But we still had that gap,” Ellenberg recounted.

Now, halfway through her first term as county supervisor, she’s taken up the cause once more. This time, by assembling a coalition of public agencies and non-profits to tackle the problem from multiple angles.

The Santa Clara County Board of Supervisors meets at 9:30am Tuesday at 70 W. Hedding St. in San Jose. To peruse the entire agenda, click here.