Frank Sinatra’s ode to The Big Apple is just one of many great songs about New York. Los Angeles has “L.A. Woman” and its very own Randy Newman sendup, “I Love L.A.” And San Francisco has two flavors of whimsy—Tony Bennett’s “I Left My Heart in San Francisco” and Scott McKenzie’s starry-eyed flower-power anthem, “San Francisco (Be Sure to Wear Flowers in Your Hair).”

San Jose has its own pop-paean, too. The Burt Bacharach- and Hal David-penned Dionne Warwick hit “Do You Know the Way to San Jose” charted all over the world when it was released in 1968. Sure, it was corny; Burt Bacharach songs usually are. But it had, and continues to exude, a certain genuine charm.

With San Jose’s newfound cachet as a preferred venue for major conferences produced by Apple, Facebook and Google, Kirchgesler is riding high in growing and managing the convention franchise. Bar charts and hockey stick graphs attest to Team’s accomplishments on the financial end.

Described by Chmielewski as a “love letter to San Jose,” the song “San Jose” is a pop-country tune, replete with twangy fiddle and fond memories of the singer’s first guitar. The song was penned by a teen-aged girl from Down Under—who, the story goes, happens to have a soft spot for the Capital of Silicon Valley.

“Meet Grace Kelly,” the press release chirps, “a 16-year-old singer-songwriter from Auckland, New Zealand. She’s been singing since she was little and in the last 5 years, she found her love for songwriting. She first came to San Jose when she was 8 years old and it quickly became her home away from home. ‘I fell in love with San Jose and all of the memories that were attached to it. My dad even bought my first electric guitar right here in San Jose.’ Since then, her dad has moved back to New Zealand two years ago, but she still holds her memories of San Jose near and dear to her heart.”

Team’s promotion hits some legitimate touch-points of the city’s culture in a quest for highlighting what former board chair Michael Mulcahy in his remarks referred to as “authentic experiences.” Another promo video showed millennials tipping tasting glasses at Camino brewery and sawing into farm-to-table steaks at the Grandview restaurant.

Is the teenage Kiwi—who hasn’t even spent a decade in San Jose—the right musical icon to capture the city in a remotely authentic way? And will this municipal branding exercise gain traction in shaping the city’s culture? We’ve been trying to escape that Dionne Warwick song for half a friggin’ century.

And what about the South Bay’s own musical heritage? The Grateful Dead, The Doobie Brothers, Smash Mouth and Peanut Butter Wolf? These are just a few of the more recognizable artists that have emerged from our region and there are plenty more to throw in the heap. Quirky psychobilly singers, like The Legendary Stardust Cowboy; psychedelic pioneers, such as The Chocolate Watchband; and more skate punks than you can shake a deck at, including The Faction.

Each of these artists have far more invested in San Jose than Kelly. They are truly and authentically South Bay bands with South Bay stories. Though some might decline the offer to soundtrack a promotional video produced by the tourism board, they should at least be offered the opportunity.

In the meantime, city boosters will be watching the streaming counters on video services and Pandora, where the tune will be served up. 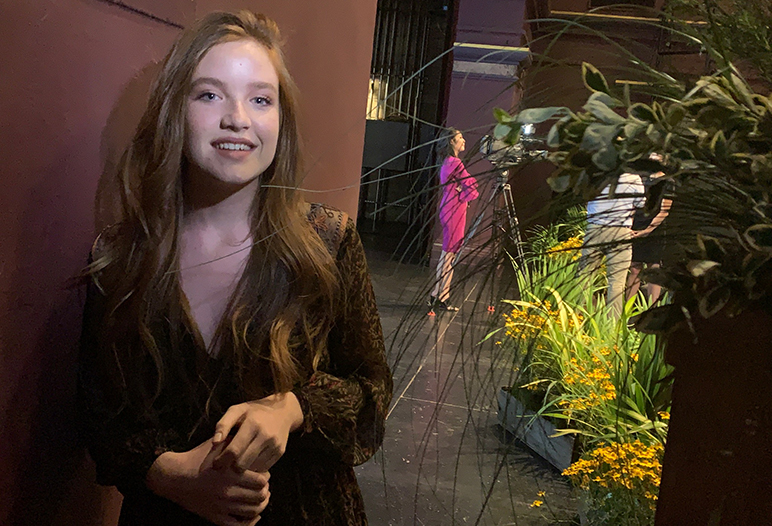 Grace Kelly joined TSJ at the Montgomery Theater to unveil her musical ode to San Jose. (Photo by Dan Pulcrano)