When Brian Jones opened up his water bill last September, he knew something was wrong. The San Jose resident, who typically pays around $200 per bi-monthly cycle, was charged nearly $1,700 for a reported use of 3,000 gallons a day in his Almaden Valley home—and with no conceivable cause.

To put that number into perspective, the average American uses about 88 gallons per day, or 14 centum cubic feet of water per month (expressed in “ccfs” on the bill, the industry-standard designation). Jones, who lives with three other adults, was billed for using 236 ccfs within the months of July and August—up to 10 times what his household uses on a regular basis, enough to fill a dozen backyard swimming pools.

Jones immediately complained to the San Jose Water Co., an investor-owned utility that serves more than 1 million people in Silicon Valley and has a reputation for questionable billing practices. A field worker from the water retailer then checked his home for leaks and, finding none, extracted his water meter to test its accuracy in the company’s shop.

When results showed that his meter was reading correctly, the company concluded that Jones had somehow used the reported amount. Jones, who is unemployed and couldn’t afford to pay the full charge, tried to the settle the dispute with a good faith payment of $250, which based on past usage would be considered a high bill for his household.

Four months later, when the water company shut his water off, he had no choice but to cough up the remainder of that bill, causing him to rack up his credit card debt and take on additional interest fees each month.

As Jones recounts the ordeal, his voice stiffens.

“It is a genuine hardship,” he says. 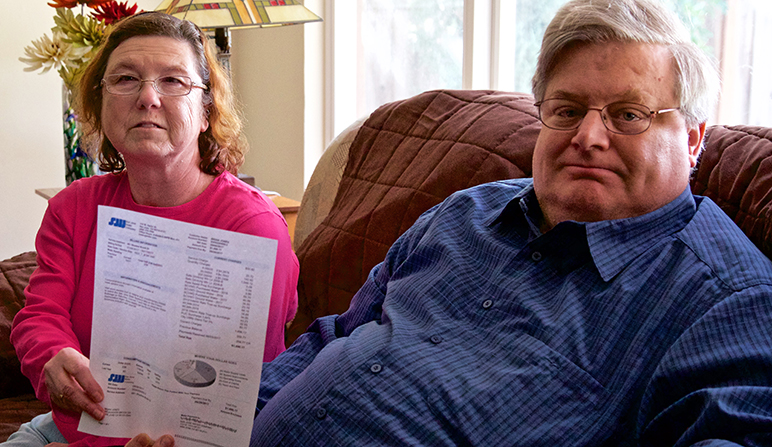 Brian and Aimee Jones with their $1,696 water bill from September 2017 in their San Jose home. (Photo by Kevin N. Hume)

Other San Jose Water customers have complained about drastic spikes in their water bill. Rita Benton, a Saratoga resident and leader of activist group WRATES—short for Water Rate Advocates for Transparency, Equity and Sustainability—says this is a common issue in the company’s domain.

San Jose Water has over 240,000 connections throughout Silicon Valley, making it the largest water retailer in the region.

Toward the end of the last year, Benton and WRATES member Bill Sherman began noticing several hundreds of posts on the social network Nextdoor, which connects members within a certain neighborhood, about people with unusually high water bills.

About 40 of the 377 posts Sherman tracked down in the Almaden Valley group recount a near identical story to Jones’, wherein households that typically use 20 to 30 ccfs per billing period were being charged for using well over 100 ccfs within the same time frame.

“There are too many of these to be coincidence,” Sherman says.

Malcolm Bordelon—a San Jose Water customer, former publisher of the Silicon Valley Business Journal and former San Jose Sharks exec—lives a mile away from Jones in the Graystone neighborhood in Almaden. In January 2016, Bordelon was billed $1,219.13 for a water usage of 107 ccfs. That’s nearly a 500 percent increase from the 18 ccfs that he and his wife used during the same period a year prior.

“It’s simply not feasible that we used that volume of water,” Bordelon says.

A field inspection of his home and a water meter test were conducted at his request. However, there were no leaks and his meter tested accurate, leaving Bordelon with no explanation as to why this particular bill was so high.

In a letter responding to Bordelon’s complaint, San Jose Water Customer Service Superintendent Kristine Jordan describes his case as “an unexplained escalation in water usage.” She adds that the company has “no responsibility beyond the meter” and concludes that “the bill is an accurate reflection of water used at the property.”

“The formal complaints don’t go anywhere,” Benton says. “The CPUC does what they usually do and sides with the water utility.”

Benton isn’t the first to question the commission’s integrity. Many people have criticized the CPUC for being too cozy with the top brass at the utility companies like San Jose Water, whose annual petitions to bump up profit are almost always approved by the state. The CPUC has allowed the company to increase its rates by an average of 20 percent a year since 2013.

This month, Benton emailed the CPUC’s Water Division, urging its members to investigate the issue of erroneously high water usage.

“They told me that this isn’t in their jurisdiction,” Benton says. “If the Water Division can’t deal with it, who deals with it?”

When the final outcome of an appeals process hinges on regulators who seem to be asleep at the wheel, customers are often left with no choice but to pay up.

San Jose Water gave Bordelon a “one-time courtesy adjustment” of $562.67 to offset drought surcharges—penalty charges for customers who exceed drought usage allocations set by the company—but offered no recourse for the rest of the bill.

“It feels futile,” he says. “You don’t know what you can do. I can’t win because there’s no way to prove, other than logic, that I didn’t use this volume of water.”

William Carlson, another San Jose Water customer who lives in the Graystone area, also filed a formal complaint with the CPUC after receiving a $4,711.20 bill for using 366 ccfs in September 2016.

“The prior billing was $313.72 for 38 ccfs, so something was seriously wrong,” Carlson tells San Jose Inside.

Despite the precedent set in Bordelon’s case, Carlson remains hopeful that the commission will rule in his favor later this month. “My guess is that we have a 50-50 chance of prevailing,” he says.

Meanwhile, the cause of these sudden upticks remains unclear. In all three of the cases mentioned, meters reported normal levels of water usage in billing periods directly before and after the spike, despite any notable changes in a household’s lifestyle during that time.

“The underlying mystery is the fact that the meter is running normally, it reports a high number, and then it goes back to reporting normally,” Jones says.

Residents speculate that the high meter readings could be caused by external factors, like air pressure or debris buildup in their water lines. However, they have yet to come across any concrete data that proves either possibility could result in enormous meter readings.

“There are no causes that I can offer you,” San Jose Water spokeswoman Jayme Ackemann says. “If the meter is performing accurately, then the water is being used on the customer’s side somewhere.”

Dina Thatcher—the company’s meter shop supervisor—says about five to six people request meter tests each month as a result of irregularly high readings on their bill. Since San Jose Water performs tests for other water utilities throughout the state, some of these complaints come from several hundred miles away.

Thatcher says that in the past five years, only one of these tests showed that a meter had over-read the amount of water a customer used.

“Normally, a water meter doesn’t run faster,” says Thatcher, who explains that it’s far more common for a worn meter to slow down and under-read water use.

Inside the meter shop on Bascom Avenue, a technician places a water meter into a test bench built by MARS Company—an industry standard. The meter is manufactured by Neptune Technology Group, whose T-10 model is used in almost all of San Jose Water’s residential connections. In addition, all of the shop’s equipment complies with the American Water Works Association’s testing standards, Thatcher says.

Everything in the room looks pristine and logical—exactly what one would expect from one of the most expensive water retailers in the state. Yet, customers remain weary of the company’s commitment to its own machines and numbers.

“It’s my word against the meter,” Bordelon says.

And while machines say one thing, the people of San Jose tell quite a different story. Unlike internet and energy providers, a person’s water utility is predetermined by the location of their home. This means Bordelon and others could be hit with another inexplicable bill in the future.

“I’m very concerned,” Jones says. “I’m paranoid that this could happen again because we never found a root cause.”

A Neptune T-10 water meter gets placed into a test bench at San Jose Water’s meter shop on Bascom Avenue. Almost all of the company’s residential customers have this type of meter. (Photo by Camille Miller)