A corruption scandal involving a school board member in southeast San Jose could have legs beyond campaign embezzlement.

On Thursday, the Santa Clara County District Attorney’s Office charged 55-year-old John Linder, a trustee for the Franklin-McKinley School District, with grand theft, perjury and violations of the state’s Political Reform Act. The DA accused Lindner of using campaign funds from a 2010 bond measure to give a $12,000 loan to a relative while also spending $16,000 on personal expenses, including airplane tickets and lumber.

Allegations against Lindner became public in October, when an agenda for the Fair Political Practices Commission (FPPC) noted that he had agreed to pay back $18,550, according to the Mercury News.

John Chase, a prosecutor in charge of the DA’s Public Integrity Unit, noted in a statement that the situation was made worse by the fact that Lindner raised much of the money from special interests that could have had business in front of the Franklin-McKinley board.

“Aggravating matters is that nearly all of the money donated in support of the school bond measure came from developers, contractors and architects,” Chase said. “While at the same time the defendant, who kept much of this money for his own use, was a member of the school board that makes decisions about how the bond money will ultimately be spent.”

Less than two years after voters signed off on a 2010 bond measure to improve aging schools in one of the city’s poorest areas, Lindner “bled the account almost dry” while continuing to file phony campaign disclosure forms, prosecutors said.

The county Registrar of Voters reported suspicions that something was amiss to the FPPC after the trustee tried to close out the account in 2016. In his final report, he noted that the remaining balance in the account—more than $13,000—had been distributed to to “Unnamed Civic Donation Recipients.”

Lindner turned himself in Thursday and was released on $35,000 bail. He could face jail time and a fine of more than $250,000 if convicted on the misdemeanor counts.

It’s unclear if Lindner remains an active member of the Franklin-McKinley board. A call to district spokeswoman Yelitza Peña was not immediately returned, and an assistant for Superintendent Juan Cruz, who was off-site Friday afternoon, declined comment.

Lindner’s Twitter account shows that he was still retweeting the district’s social media posts up until 6:30am Friday, a little less than a day after he turned himself into authorities. Up until this summer, Lindner spent the past 29 years working as an elementary school teacher for the Oak Grove School District in San Jose, according to his LinkedIn profile. 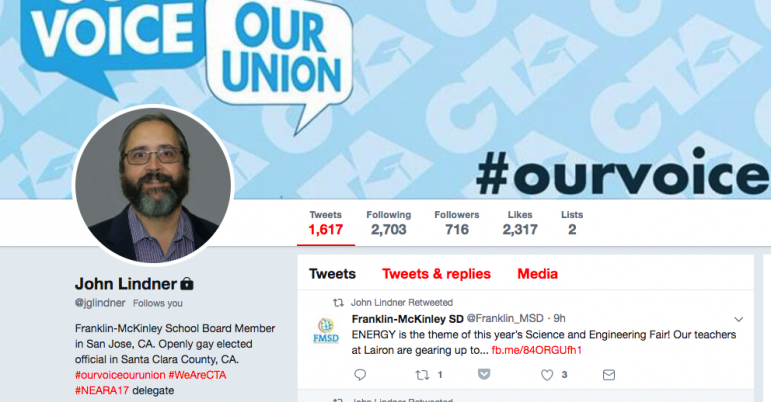