San Jose will take another step against illegal racing—this time going after its audience. The City Council on Tuesday will consider an ordinance making it a crime for anyone to attend a sideshow as a mere spectator.

Scofflaw street races, colloquially known as sideshows, are nighttime car exhibitions where highly and illegally modified cars gather on public streets to perform stunts such as drifts (intentionally oversteering at high speeds to make it appear as if driving sideways), burnouts (spinning a car’s wheels while stationary to cause its tires to heat up, smoke and make noise) and donuts (driving in extremely fast circles).

Sideshows often bring large crowds, which, when combined with the main event, can become a public danger, according to city officials.

“They pose a threat to the safety of San Jose streets as well as residents’ quality of life,” San Jose police Chief Eddie Garcia cautioned in a memo to the council.

Sideshows are often held at night and the early hours of the morning, and the noise from the gatherings have caused complaints from sleeping residents, he explained in his memo. They often take place at sizable intersections, which can cause traffic hazards for lawful drivers who just are trying to pass through.

When cops come to break up sideshows, according to the police chief, racers and spectators jump back into their cars and attempt high-speed escapes. Often, they go on to another location to start another sideshow. Even fleeing from a sideshow poses inherent risks, putting drivers in danger of crashing and spectators in danger of getting hit.

Although street racing has long been illegal in San Jose, Tuesday’s proposed ordinance would take the city’s laws one step further by criminalizing those who gather to watch them. Police say people have long taken advantage of that loophole to avoid arrest. 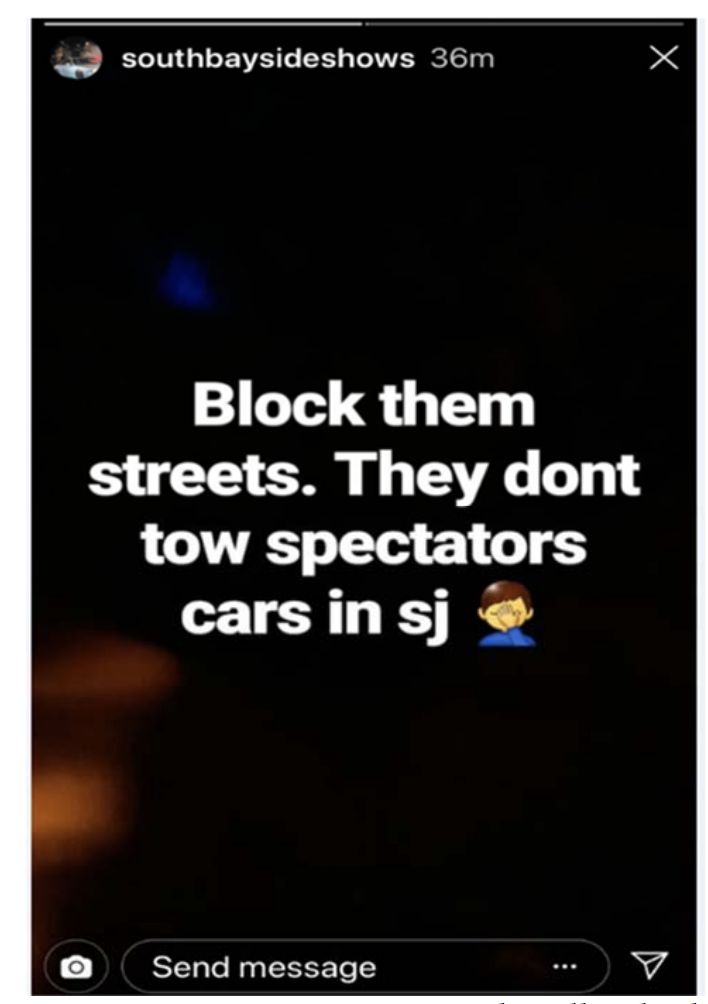 A social media notice reportedly posted by organizers of an illegal street race.

As indicated by police who have broken up sideshows and social media posts, spectators play an integral role in making sideshows the attraction they are. Spectators often post to social media, encouraging others to come to sideshow locations. Once at a sideshow, spectators encourage each other to block off intersections where stunts are being performed, as they can’t be convicted of participating.

A picture posted on social media obtained by the San Jose Police Department was captioned, “Block them streets. They don’t tow spectators in SJ.”

The city will define a spectator as anyone who is within 200 feet of a sideshow or planned sideshow with the intent of viewing or participating in it. The police will use several factors in determining intent to participate. Violators will be guilty of a misdemeanor and can be fined up to $1,000 and a possible jail sentence for up to six months.

A lack of a no-spectator law, according to police, also encourages other criminal activity such as gambling, gang fights, juvenile curfew violations, noise violations, drinking and urinating in public, vandalism and trespassing.

The new ordinance comes off the heels of an incident on Halloween last year, when about 200 people participated in a sideshow that spread across sections of Highway 101, Oakland, Gish and Senter roads and ended in tragedy when one of the participants struck a passing car, killing an innocent bystander. “This is not an isolated incident,” Garcia wrote. “Street racing predictably causes injuries and deaths.”

San Jose’s proposed no-spectator rule follows similar measures taken by cities such as Los Angeles and San Diego to help combat sideshows. Just two weeks ago, police broke up a sideshow in the city of Oakland after reports of people firing gunshots, shooting off illegal fireworks, looting a big-rig and a setting a bus on fire.

An estimated 1,000 people participated in that East Bay sideshow, where a group of spectators reportedly held the semi-truck driver at gunpoint.

“Given the important role spectators play in encouraging, popularizing and facilitating these events, discouraging their participation would be an important step in combating the problem,” Chief Garcia concluded in his memo.