Tavia Jones narrows her eyes in suspicion at a white pickup pulling up to the stone landing beneath the Highway 87-Interstate 280 interchange in downtown San Jose. Tucker Construction. The same city-hired company that descended on the encampment a day prior along with two dump trucks and four vans of orange-vested cleanup crews.

“They already took everything,” says Jones, leaning her wiry frame against a metal fence while observing the interlopers. “What else do they want?”

One of the contractors hops out of the truck with a plastic canister of disinfectant and starts spraying around the concrete columns. The other guy collects stray wrappers and bottles with a litter picker-upper.

“Oh, right,” Jones mutters sarcastically. “They gotta do a little extra cleaning because we’re so gross and disgusting.”

On Thursday, 44-year-old Jones lost everything for the eighth time this year. Gone are her dishes, toiletries, blankets, shoes, clothes, toys for her months-old mutt Piglet, a new roll of garbage bags and yet another tent. This time, at least, she didn’t have to endure the familiar heartbreak of losing handmade gifts from friends, family photos or other personal keepsakes—those were all seized in past expulsions.

Since her release from jail in 2015, Jones says the frequency of such evictions soared from a few times a year to about once every month. “These happen a lot more now,” Jones says, pausing for a beat to fight back a sob. “Like, a lot, lot more.”

On the same day of the latest sweep, the city affirmed what Jones knew anecdotally for years: that San Jose has been ramping up homeless sweeps at a staggering rate.

According to a new report by City Auditor Sharon Erickson, San Jose cleared homeless people out of their illegal camps this year at more than 11 times the rate it had in 2013. The number of sweeps soared from 49 five years ago to 563 this fiscal year, which pushed annual abatement costs from $1.3 million to $2 million in that same timeframe.

It’s a dizzying uptick, and primarily driven by a legal settlement with the San Francisco Baykeepers. A consent decree approved in 2016 requires the city to clear out 80 percent of the trash in Coyote Creek by 2019. That’s just the city. 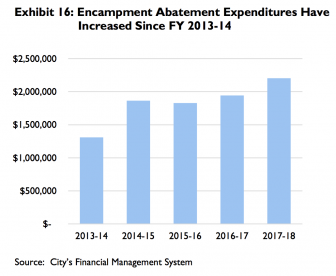 At a meeting in August, the Santa Clara Valley Water District reported that it dismantled 571 homeless tent settlements in the first eight months of this year alone—far surpassing the previous average of about 400 a year. It’s unclear how many more sweeps are conducted by Caltrans and marshals patrolling the Union Pacific Railroad.

The South Bay is hardly the only region escalating camp-clearing efforts as another 134,000 people joined California’s homeless population from 2016 to 2017. Faced with a burgeoning backlog of cleanup requests earlier this year, the city of Los Angeles asked to double its budget for sweeps.

But it appears that no other major city in California has upped the rate of camp cleanups as much as San Jose, where 74 percent of its 4,300-plus homeless people are unsheltered and where the death toll for the unhoused has been steadily increasing.

Incessant displacement wreaks a physical toll on the unsheltered, which may be what’s driving up mortality rates, says Shaunn Cartwright, a veteran advocate for the homeless. There’s also a relatively new legal case to be made against homeless camping bans.

A recent federal court ruling has prompted many jurisdictions to ease up on the sweeps because, the panel of judges argued, local ordinances that penalize homelessness are unconstitutional if the agency doesn’t otherwise provide adequate shelter. In Martin v. Boise, 9th U.S. Circuit Court of Appeals Judge Marsha Berzon wrote that criminal prosecution for people sleeping outside in public violates the 8th Amendment’s proscription against cruel, unusual punishment.

San Jose Housing Department officials say that’s not much of an issue here because the city—in addition to giving campers anywhere from a one-week to 72-hour notice—sends outreach workers to the site at least three times before eviction day to offer people alternative places to stay. Nonprofit service providers PATH and HomeFirst typically make the first two contacts, officials say, and the city’s homeless response team follows up on the day of the sweep.

“There are three times at a minimum that we offer anyone in the encampment shelter,” says Ragan Henninger, the city’s deputy director of housing. “On the day we do the cleanup, our staff is there and anyone who wants shelter will be taken to shelter.” 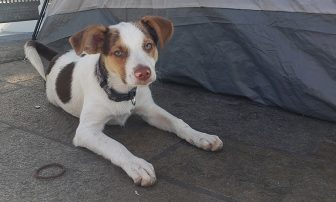 If only that were the case, Jones laments. She says that not once in the nine times she was swept this year was she extended an offer for services. And not once has she seen one of the paper notices of an upcoming sweep. Her friend Thomas Martinez, 34—another holdout from Thursday’s cleanup—says the same has held true for him.

“That would be nice if they did,” he says. “But most of the time it’s just the cleanup crew and the cops and a lot of yelling.”

It’s a common claim among the city’s homeless: that there’s a disconnect between city policy and practice. Erickson’s audit offers a possible explanation for the discrepancy.

Her staff’s new report notes that the city’s housing division has struggled to monitor its contracts with nonprofit homeless service providers, including the outreach teams from PATH and HomeFirst. Some of the city’s deals with nonprofits do not require them to submit a breakdown on services offered during the cleanups, according to the audit.

“For example,” Erickson’s report explains, “the city’s agreement with one grantee requires the grantee to provide outreach services to homeless individuals in San Jose to connect them with resources and services but does not require any reporting by location of encampment or results of those outreach contacts. Without this information, it is difficult to determine the overall extent of outreach performed in conjunction with an abatement action. It makes it equally difficult to track the effectiveness of abatement actions. Specifically, whether homeless residents were helped into housing, or whether the abatement action simply forced the problem to a different part of the city.”

Henninger assures that shelter placement, case management and other services are being offered, but that wasn’t apparent in the data Erickson reviewed because she happened to look at a year when the Housing Department was shifting its grant contracts from one set of agreed-upon outcomes to another. “So we knew there would be a year of transition where we weren’t going to meet the expectations, at least on paper,” Henninger explains. “It’s just unfortunate, because that’s the year that was reviewed for this audit.”

“I think it really highlighted some improvements we can make,” she says.

Until then, a coalition of grassroots activists are going to start passing out cellphone chargers so people living at the camps can document the sweeps. And they say will continue to fill in the gaps, in part by replacing the blankets, tarps and other necessities that tend to disappear in the relentless sweeps.

“That’s how I got this,” Jones says, motioning toward an orange tent someone donated to replace the one she just lost. “Maybe I can keep it a little longer than the last one.”